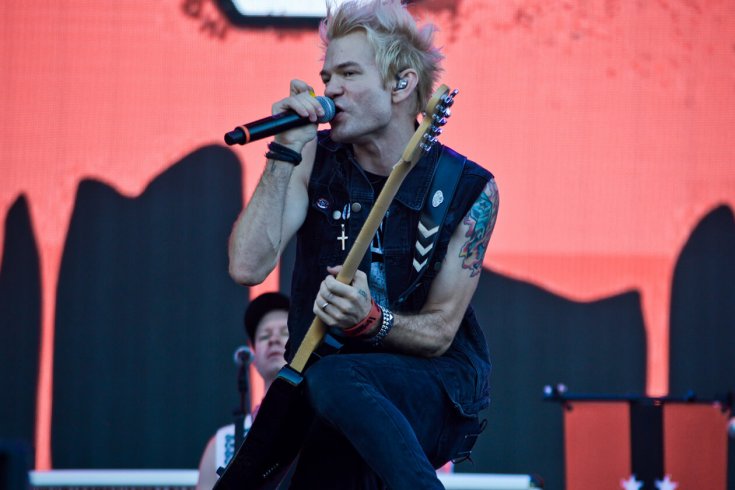 At the beginning of the video for Sum 41’s 2002 hit “Still Waiting”—the first single released after the Canadian pop-punk band’s multi-million smash album All Killer, No Filler—a Svengali-type manager argues with the band to change their name. “The number band thing is out,” he yells, gold albums arrayed on the wall behind him. “Blink-182, Green Day 75, these names are not cool.” What is cool now, he says, are “the” bands: “The Strokes, the Vines, the Hives, the White Stripes”—basically the laundry list of bands being heralded at the time by outlets like Rolling Stone as the “return of rock.”

Following his spiel is a live performance from the band that parodies the Strokes’ video for “Last Nite,” which itself echoed old-timey TV appearances from the fifties and sixties. It ends with four members of Sum 41 destroying the giant lightbulb letters that spell their new name—“The Sums”—a statement that at the time read as a rejection of rock trend-hopping. But given that many of the bands the manager lists rose to greater heights, and stayed there longer, than Sum 41, today the video is tinged with a different sort of defiance: we know we’re not cool, and we know our pop moment may not last—but we can still tear the house down.

If you’ve thought at all about Sum 41 since then, it probably wasn’t for a good reason. Maybe you heard the gossip about the divorce of frontman Deryck Whibley from Avril Lavigne, or saw those paparazzi photos of Whibley looking like death. Perhaps you’ve seen the photos from his hospital bed in 2014, when he actually was near death (Whibley’s heavy drinking led to liver and kidney collapse; he’s now sober.) Though the band has released several albums since the anarchic rebellion of the “Still Waiting” video, Whibley has perhaps gained the greatest cultural traction as a sad punchline from a fleeting past.

Yet Sum 41 seem improbably poised for a comeback with their new album, 13 Voices. Many of their upcoming shows have sold out, and Rolling Stone included 13 Voices in its list of the fall’s must-hear albums. It’s their first record since 2011, their first without original drummer Steve Jocz (Whibley’s main vocal foil on those early hits), and their first in a decade with original guitarist Dave Baksh—an essential part of the metal riffs and sensibilities that distinguished Sum 41’s sound from that of its contemporaries. The new album skews more in that direction than toward uber-infectious hooks, and, when paired with Whibley’s raspy voice, there are moments when it almost sounds like a late-era Linkin Park record. The degree to which you feel that this is indicative of a renaissance probably depends a great deal on your prior affinity for the band.

Except that, unexpectedly, pop punk is having a bit of a moment in 2016. Blink-182 is not only back in action—with Alkaline Trio guitarist Matt Skiba replacing founding member Tom Delonge—but doing so with a number one album (California) and its biggest hit in years (the very catchy “Bored to Death,” their first number one on the alternative chart in a decade and their highest-ranking song ever on the modern rock chart). Good Charlotte has returned as well, headlining this summer’s Warped Tour alongside the likes of New Found Glory, Yellowcard and Less Than Jake. And after lukewarm reaction to its 2012 trio of albums, Green Day has been ramping up the publicity machine for its new record, Revolution Radio.

All this, at a time when guitars seem harder than ever to find on the Billboard charts, dominated as they are by R&B grooves and retro ’80s synth sounds. Why pop punk? Why now?

Like any sub-genre of rock, defining pop punk is a messy business. Much of what we consider “classic” punk was decidedly poppy to begin with, its back-to-basics simplicity making explicit reference to the earliest years of rock ‘n’ roll. But the genre’s mid-nineties pillars—Green Day and Blink-182—do offer a foundation to work from: propulsive rhythms; palm-muted major chords that burst into tight, explosive choruses; nasal-yet-forceful vocal timbres; and a potent juvenilia at odds with the dominant “alternative” music of the era. These bands were often crude and sometimes clever as they sang about post-teenage anxieties, sex, and other experiences that lay enticingly beyond the age of their target audience, but tinged with a knowingly puerile sense of humour that brought everyone in on the joke.

Eventually, these bands grew up a little: Green Day became acclaimed Who-esque concept album rockers (American Idiot, 21st Century Breakdown), while Blink-182’s turn towards semi-seriousness led to some mid-aughts gems (“I Miss You,” “Always”) but mostly seemed to expose the band’s inner creative tensions. In the meantime, a new generation of pop-punk bands emerged, given the polarizing “emo” epithet due to their heightened sentimentality. But following the likes of My Chemical Romance and Fall Out Boy in the mid-to-late 2000s, pop punk’s influence on broader musical culture appeared to wane.

Just like kids in the ’90s and ’00s were drawn to Pink Floyd or Led Zeppelin as signifiers of rock importance, now the music of my own youth fits the bill.

Given this, it’s tempting to chalk up the current pop-punk revival as simply the latest turn in the nostalgia cycle: the maturing of a generation eager to revisit its original coming-of-age soundtrack. “It’s something every generation has to grapple with,” writes Stereogum’s Chris Deville, reviewing Blink-182’s California, “but like college, marriage, raising children, and watching your loved ones die off one by one, this phenomenon feels new and uncharted when it happens to you.” But the crowds going to Warped Tour year after year aren’t all aging punks—many of them actually fall within the teenage target demographic. There’s more than nostalgia at play: pop punk is becoming classic rock.

That may seem like a small distinction, but it’s an important one. When classic rock emerged as a radio format in the 1980s, its initial audience was undoubtedly the baby boomers who were much more interested in revisiting the favourite hits of their youth than listening to emerging genres of pop and rock. But through its popularity, classic rock essentially became a genre in and of itself, supporting not only the artists from that era who continued to record and tour, but also welcoming new bands that sounded like those artists.

In Halifax, where I live, I was initially taken by surprise when our first “modern rock” station started a few years ago and played as many songs from the 1990s as it did from this century. We’re further away now from the ’90s than “classic rock” was from the ’60s and ’70s when it first became a format, after all, rendering the word “modern” slightly ironic. But ’90s rock, with pop punk as a key element, has become its own classic rock for a new generation—not just a nostalgia experience, but a marketable sound in its own right, one that feels more significant by having a bit of historical weight behind it. Just like kids in the ’90s and ’00s were drawn to Pink Floyd or Led Zeppelin as signifiers of rock importance, now the rock of my own youth fits the bill.

There are, of course, new bands making vital records built on pop punk sounds. One of my favourites of 2016 is Holy Ghost, a tense, catchy album from Philadelphia’s Modern Baseball that features the band’s two songwriters each taking a side of the record. One of the best-reviewed albums of the year is The Hotelier’s Goodness, and while the Wonder Years’ most recent album didn’t quite hit the same highs, I frequently revisit their 2013 album The Greatest Generation and its dizzying sprawl of quarter-life crisis anthems.

None of these bands are necessarily headlining Warped Tour’s biggest stages, though; as Amanda Petruish notes in the New Yorker, the genre is not commercially ascendant in a broader sense. The closest it’s come in recent years might have been Australia’s 5 Seconds of Summer—notably marketed not as a punk band, but closer to a One Direction-style boy band. “Rather,” Petruish writes of current pop punk, “it seems to have invaded young hearts and minds as an artifact.”

For bands like Blink-182, this works out just fine. Deville quotes Pitchfork’s Jeremy Gordon on the benefits of this approach: a band can “recycle their iconography without losing their edge, as far as casual and younger listeners are concerned.” But now that Green Day is in the Rock and Roll Hall of Fame—and, honestly, it wouldn’t be surprising to see Blink-182’s name show up there someday—that process is beginning to show the modern limitations of rock’s backward-looking sensibility. “Once [the Rock Hall] gets to Radiohead, or the Strokes, they’re going to run out of bands,” said critic Rob Harvalla on the Celebration Rock podcast recently. “They’re not a renewable resource.”

Maybe not on that scale, no. But the energy of pop punk remains potent, even in its recursive, classic-rock form. 2016 has been a bit of a snoozer in terms of hit singles: many of the most popular songs have a sleepy, boring self-confidence (Drake’s “One Dance,” the Weeknd’s “Starboy”) or feel like an unwieldy, party-ready smorgasbord lacking a core (anything by the Chainsmokers). Against this backdrop, there’s something appealing about the directness of pop punk: its loudness, its enthusiasm, its sneering snark of adolescence. Maybe the reason pop punk continues to connect is that it sounds less like celebratory wish fulfillment and more like the real experience of being a teenager.