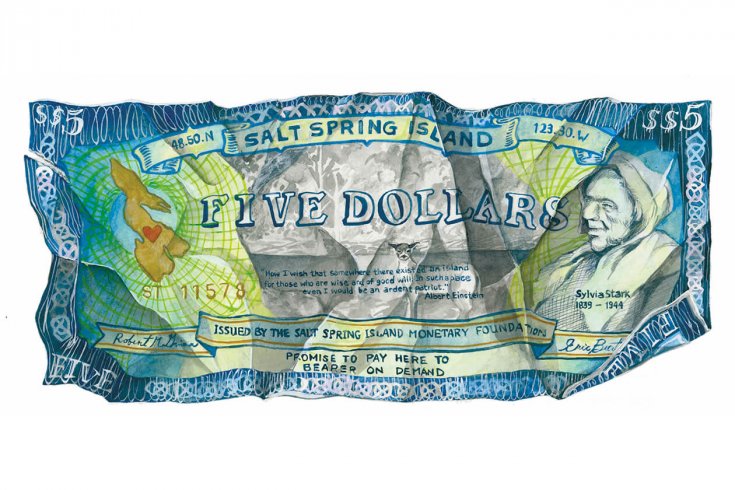 Salt spring island, British Columbia, is known for being green: it’s got sheep pastures, forested hills, and organic, vegan, and raw-food devotees; it helped elect Canada’s first Green Party member of parliament. It also mints its own money, which is one of the country’s longest-running community currencies.

Salt Spring Dollars were created in 2001 by dentist Bob McGinn and postal worker Eric Booth as part of a modest independence movement: the island isn’t its own municipality, and some residents thought designing a flag and launching a currency might add legitimacy to their claim. “The original idea behind the money was to get tourists to come, buy it, spend it, and take some of it off the island,” says Michael Gallant, the forty-three-year-old president of the Salt Spring Island Monetary Foundation (SSIMF), the non-profit issuer. Tourists and residents of the island, which is located between Vancouver Island and the mainland, insert their debit or credit cards into an ATM-like vending machine and withdraw stacks of colourful Salt Spring Dollars (referred to by the currency symbol $$).

More than $$150,000 is now circulating around the island—population 10,000—or stuffed in wallets around the world. The bills exist in tandem with Canadian dollars. They’re purchased at a one-to-one rate and are accepted by dozens of local businesses: grocery and hardware stores, tourist shops, and produce and craft vendors at the Saturday farmers’ market. The initiative divides islanders: some locals dutifully withdraw two or three hundred dollars every week, while most roll their eyes.

Most community currencies are well-intentioned pipe dreams that end up laid to rest under the acetate of a numismatist’s scrapbook.

Gallant took charge of the SSIMF in 2008, at the peak of the global financial crisis, and saw an opportunity to transform $$ from tourism gimmick into coveted alternative currency. The Canada Revenue Agency treats community currencies as forms of bartering, which means that any town can mint its own—and many have. There’s the Kawartha Loon in Peterborough, Ontario; the Calgary Dollar (once the Bow Chinook Hour); and the Community Way Dollar on Vancouver Island. But most go the way of the once-mighty Toronto Dollar and fade into obscurity after a few years—well-intentioned community pipe dreams that end up laid to rest under the acetate of a numismatist’s scrapbook.

Unlike other examples in Canada—most of which resemble Monopoly money—Salt Spring Dollars look and feel legitimate. They are printed locally on paper one grade below the pre-polymer Canadian bills, with the same dimensions and thickness. But instead of sporting patriotic images of the Canadarm2 or the Vimy Memorial, Salt Spring Dollars depict West Coast tableaux: a farmer bundles hay on the back of the one-dollar bill; a pod of orcas breaches on the five; eagles soar above forested mountains on the hundred. On the front of the bills are portraits of the island’s historical figures (women are on five of the seven denominations) and an Albert Einstein quote: “How I wish that somewhere there existed an island for those who are wise and of good will! In such a place even I would be an ardent patriot.” It turns out such a place does exist—and it’s an ideal site for a local monetary experiment.

Over the last century, the most successful community currencies arose as reactions to crippling economic conditions, particularly during the Great Depression, when people hoarded money and circulation rates plummeted. In Austria in 1932, during a period of especially high unemployment, the town of Wörgl introduced scrips—stamped paper money that depreciated in value over time—on top of the country’s Schilling. Townspeople were dispatched to repair roads, plant trees, and build bridges and then paid in scrips that they immediately used to pay back overdue taxes. Around the same time, hundreds of communities across the United States implemented similar systems. The only things backing them were the goods and services of each town, the incentive to spend them before they lost value, and the faith of the people who accepted them as real.

Most local currencies today, including $$, were created not as a reaction to scarcity, but as a means of attracting visitors and supporting organizations that serve the community. To encourage businesses to keep the money circulating, 5 percent of every $$1 exchanged back into CAD is donated to charity. (When a purchaser withdraws $$, they’re given a list of eight local non-profits to choose from.)

In an ideal scenario, the tourist buys the goat cheese, the local cheese maker buys basil from an island farmer, and the farmer buys groceries—all using Salt Spring Dollars. In reality, triple or quadruple exchanges are rare. While alternative currencies typically have a higher “velocity”—or circulation frequency—than national funds because people have no incentive to save, $$ don’t function according to the same logic. There’s no reason for people to spend $$ after buying them, so most bills aren’t in active circulation. More often they’re taken off-island as souvenirs.

Gallant’s long-term goal is to decouple his currency from the Canadian dollar entirely. No longer would users purchase $$ with CAD; the SSMIF would simply incorporate $$ into the economy. “Safely, in this community, we could put two or three million dollars of new money into circulation,” Gallant says. With more than five million in Salt Spring Dollars already printed and a chip-reading ATM in the works to distribute the money, he has everything in place, except for a full commitment from the island. “A lot of the merchants want people to shop local, but they themselves don’t want to buy local,” he says.

It’s an ambitious plan that might work, says University of Victoria economics professor Merwan Engineer, but it won’t be simple. A black or alternative market could develop to trade in $$ for CAD, unofficially setting an exchange rate that could be less than one-to-one. And if the SSIMF injects too much, their dollar would be devalued. On the other hand, Engineer notes, “If it’s accessible and more and more people use it, it’s possible Salt Spring Dollars will go through a phase of appreciation—in which case it would be a better store value than the Canadian dollar.”

Gallant remains cautious. “The risk is that when it becomes successful, it might attract the attention of the government or someone who wants to find a reason to shut it down,” he says. That’s what happened in Wörgl, where the National Bank of Austria terminated the scrip currency the year after it was established.

So for now it’s little more than a tourist draw. But, Gallant says, if one day the markets crash and consumers lose faith in the Canadian dollar, $$ will be there, ready to be taken seriously. “If people get jittery enough, the whole house of cards could come down,” he says. “Then community currencies are going to come into their own in a big way.”

Harley Rustad (@hmrustad) is a features editor at The Walrus and the author of Lost in the Valley of Death: A Story of Obsession and Danger in the Himalayas (2022) and Big Lonely Doug: The Story of One of Canada's Last Great Trees (2018).
Janice Wu