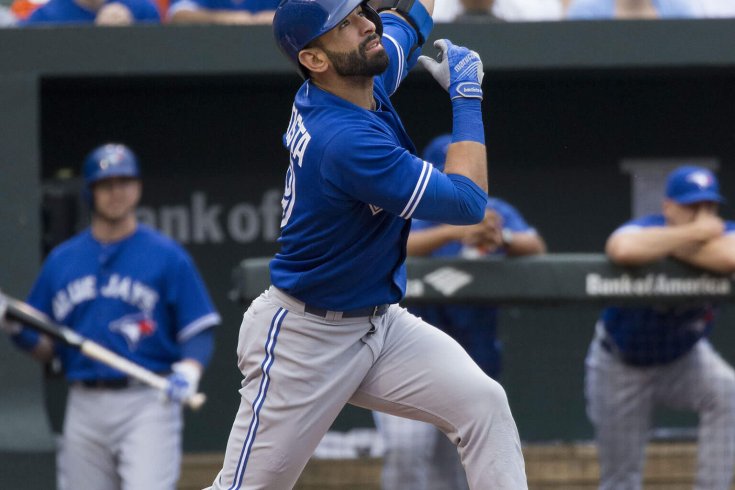 Wednesday afternoon, Toronto Blue Jays pitcher Marcos Estrada was masterful over seven innings against the Kansas City Royals. “What he does is the definition of pitching in my book,” teammate Josh Donaldson told Sportsnet post game—a 7–1 Jays victory in game five of the American League Championship Series—highlighting how the pitcher has been the team’s unsung hero throughout the season. The game, and Estrada’s performance, was a salve on the burn of Tuesday’s blowout—a near-comical affair that had the Jays giving up fourteen runs to disastrously lose game four. The team brushed that off and came back swinging, giving its fans exactly the game (and the chapter in this long, anxious story) we needed.

The playoffs have afforded plenty of room to build narratives around this team. There have been some beautiful, heart-warming high points, like the triumphant return of long-injured pitcher Marcus Stroman, and his proud, weeping father watching him from the stands. There have also been some embarrassing low points, like a bizarrely generated “conflict” between pitchers R. A. Dickey and David Price. (It didn’t exist.) With lots of column inches to fill and a growing public hunger for stories, it becomes hard to keep up with all the mini-dramas that are being documented, and at times, largely manufactured.

One of the most oddly and repeatedly examined narrative subjects of the playoffs has been that of José Bautista’s controversial personality. Baseball media has done an excellent job perpetuating a “Bautista as villain” tale, and non-Jays fans have lapped it up in the interest of justifying Toronto’s elimination. They’ve snatched and disseminated quotes from opposing players and managers that highlight Bautista’s arrogance, his vanity, and his “disrespect for the game.” While the entire city of Toronto rejoiced over Bautista’s aggressively flipped bat in an explosive game five of the ALDS, a debate erupted around whether or not his behavior was appropriate.

“I told (Edwin Encarnacion) José needs to calm that down, just kind of respect the game a little more,” said pitcher Sam Dyson of the eliminated Texas Rangers. “He’s a huge role model for the younger generation that’s coming up playing this game, and I mean he’s doing stuff that kids do in Wiffle ball games and backyard baseball. It shouldn’t be done.” Rangers pitcher Derek Holland added his disdain to the chorus of Bad Bautista earlier this week, saying, “I mean, personally, I don’t like him, either.”

The number of pieces asking the question “Was the bat flip acceptable? ” is astounding. Many ignored the cultural (and racist) implications of the discussion, given that bat flipping is commonplace in the Dominican Republic—where Bautista was born, and the birthplace of eighty-three players on Opening Day, 2015—and yet it’s regarded with disdain within the white American baseball establishment. Further, because Toronto lacks an obvious evil-doer, it became necessary to pick on Bautista’s legendary pride and self-love in the interest of engineering drama and demonizing the team: He’s full of himself; he “mouths off” to the media; he’s “explosive” and “inappropriate”; he stares down misbehaving fans and denies them free baseballs; he thinks he’s “better than the game.” Somehow Bautista morphed into a big bad bully on the playground that is baseball, and according to many he needs to be taken down a peg.  (It’s pretty clear what the baseball establishment means when it makes that nefarious suggestion.)

Thing is, there’s absolutely nothing wrong with the way José Bautista acts. If you strip away the incessant buzz and convenient sound bites, the whining about hallowed unwritten rules and “respecting the game,” you’ll actually realize that he’s not only the sports hero Toronto desperately needs, he’s the hero Major League Baseball desperately needs. I could make this argument by saying Bautista is a good, hardworking, successful guy, because there’s certainly a huge amount of stereotypical evidence to support that idea. The all-star has over a decade of major league experience at six different positions, is a three-time Silver Slugger, and has taken home the Hank Aaron Award. He’s also a married father of three, and a successful, well-dressed business entrepreneur who founded the Bautista Family Education Fund, an organization that sponsors aspiring baseball players’ post-secondary education costs.

But while it’s clear that Bautista is a talented player who does good work both on the field and off, I’d actually argue that it’s the less “likeable” aspects of his behaviour that truly secure his hero status. He doesn’t suffer fools, and refuses to toe the organizational party line despite unsolicited advice to the contrary. He’s openly criticized the media for their racism, won’t bow to their incessant expectations of the way he should speak or act, nor buy into any of their ridiculous quote-twisting assertions. In August he actually boycotted one-on-one Sportsnet interviews because he believed they took advantage of rookie and friend Devon Travis by refusing to reimburse him for a suit he purchased during a segment. (No small gesture on his part, given Sportsnet is owned by Rogers, and Rogers owns the Blue Jays.) This week, he took to Twitter to blast the media’s suggestion that he had thrown teammate Ryan Goins under the bus regarding a missed pop fly. “I challenge ANYONE to play the full tape of my post-game interview and then make your own conclusions. Nice try,” he tweeted.

Bautista’s so-called diva-esque self-importance is talked about as a bad example for kids watching and playing the game. I question why we want to teach young people—especially those who are marginalized—not to be openly proud of their accomplishments. We suggest to them that praising a success is a flaw, and that believing in themselves is an embarrassing secret to be hidden away. Bautista’s on-field presence, the way he conducts himself in media scrums, even the way he tweets (@joeybats19), all suggest a secure self-reliance that I’m happy to see inspire the wrongly insecure. He’s chided for admiring his achievements, but really, why shouldn’t he (and all of us) celebrate them? And if the game and its mired traditions are notorious for being violent, racist, sexist, and homophobic, why should he respect it at all?

Reimagining this “disrespectful” and “arrogant” Bautista caricature as firmly on the side of good is an excellent exercise. He’s confident, loyal, defends and supports his teammates, and patently refuses to let anyone speak for him. He won’t put up with anyone’s shit and doesn’t believe anyone else should either. He asserts his humanity in a gossipy media landscape that seeks to rob him of it. And while his opponents and detractors are shrieking “what about the children,” he’s actively inviting them to the clubhouse to snap selfies with him, before riding home from the game on his team scooter.

“I wear my emotions on my sleeve,” said José when asked about that now-scandalous (but totally justified) bat flip. “I think that’s what gives me my drive—that’s what keeps me going and allows me to be successful. I have to play like that—if I don’t, then I might not be me.”

A huge number of us simply aren’t arrogant enough about our own successes. We don’t stick up for ourselves, the things, and the people we care about out of fear. We could benefit from following Bautista’s blazing lead. Our heroes don’t always have to be nice to everyone, especially not to those who deliberately misinterpret or insult them, nor do they need to fall in line with a system that seeks to muzzle them. Bautista knows he’s good because he is. He isn’t afraid to be authentic, and won’t let anyone tell him to shut up, sit down, and take it. I can’t imagine a better message being delivered to young fans, nor a better kind of baseball hero for them to look up to.