Men Will Be Boys | The Walrus
Skip to content 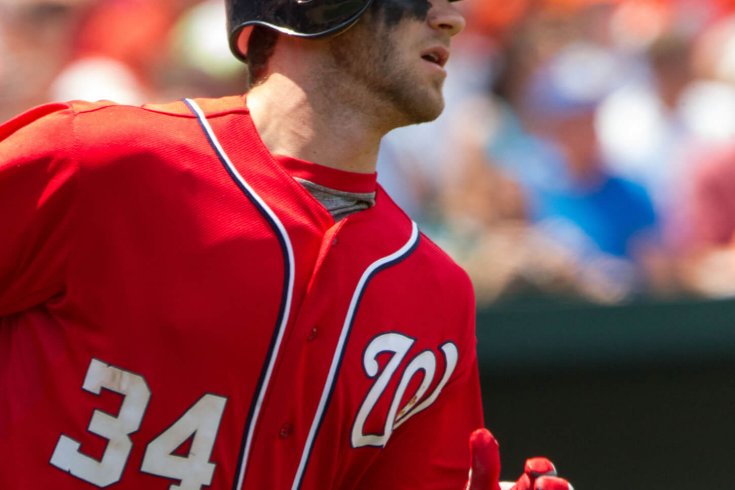 Bryce Harper of the Washington Nationals.

On Sunday afternoon, while the newly playoff-bound Toronto Blue Jays were engaging in the lovely team-bonding ritual of soaking Josh Donaldson in sports beverages, the Washington Nationals had some serious explaining to do.

In the bottom of the eighth inning of the Nationals’ final game of a series against the Philadelphia Phillies, thirty-four-year-old closing pitcher Jonathan Papelbon lunged at and choked twenty-two-year-old teammate Bryce Harper. According to reports—and nationally televised video of the incident—Harper had been too slow to run out of the batter’s box on a pop fly. Papelbon took issue. When Harper returned to the dugout they had a brief, heated exchange, after which Papelbon put his hands on Harper’s throat and shoved him against a wall before teammates intervened. The pitcher has been suspended for four games as a result.

The game was Washington’s first since being mathematically eliminated from a playoff spot, a crushing blow for a team that had once been an October favourite. To add more fuel to the dysfunctional fire, last week Papelbon hit the Baltimore Orioles’ Manny Machado with a pitch for what has been assumed to be revenge for a Machado home run a few innings earlier. Apparently one of Harper’s major sins was that he spoke to the media about that incident, saying, “Manny hit a home run, somebody drilled him. It’s pretty tired . . . I’ll probably get drilled tomorrow.” Papelbon was suspended for that attack too, bringing his total games out to seven (meaning he’ll be gone for the rest of the season).

For some, this may seem like an excruciatingly boring baseball soap opera—just boys being boys, already in the past because Major League Baseball made the right call in punishing Papelbon. But various public reactions to the incident have revealed how broken baseball culture really is, with archaic player attitudes, irresponsible media coverage, and an inherent toxic masculinity that should be more broadly addressed. In the immediate aftermath of the event the two players were painted as polarizing caricatures: Papelbon the veteran, macho jock; Harper the young, pretty, feminized brat. It’s also worth noting Harper has long been the target of this kind of antiquated derision, with jokes about how long it takes him to do his hair (thirty minutes, as he’s proudly told the media,) and a general feeling that his vanity, cockiness, and laziness denote he should be put in his place.

Let’s be absolutely clear. Putting someone in their place in the context of baseball’s old boy’s club means cruelty. It means shaming and humiliation. It means stripping someone of their confidence to encourage forced, fear-based respect. It means gagging and taping a rookie to a pole in the dugout, presumably because he’s too mouthy. These are tactics implicitly endorsed by sports media every time it gleefully covers rookie hazing as “all in good fun,” or suggests that baseball is in a world beyond the rules of human decency.

For example, the New York Post’s response to Sunday’s incident was to run a headline stating that Harper (not Papelbon) is controversial, and ask if he’s worth the drama. Veteran Blue Jays pitcher LaTroy Hawkins (who, incidentally, is responsible for the team’s latest round of rookie hazing) took to Twitter to side with Papelbon, suggesting those who haven’t played the game can never understand what happened between the warring teammates. Fox Sports ran a piece by sportswriter, radio personality, and former player C. J. Nitkowski, in which surveyed major leaguers overwhelmingly support Papelbon’s actions. The overall takeaway is that insolent players should get a public beating—though one (horrifyingly) suggested it might be better done “behind closed doors.”

In that Fox Sports piece, Nitkowski made clear that he believes Harper was in the wrong for speaking out about the Machado incident, and for not working hard enough overall. “Papelbon is everybody’s favorite punching bag but it’s not deserved here,” he wrote. “This is a game that governs itself; it always has and always will. No one is above giving his full effort every time. When you don’t, there will be a veteran teammate there waiting to remind you. Sometimes that might result in a fight and that’s OK. This is not your office.” On Twitter, he redefined assault, writing, “Two dudes yell at each other and get in a fight, it’s not assault”; and, “It might be assault at your office. Not in this world. Apples and oranges.”

Nats manager Matt Williams further brushed off the issue by saying, “Certainly there’s a lot of testosterone flowing among young men competing. What I can tell you is this: This is a family issue and we’ll deal with it that way.” I can’t think of a more obviously troubling metaphor to use when speaking about the best way to deal with violence. As much as the baseball status quo would like to imagine it away, Papelbon literally did something illegal on Sunday, his actions certainly falling within any law book’s definition of assault. Okay, I may never have played pro baseball and this is not my office, but like any reasonable human being I know that the dugout is certainly not above ethics, civility, and the law.

Perhaps most relevant to Canadian baseball fans is Sportsnet’s decision yesterday to run a three-minute segment effectively endorsing the attack. High-profile Blue Jays Central analyst and retired catcher Gregg Zaun (who has been a fierce proponent of violent hazing in the past) made it clear that he loved what Papelbon did to Harper, and that Harper had simply asked for it.

“This guy has issues. He thinks he’s better than everybody else,” Zaun said of the MVP hopeful. “I can’t believe he would even step up to a veteran player like this and mouth off and try to defend that crummy effort he put forth.”

Throughout the segment, Zaun was absurdly preoccupied with the fact that Harper hadn’t run fast enough on a routine pop fly, that the young player deserved what he got because this was not the first time he’d been singled out for “not hustling.” (In fact, Zaun barely mentioned Sunday’s assault at all.) Apparently being attacked in public was Harper’s price to pay for his prior behaviour: “This kid should have been disciplined a long time ago. More so than just being taken out of a ball game.”

There’s an obvious cycle happening here. So many prominent sports media figures were once players themselves, and via their on-air presence continue to support the idea that the clubhouse is somehow beyond any standard workplace conduct. Zaun, for example, was severely bullied as rookie, and now shamelessly endorses the same egregious behavior from current players. What makes it all the worse is that he is doing so on a prominent mainstream platform, with the full backing of a network that has a monopoly on Canadian baseball broadcasting. (Rogers owns Sportsnet, the Blue Jays, and the naming rights to the team’s nest.)

Not to get all “What about the children? ” on this, but the message being sent to players and fans alike is that violence is a valid form of dispute resolution—a wholly irresponsible dictum that has real world repercussions. People who are taught to believe they can solve discord with force and abuse very often let that kind of behaviour bleed into all areas of their lives, with dire results for those around them.

I don’t know what Harper said to Papelbon in the dugout, and frankly I don’t care. If the mainstream media is so willing to spin that Harper was “asking for it” when there’s video clearly showing he was attacked, the rest of us are decidedly doomed. During Zaun’s endorsement of rookie hazing earlier this year, he was quoted as saying, “You have to allow your veteran players to create the atmosphere that they want in the clubhouse because at the end of the day when guys get along, and they know their pecking order, and they know their hierarchy, everything seems to work out just fine.”

My version of fine does not include one player choking another. No one’s ever should. By not addressing and indicting the kind of toxic culture that this media messaging breeds, we’re ensuring not only more incidents like the one that happened on Sunday, but further consequences far outside the clubhouse walls.

By the way; that bratty, vain upstart who needs to be taught a lesson? Harper is focused on moving forward and putting the attack behind him, though in my view he’s certainly under no obligation to do so. “If Pap is gonna help us win a World Series next year, that’s what I need,” Harper told reporters Monday. “That’s what the whole clubhouse needs.”

What the clubhouse—and baseball—doesn’t need is institutionally condoned violence and media complicity. You can say “boys will be boys” all you like, adhering to the delusion that being a player somehow makes you exempt from the rules, but fans are within our right to no longer stand for it.