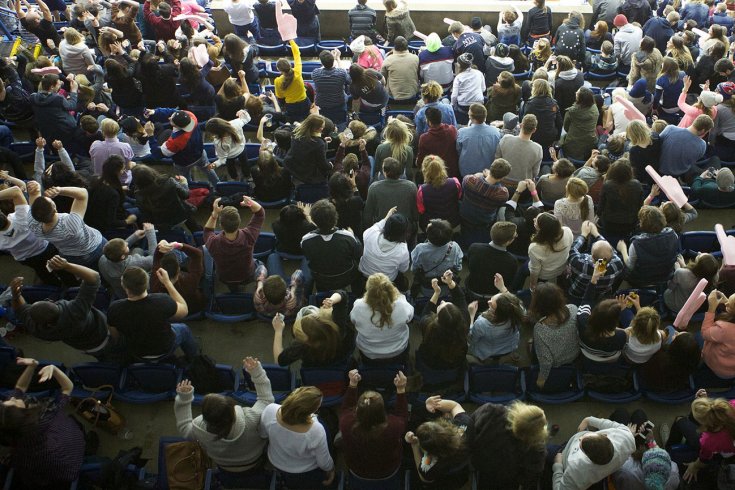 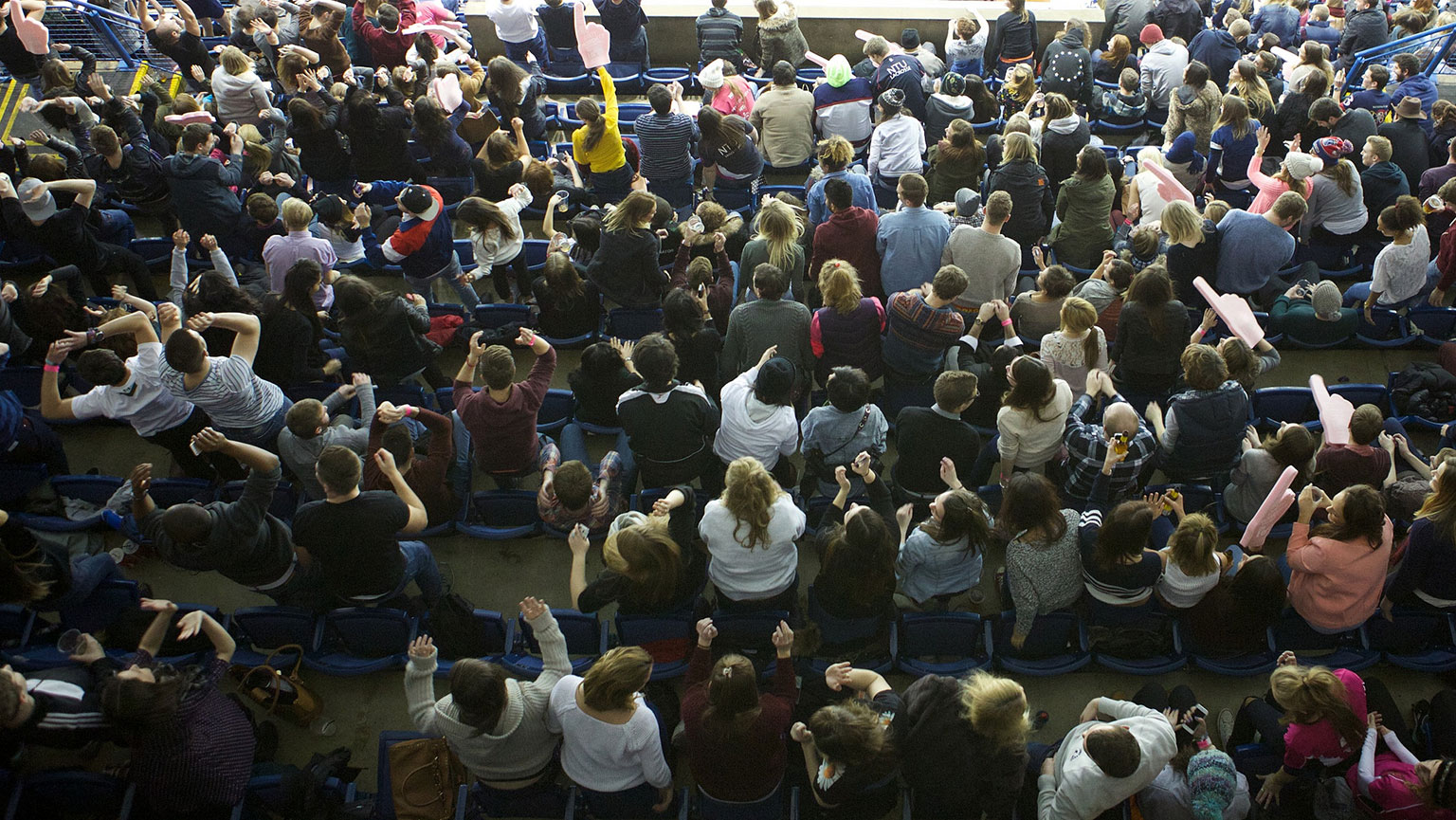 In 1981, I was in the finals of my city’s twelve-and-under tennis tournament. I walked alone across the park to the local courts, meeting my partner, who arrived by bike, on court two. We played our match with only the bored, teenage court minder as audience, and then after I walked home. At dinner my mother asked about the match: I gave her a brief summary of my victory, she praised my achievement, and that was that.

I now have two daughters of my own. When my eldest joined an inter-city hockey team, my husband and I found ourselves with fifty other parents at the local arena, scrutinizing every, pass, shot, and dangle with rapt attention. Plays were critiqued for level of effort, aggression, skill, and, of course, the referee’s favour for the other team. By the time I tucked my daughter into bed, she and I had analyzed her plays in excruciating detail and agreed on a general assessment of her performance. Oh ya, and did she have fun?

My daughter’s home arena, in one of Quebec’s well-established English enclaves, is dotted with plaques engraved with the names of wealthy benefactors. The team’s parents are not the most intense bunch—certainly not compared to those in other parts of the province. We are well versed in the Olympic rhetoric of respect, fair play, and love of the game, and we tend to bristle when rough language and behaviour are displayed by parents who accompany visiting teams.

But even among parents who stand around before games talking about their cottages and boats, the pretense of civility often drops abruptly when games get heated. There’s the kid who “needs to stop trying to stick handle and just send the puck to [insert name of a different kid who scores a lot]!”; the fourteen-year-old ref who needs to “get his fucking head out of his ass!”; the eight-year-old goalie who needs to “stop being such a pussy on his blocker side!”; and also the kid who just got accidentally tripped, and needs to go back and “take that motherfucker down!” The father of the modern Olympics, Pierre de Coubertin, would be proud.

The older and more competitive kids get, the worse their parents’ behaviour. While waiting for a Quebec-wide tournament to start, a boy on the opposing team told my nine-year-old daughter to “get a condom and go fuck herself.” As he offered this confusing piece of advice, I saw his mother nod her head in approval. She then threw our hockey bag at my daughter’s teammate because it had encroached beyond the masking-tape line that designated their assigned corral. Many parent-child fist bumps ensued.

These actions often take place under posters and banners reminding everyone that hockey is “Just a Game,” that we should “Respect in Sport,” and that the “Furniture Is Bolted to the Floor.” It’s no wonder officials (the vast majority having wiped a parent’s spittle out of his or her eye at least once) don’t seem to last long—the meagre pay not being worth the abuse.

Last year, I sat beside a particularly involved parent at one of my daughter’s league games. The father was filming each shift of his seven-year-old son, while spewing his own obscene commentary about the level of suckiness his son was demonstrating. Off camera, the man’s older son was also screaming profanities, regularly interjecting the younger boy’s name and number—presumably to ensure his brother didn’t get confused. It became so outrageous that other parents told the father to put away the camera or close his mouth. I’m sure that video will be submitted as exhibit A in a courtroom one day.

Meanwhile, studies suggest kids are motivated to play team sports for fun and friendship. Competition is way down the list, with most kids dropping out by age sixteen. The message kids are receiving from parents is mixed, at best.  We put our kids in hockey so they can have fun, socialize, stay fit, and learn a few skills. But instead of encouraging autonomy and experimentation—the hallmarks of play—modern parents direct and constrict players’ experiences, emphasizing performance at all costs. Imagine harassing your child as he tries to master monkey bars, rainbow loom or Donkey Kong. Or worse, imagine someone yelling at you to stop embarrassing yourself every time you play a recreational round of golf.

Hockey is expensive—both in money and time—and many parents look for a return on investment to justify the over-spending and over-involvement in their kids’ recreation. But rising costs are changing the socio-economic base. Families are now expected to register kids in spring hockey, summer camps, power-skating sessions, and stickhandling clinics—spending as much annually as private school tuition. Class tensions within and between teams in minor hockey add fuel to the fire. It’s not uncommon for affluent families to exploit league regulation loopholes and send their talented kids to play in lower-income areas where it is believed that kids are scrappier, tougher, and more driven.

Hockey is a high-speed, contact sport—despite youth-league rules prohibiting checking—that incubates aggression toward players and officials. Spectators feed off the hostile tension whether at Montreal’s Bell Centre or the local rink. When stakes get high, kids stop rotating positions or playing equal shifts. They are drilled and criticized and encouraged to compete with each other for ice time, starting lineups, and spots in better leagues. The system streams kids up or out, and parents are often more anxious than their kids about being left behind. No parent wants to spend years bragging about their kid’s talent, and then watch them play their teenage years in recreational house leagues.

While my daughter is almost always the only girl on her co-ed teams, I believe she is, in fact, the luckiest. While we often bemoan the fact that girls don’t have NHL fame and fortune to aspire to, I see it as a blessing. For now, she plays her own game free of the pressures and distractions of her male peers. Sure, she wants to be captain of Team Canada one day, but she’s not being asked to skate over her teammates’ bodies on the way up.

Last year, my eldest daughter had the good fortune of playing on a losing team. They lost so often and so badly, the mercy rule was exercised to exhaustion. And there was rarely a mean word spoken by the opposing teams’ parents, who were too busy enjoying complete domination. Maybe they even felt a little bad. Our team’s parents were forced to find something other than the score to focus on, so we cheered anything that could be cheered: a dropped stick picked up, a pass completed, an offside avoided. Parents left kids to laugh and relax after games in the locker room, because screaming, “Why weren’t you first on the puck? ” after a 10–0 loss just seemed weird. Unfortunately, this year her team is winning, which may be why she is getting helpful advice from boys about condoms and what to do with them.

My second daughter just started hockey. She has chosen to play in a girls’ recreational league instead of trying out for a co-ed, inter-city team. I’m relieved. At her games, I sit with other parents with Kobos and iPads on our laps. We sometimes give a thumbs-up and smile, but mostly our kids play—in its truest form—and never look our way. My daughter tries to move the puck up the ice when she feels like it; there are times when she just stands in front of her net like a royal guard protecting the palace. She plays hard some days and casually on others. And she sometimes misses the action because she’s chatting with her opponent. She plays for herself, and doesn’t care what I think of her spin-o-rama goal.

For the record, it truly was a thing of beauty. Too bad it was on the wrong net.