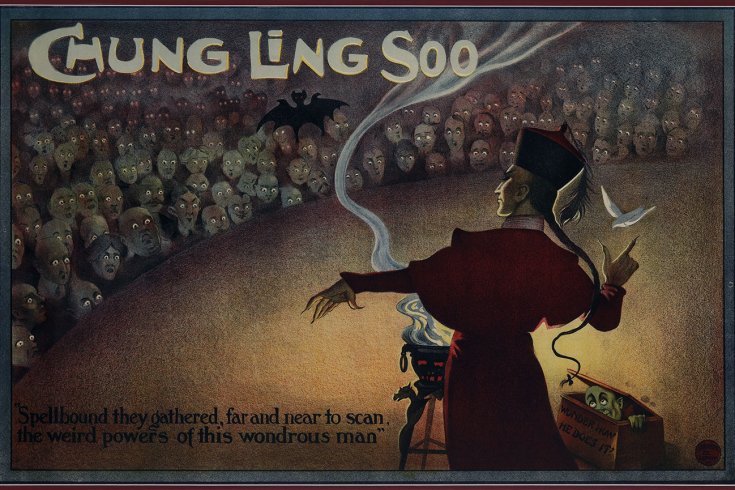 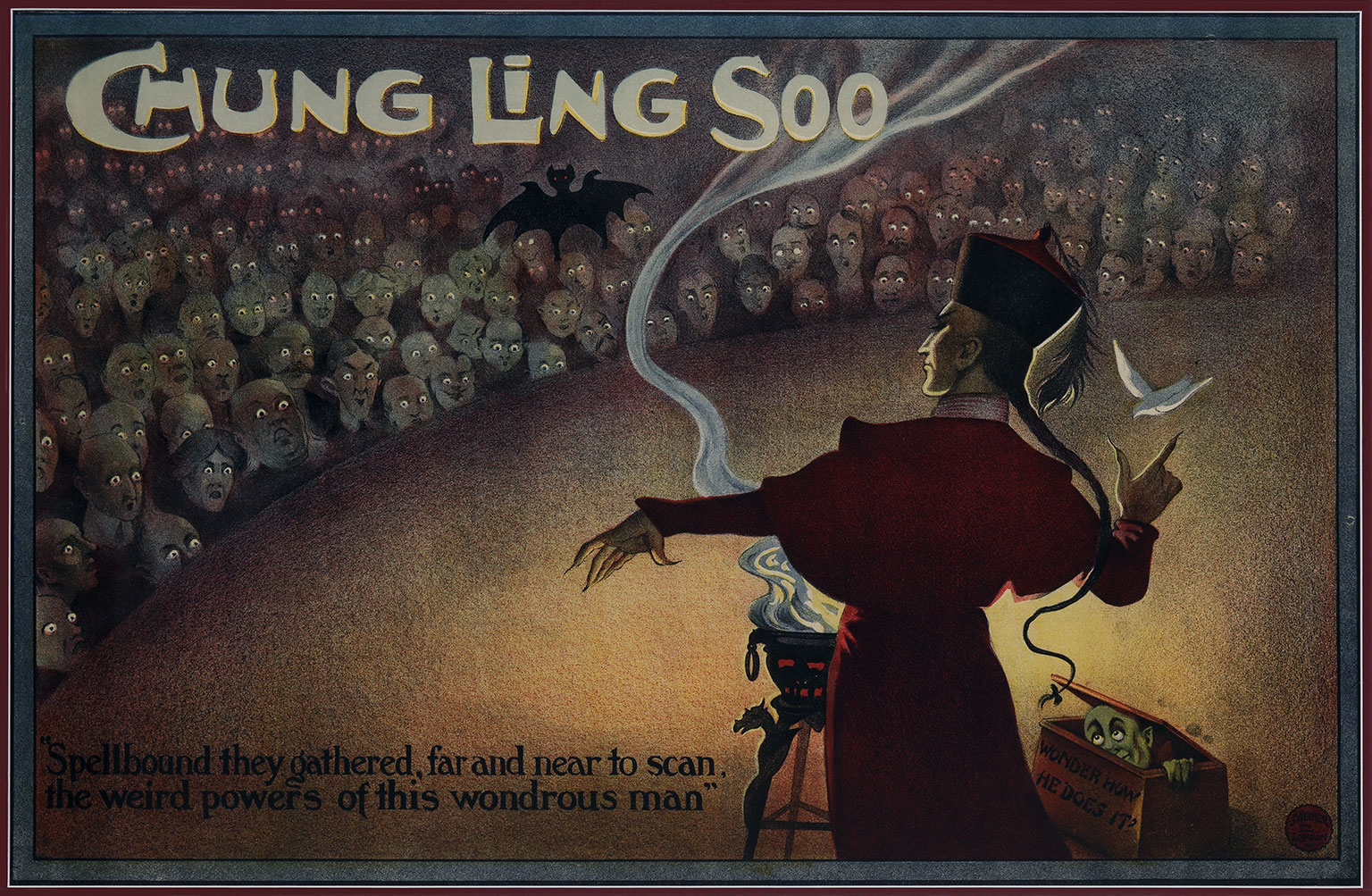 “The Wonder Show of the Universe,” “The Greatest Necromancer of the Age—Perhaps of All Times,” “Sensational Mystery.” The breathless claims made on the magic posters of the late 1800s and early 1900s were lurid and bold. Yet at the time they were printed, many people truly did believe them to be true: it was the golden age of stage magic. The craft’s popularity during this era—and the degree to which its most popular practitioners were mythologized—will never be duplicated.

It was, of course, a tumultuous era; there was the First World War, the Roaring Twenties, and the Great Depression. Art went abstract, women wanted the vote, and the air itself suddenly was abuzz with flying machines. It was a tricky time, ripe for tricky entertainers.

A French magician, Jean Eugène Robert-Houdin (1805–71), set the stage for many others. Carl Waldman, Joe Layden, and Jamy Ian Swiss, who collaborated on a 1997 history of theatrical illusion, have dubbed Robert-Houdin the “father of modern magic.” Before him, many conjuring performers looked as if they were straight out of the Middle Ages, dressed in long robes and conical hats. After Robert-Houdin, it was all top hats and tails. Magic now looked classy.

Years later, a young Hungarian-American named Ehrich Weisz (1874–1926) would adopt the name Houdini in honour of Robert-Houdin. But he had other sources of inspiration, too. And that brings us to perhaps the strangest aspect of the magic craft of those days: its paranormal overtones.

In 1848, a group of perversely mischievous siblings, the Fox sisters, started faking ghostly phenomena at their home in Hydesville, New York. This silliness fed the craze of spiritualism, defined broadly as a belief that ghosts send messages to the living. Seances became common. Historian Ruth Brandon tells of one attended by the writers Charles Dickens, Bulwer Lytton, and Wilkie Collins—as well as by Robert-Houdin himself. The magician is said to have made the presiding medium look like a fool, but Lytton nevertheless came away convinced that he had seen flickers of another world.

Lytton was not alone. Such eminent British scientists as Sir William Crookes (1832–1919), Sir Oliver Lodge (1851–1940), and Charles Richet (1850–1935) all fell for mountebanks posing as clairvoyants. John Nevil Maskelyne (1839–1917), the founder of a dynasty of British magicians and a vigorous opponent of humbug, once commented that “no class of men can be so readily deceived by simple trickery as scientists.”

Some magicians encouraged the occultist wave. By the 1850s, the brothers Ira and William Davenport (1839–1911 and 1841–77) were exploiting spiritualism through an act that featured purportedly genuine poltergeist activity. Jim Steinmeyer, a chronicler of stage magic, has reported that the brothers sometimes got spectators so agitated that violence erupted.

Thanks to the Davenports, stage magic became entangled with spiritualism, which forced people within the craft to choose sides. Robert-Houdin accused the brothers of being mere sleight-of-hand operators, while Maskelyne went so far as to denounce them as frauds at one of their performances. Nevertheless, the Davenports remained influential, and biographer Kenneth Silverman has noted that Houdini was one of their biggest fans, despite his own growing hostility toward charlatans. (In 1910, he even got an aged Ira to reveal a signature trick the brothers performed.)

Even without spiritualism, turn-of-the-century stage magic was a pretty rum affair, one that perhaps reflected the uncertainties of the era. According to Silverman, one top American performer, Howard Thurston (1869–1936), had a criminal background as a pickpocket, burglar, and con man. Moreover, as Steinmeyer discovered, Thurston used a particularly nasty technique during a levitation trick: he would call a spectator (usually a boy) up to the stage to act as a witness and, at the crucial moment, distract him by quietly cursing in his ear. (Thurston also championed spiritualism.)

Another oddball was William Robinson (1861–1918), a New Yorker who was the subject of a biography by Steinmeyer. Inspired by a Chinese magician who went by the stage name of Ching Ling Foo, Robinson reinvented himself as the prestidigitator Chung Ling Soo. (Ching Ling Foo reportedly resented him greatly for nicking his name.) Robinson kept up the charade until he perished during a remarkably dangerous stunt involving gunplay.

Next, there was P. T. Selbit (1879–1938), whose kinky routines involved tormenting women. He pretended to subject his several female assistants to such cruel fates as crushing and stretching, but he’s best remembered as the first person to saw a woman in half (in 1921). Some have speculated that this was a symbolic gesture against the suffrage movement.

The British illusionist Charles Morritt (1860–1936) was so obsessed with mirrors that he slept with several under his pillow in case he awoke in the middle of the night with a new idea that immediately needed testing. Silverman explains that one of Morritt’s schemes was to make an elephant disappear—an allusion so astounding that Houdini bought the international rights for it and mounted it himself in 1918.

Thanks to the above artists (and their many less notable contemporaries), stage magic spread across Western society as a hobby and form of mass entertainment. Magic shops—notably Martinka & Co., founded in New York in 1872—popped up around the world. Pulp magazines became vehicles for magical self-promotion. (Howard Thurston apparently ran his own.) The celebrated magazine Weird Tales printed fictional accounts of the adventures of Houdini; one of these yarns was ghostwritten by the horror author H. P. Lovecraft. The titular character in L. Frank Baum’s 1900 fantasy novel The Wonderful Wizard of Oz might have been inspired by Harry Kellar (1849–1922), who started out as a protege of the Davenport brothers, went on to mentor Thurston, and ended up acting as a kind of father figure to Houdini.

And then, poof, the moment was gone. Stage magic survived the tragic death of Houdini, in 1926, but in the era of radio and later television, no subsequent illusionist would ever equal his fame. Today, we can admire posters and other artifacts from that time, but the puzzle of what made it all so special is a trick that no modern conjurer can master.

Quebec Rewrites Its History in One Book 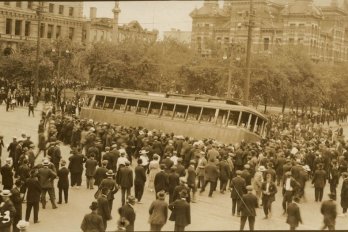 What the Winnipeg General Strike Can Teach Us About Class, Capitalism, and Greed