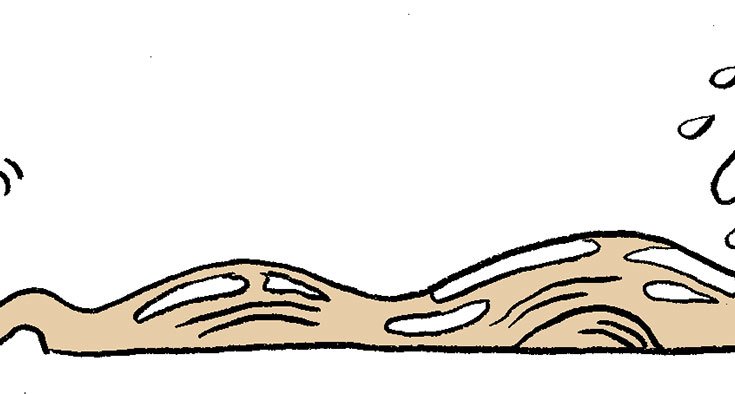 The main room of Edmonton’s quality-assurance lab, which tests soil, concrete, cement, and asphalt for the city, resembles an industrial kitchen, with ovens lining the walls and a cluster of gleaming steel countertops in the centre. Throughout the day, engineers and technologists, some wearing bright orange coveralls, dart in and out, carrying samples from roads all around town. Some samples are so fresh they’re still warm to the touch.

Edmonton has had its own asphalt lab for more than fifty years. In that time, it has cycled through five different addresses; today, it lives in a crisp new building in an otherwise unassuming industrial corner of the city. It’s the only municipally funded lab of its kind in the country, which makes sense, given the bumpy state of Edmonton’s roads: the city repairs a mind-boggling 450,000 potholes every year, at a cost of $4.8 million in 2014 alone. To put that in perspective, Toronto fixes fewer than half as many potholes a year, and Montreal and Calgary about a tenth. In Edmonton, potholes are a perennial election issue, as well as frequently invoked shorthand for the perceived failings of local government (“If they can’t even fix the potholes, how can they . . .”). The lab, which develops new asphalt mixes and tests them once they’re put to use on city streets, has arisen out of political necessity.

“It’s an interesting battle,” says Hugh Donovan, the diplomatic fifty-nine-year-old engineer who has run the facility for nearly fifteen years. Known by his colleagues as “our asphalt nerd,” Donovan has an unusual passion for road materials, which allows him to thrive in his high-stress position. His job is to make sure the roads don’t fall apart—and many of Edmonton’s are doing just that.

There are a few big reasons why the roads are in such poor shape. One is extreme temperatures. With peaks of thirty-five degrees in the summer and lows of forty degrees below zero in the winter, Edmonton’s weather demands that asphalt withstand a temperature range that can exceed the material’s engineering limits. Another problem is the underlying soil, which comes in myriad forms, each with its own headaches. “We have bedrock outcroppings, we have silts, we have sands, we have clays, we have peat bogs,” Donovan says. “We have every soil imaginable, and we’re responsible for all of it.” Edmonton’s latitude means that during the long summer days high radiation from the sun oxidizes the asphalt, which can cause cracking; as a result of climate change, it also faces shorter, more frequent freeze-thaw cycles. Asphalt is still the best material for the job, but no single mix can handle all these variables. It’s up to Donovan and his thirty-odd employees to tinker with a range of them until, collectively, the different mixes cover as much ground as possible.

Even though it is synonymous with the modern city, asphalt has an old soul. The naturally occurring form is a sticky, tar-like substance; the road material that goes by the same name is distilled from crude oil and combined with aggregates such as gravel and sand. The Babylonians first encountered natural asphalt circa 625 and put it to use on roads. The Egyptians sometimes employed it to mummify the dead. It would be many centuries before paved roads really took off, but when they did there was no turning back. In 2013, Canada alone produced 35 million metric tons of the material.

According to Donovan, creating even one successful mix is harder than it sounds. Asphalt must be malleable enough to expand and contract naturally according to the outdoor temperature. It must be strong enough to bear constant strain from vehicles moving at high speeds, without cracking or rutting. (The lab has a machine that can simulate fifteen years’ worth of traffic in a matter of minutes.) Roads must also be compact enough to repel water; trapped droplets, which expand when they freeze, are one of the main reasons asphalt falls apart, eventually leading to potholes. While Donovan is talking, he peeks into a room where another machine is forging puck-shaped samples with a hammer. It does this seventy-five times in a row.

Much of what happens in the lab is invisible to the general driving public, but Edmontonians are all too familiar with what can go wrong when this kind of quality assurance is pushed to the margins. Most of Donovan’s work these days involves what he calls “triage”: trying to repair the literal and metaphorical damage done by years of slashed maintenance budgets during the debt-phobic ’90s. Things have improved recently, thanks to bigger budgets and higher standards for what gets poured in the first place, but anyone searching for a quick fix is bound to be disappointed.

We take asphalt for granted, and road repair belongs to the slow, unsexy world of routine maintenance. It can take years before the average driver will appreciate the investment. Donovan doesn’t seem to mind. “If I don’t like my job,” he says, as 300-degree air pours out of an open oven, “I’ve got only one person to complain to.”

Michael Hingston (@mhingston) has written for Wired, the Guardian, and The Walrus. He edits the Short-Story Advent Calendar.
Walter Scott