And the Band Plays On | The Walrus
Skip to content 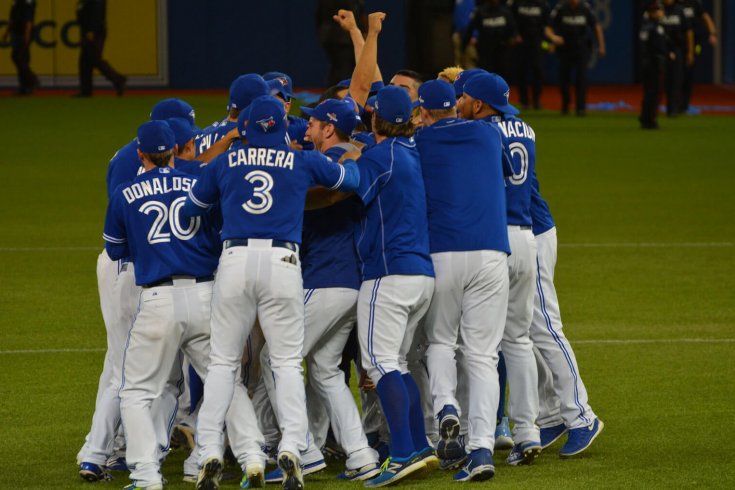 The game of baseball is usually made up of long pauses punctuated by tiny miracles. It’s often ridiculed for the clock-less way it drags on toward infinity, a team sport that actually reads more like an anthology of solo victories. A pitcher on fire, serious and stoic while counting up his Ks. A centrefielder with a miraculous home run–stealing catch. And of course a storied slugger, hurling that tiny white ball over a wall 400 feet away. Each action is made by a single man; most actions are decidedly less emotionally and physically aggressive than those of other professional athletes.

But the “win or go home” game five of the American League Division Series matchup between the Toronto Blue Jays and the Texas Rangers felt like a decidedly different situation. It was the kind of game that turns non-believers of the collectively induced magic of baseball into teary-eyed converts. It was the kind of game that we’ll tell our bored children and grandchildren about years from now, a well-worn badge of pride if we’re able to say we were there.

That already historic fifty-three-minute seventh inning, long enough that you could have watched an entire episode of prime time dramatic television during it, felt like it had a momentum driven entirely by the teams and the fans’ shared feelings. Disappointment, frustration, misery, rage, and then finally an elation like no other in sports. It was an Italian opera. A Shakespearean play. A truly ensemble effort. Many a seasoned baseball writer has said today they have seen no game like it, and likely never will again. This is exactly the game you refer to when people say that baseball is boring, so thoroughly does it turn their claim to lie.

I was at yesterday’s game, carefully dressed in the exact same clothes I wore during the final home game of the regular season, a t-shirt and cap made lucky because Josh Donaldson hit a walk-off home run, was promptly stripped of his jersey, and then ceremonially soaked in Gatorade. I’ll admit here that I haven’t been handling the playoffs well. At the beginning of this ALDS, I suffered through the Jays’ devastating game one and two losses—the stress, and the stress hangovers from each making me a basket case, more apt to cry over baseball feelings than usual.

The Jays had wormed their way into game three and four wins, but by yesterday, with the team back at home for the final contest, my faith was considerably shaken. I’m ashamed to admit there was a small part of me that had already resigned myself to loss—a thing we’ve been trained to do for decades as Toronto sports fans. (We can’t be blamed for our defense mechanisms.) Naturally, the do-or-die nature of game five was an inevitable torture chamber for the sports sensitive, and I found myself putting my head between my knees and practicing deep breathing to make it through. Hilarious, given I often say a visit to the ballpark is a great way to relieve stress.

The seventh inning was the worst of it, best described by SB Nation’s Grant Bisbee: “There will never be an inning like this again. Send the whole thing to Cooperstown and bury it.” The bulk of the drama commenced when—with the score tied at two, a runner on third, and two outs—Jays catcher Russell Martin’s return throw to the mound hit Ranger Shin-Soo Choo’s bat and created a crazy situation where Rougned Odor was allowed to score. Multiple arduous umpire and manager conferences commenced on the call, the lengthy break allowing for a fierce buzzing anxiety to rise in an already temperamental SkyDome (er, Rogers Centre). There was no way we were willing to lose this way; no way we were willing to go down on a rarely implemented unintentional interference rule that seemed unjust.

Trash started to rain down on the field. Full beer cans were thrown, with one spraying beer on an unwitting baby. People aggressively chanted “bullshit,” and everyone looked ready to burn the whole place down. Players peeked out of the dugout to discourage fans from throwing things. Friends started texting me, asking if I was safe at my seat. Eventually I retreated to the bathroom, only to find angry people smoking.

The Rangers lead 3–2 as we went into the bottom of the seventh, with the Jays playing under protest.

Then came an unexpected and welcome downpour of Texas errors. Russell Martin got on base. Kevin Pillar got on base. Quick-footed Mississaugan Dalton Pompey pinch ran for Martin and advanced on another error, only to end up out at home on a Ben Revere hit. Josh Donaldson appeared at the plate like a saviour to tie everything up, knocking out a single that sent Pillar home and answered my pleading call of “Fix this, Josh.” 3–3. In terms of being in a position to win, “we” were right back where we started before the very ugly inning began.

And then Jose Bautista did the most Jose Bautista thing imaginable.  I’ve watched the moment easily a dozen times since it happened, and it never loses its intensity or its poetry. The undisputed king of the “fuck you” home run, Toronto’s all-star silver slugger got his ultimate, well-deserved revenge with a miraculous three-run blast. (I’m tearing up again just thinking about it.) The incredulous, in-your-face bat flip that followed, now legendary, could easily be the most justified showboating in the history of baseball. 6–3. Make a bronze statue of that man immediately.

From there we saw even more bench-clearing spats and fan misbehaviour, with the security and police officers on hand certainly earning their paycheques. By the time twenty-year-old closing pitcher Roberto Osuna came in to shut the whole preposterous affair down, we were all wondering what had actually happened over the past four hours. What was clear was that the Jays had gained the upper hand in the most dramatic way possible, and when the last strikeout happened (punctuated by Osuna making the sign of the cross), the delirious celebration rivalled the game itself in terms of emotional impact.

Generally sombre knuckleballer R. A. Dickey was exuberant, enthusiastically high-fiving a long line of fans in the front row. He passed one a bottle of champagne, took others’ phones and snapped pictures, and at one point kissed a stuffed turtle. He patted the butts of police officers, and then threw himself into the crowd for a warm collective embrace. Catcher Dioner Navarro somehow managed to score a police officer’s hat and wore it authoritatively while sucking on a cigar. Winning pitcher and comeback kid Marcus Stroman jumped up and onto his mentor Mark “Papa” Buehrle, in what might be one of the greatest baseball hugs of all time.  Of Bautista’s home run, Josh Donaldson said, “This guy is my hero.”

After the final out last night I made my way through the jubilant crowds and went home to rewatch the game from the seventh inning onward. Seeing it on screen made the whole thing feel almost fake, like a heartstring-tugging movie, as if someone had scripted it for maximum emotional impact. It was simultaneously so unlike baseball, and also the baseball I love the most—harrowing, excruciating, hopeful, and ultimately triumphant.

Toronto is a city that doesn’t really know how to win when it comes to sports, and these Blue Jays keep forcing us to understand that it’s possible. This team, with all its miraculous individual victories, actually feels more cohesive than any other I’ve ever witnessed, and has brought this city together in a way I wouldn’t have conceived possible. I’m more than willing to suffer through the stress of another series—and then the World Series—to see them rise to the top.

Any failings of faith I had when this series began have completely evaporated. Today, more than ever, we fans all know that rings are actually possible.