An Older Version of Me | The Walrus
Skip to content 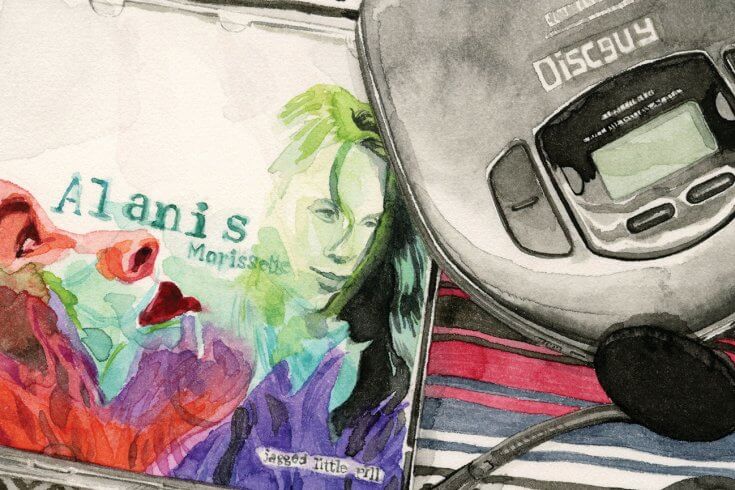 In the summer of 1995, my grandparents gave me Alanis Morissette’s Jagged Little Pill as a gift. I was thirteen, neither particularly feminine nor interested in sex, with no conscious designs on feminism. I placed the CD in my dad’s living room stereo. “Are you thinking of me when you fuck her? ” Morissette roared. My grandparents and I—and my father, stepmother, and seven-year-old sister—stood in the kitchen and listened together. We all felt embarrassed. Eventually, someone turned it off.

Soon after, I got my own stereo at my mother’s house, and I started listening to the album by myself. I was still very much a kid, but I could sense my teen years humming on the horizon, just out of reach. I had begun to realize that some art was made only for me. It was time to figure out who that person was. That fall, after long, confusing high school days, I’d heave my uncooperative body into my room and press play. At the first harmonica strain, I’d reach, almost involuntarily, to close the door.

Morissette was eighteen when she fled Ontario, her family, and the orchestrated pop career on which she’d built her name. Eventually, she found her way to Los Angeles, and to power producer Glen Ballard, who helped her write, record, and unleash the 33-million-plus-selling Jagged Little Pill in June 1995.

She had been working like a dog since she was a child. According to industry lore, she made her own demo at nine and got it to someone at MCA Records. She recorded two albums before her breakthrough: the poppy Alanis, in 1991, and a slower, less successful follow-up, Now Is the Time, in 1992. To say that Jagged Little Pill is a departure from those would be a considerable understatement.

Years later, Morissette revealed that she had once been in a sexual relationship with a music executive much older than her. He was twenty-nine, she was fourteen. She used words such as rape and abuse to describe the situation. The emotional repercussions of that relationship, coupled with pressure from the industry regarding her appearance, led her to suffer bouts of bulimia and anorexia.

She has displayed open contempt for her upbringing, and particularly for her father, Alan, a high school principal (poetically, she is named after him). In a 2008 interview with the Guardian, she called her childhood home “a chauvinistic, patriarchal environment.” Given that she was in a relationship with a man fifteen years her senior, it’s hard not to wonder where her parents fit into her life, if they did at all. The moment she could, she left them behind. By the time she rendezvoused with Ballard, she could only make a record like Jagged Little Pill. It tore out of her.

In her recent book, We Oughta Know, music journalist Andrea Warner discusses Morissette’s legacy in relation to a few of her contemporaries: Sarah McLachlan, Shania Twain, and Celine Dion. For a window in the mid- to late ’90s, Warner argues, these four Canadian women dominated the pop landscape. Yet even among those names, Morissette’s sticks out.* Why is that?

For one, she has always seemed utterly ordinary, unglamorous. She was first presented as Canada’s answer to the 1980s pop star Tiffany—a teen queen, a mall brat. But she didn’t quite fit, physically. I can imagine her then, with permed hair and white cowboy boots, shifting her weight from foot to foot, waiting to mount a stage in Sarnia or Mississauga or Sault Ste. Marie. She is nervous. Her mouth is Muppetish. Her hips already are too womanly; they offer something she can’t control. (In her periphery is the record exec, flashing a smile.) She is heavy, enduring puberty. She is not at all slim, streamlined, or commercial ready.

But above all, the difference is in the anger. On Jagged Little Pill, Morissette is an angry woman. This is partly lyrical—there are a lot of direct, unflinching attacks, some cheeky (“Now that I’m Miss Thing / Now that I’m a zillionaire / You scan the credits for your name / And wonder why it’s not there”) and some visceral (“Would she go down on you in a theatre? ”).

Mostly it’s the voice that’s angry, though—that huge caterwaul. She shares some aural territory with other female artists of the ’90s: Tori Amos, Björk, Fiona Apple. Each broadcasts her internal life with rawness, bravado, even hysteria. You can chalk the similarities up to the era—these were the days of Lilith Fair, after all—but try as you might to lump Morissette in, she keeps sliding away. She’s not folk-sincere enough to hang with McLachlan or Amos, not arena-pop enough to keep pace with Twain or Dion, not arty-weird enough for Björk or Apple. She is among them but not of them, screaming for dear life. “It was how we sometimes sounded on the inside, in our heads and in our hearts,” Warner writes of Morissette’s voice. “It was the sound of total abandon and calculated emotional manipulation, another seeming contrast and yet totally obvious space inherent in so many people.” People? Maybe. Young women? Definitely.

This is not a question of musical ability—just raw power. Which is why we were disappointed when she subsequently turned to a more tender, reflective sound. The success of Jagged Little Pill stunned her. Once again, the industry summoned her to be something else, and once again, she took off, this time to India. When she returned, mellowed and peaceful, she had no more screaming left to do. Anyway, by the time her follow-up, Supposed Former Infatuation Junkie, was released in 1998, the industry had moved on without her.

Thirteen years ago, I was nineteen, I was in university, and I wanted to be a culture writer. I met with the editor of the hip campus music magazine. She asked what female musicians I had admired growing up. I mentioned a handful with strong caveats—Jewel, Sarah McLachlan—but referred to Morissette with pride. The editor’s lip curled. “Yikes,” she said. “What about Sleater-Kinney, L7? ”

“Oh, of course,” I lied. I hadn’t heard of those bands. I grew up in small-town BC, educated by mainstream radio and MuchMusic. I left the magazine’s office with an enormous chip on my shoulder. Why, I wondered, were those bands better than what I liked? Back in my dorm, I downloaded Sleater-Kinney’s self-titled 1995 debut. It is one of the formative records of the feminist-punk riot grrrl movement, and it is the same age as Jagged Little Pill. Sleater-Kinney is angry, too, but theirs is a denser anger, dangerous and deep seated. Institutional. Contemplating it crushed me, whereas Jagged Little Pill made me feel unburdened, enlightened, possessed of will.

I asked many women my age for their thoughts on Jagged Little Pill, and more than one said it served as a gateway drug to harder female-first rock, riot grrrl or otherwise. But at her height, Morissette was dismissed by many critics as a pop echo of the legitimate work being done by riot grrrl bands, even though she arrived at the same time. This is a place she’s often found herself: edging between the mainstream and the hardcore. A 33-million-album-selling reject.

Women have to fight. The riot grrrl copes by grabbing this truth by the nutsack and shouting at it, fighting loud. She has with her an army, a scene, a support system. Morissette had no such community. She struggled to be an artist, and a man twice her age took advantage of her; she became one of the most popular musicians of her time only to face critics who called her derivative. Each time she had her back against the wall, she ran. She escaped. She went somewhere new and began again.

While Morissette has an online presence, including a Gwyneth Paltrow–esque website where she shares recipes and lifestyle info, she has not been in the press much since 2004, back when she was Ryan Reynolds’s fiancée. The pairing seemed as odd then as it does now. That he dated Scarlett Johansson next is the only part of the story that makes sense.

Morissette released an acoustic version of Jagged Little Pill in 2005, on the album’s tenth anniversary. It is a measure of the original’s power that the stripped-down version is very, very good. Her most recent effort is Havoc and Bright Lights, from 2012, which is when you’ll find the last spike of interest in her, save for a small bump in 2013, when plans emerged for a Jagged Little Pill musical. Earlier this year, after being inducted into the Canadian Music Hall of Fame, she announced her intention to remaster Jagged Little Pill, and to include a selection of personal essays and new songs.

Morissette generally seems more at ease these days. She acts, mostly in television, sometimes as herself. Her 2002 appearance on Curb Your Enthusiasm was wry and centred, as you sense she might be in real life. She was lovely as God in Kevin Smith’s otherwise middling Dogma. Like many women with difficult backgrounds and creative careers, she seems to have lived a thousand lifetimes already. Her son, Ever, is adorable. She lives in LA.

Think about a fourteen-year-old girl with no one, whose ticket out is a man with his hand on her thigh, and then think about why, twenty-six years on, she might just want to make kale smoothies and attachment-parent her child. I attempted to speak to her for this piece, but she declined.

“We are well advised to keep on nodding terms with the people we used to be,” Joan Didion wrote. Jagged Little Pill allows me to nod at the girl I once was, when my sense of self was new and precarious—which, perhaps, it still is and always will be. Women I know who love the album do not look how they are supposed to look, and they do not care about what they are supposed to care about. They are not cool. And yet they demand to be seen and understood.

I put this album on when I’m cleaning, cooking, moving apartments. It’s what I listen to when I’m leaving someone, losing something. It’s for when you are necessarily alone. The physical ripping apart of your life, soundtracked. It is still one of the biggest-selling albums ever, a secret handshake shared between millions of people across the globe. That scream at its core is the voice of a woman grappling with forces both internal and external. Press play and listen closely: the first sound you hear is a sharp intake of breath.

Kaitlin Fontana (kaitlinfontana.com) is a comedian and a frequent contributor to The Walrus.
Melinda Josie