Housebound and Bored? Turn Yourself into a Human Guinea Pig | The Walrus
Skip to content 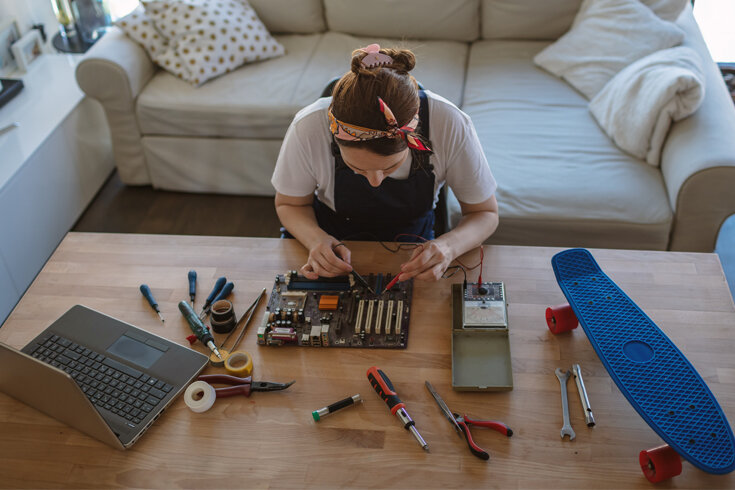 A basic rule of science is the more data points, the better. If you’re working with human subjects, you need enough of them to prove that your results apply not just to these people but to all people. Too small a sample size is a design flaw. But a single test subject—an “N of 1”—can still be useful if you run a controlled experiment for a long time.

When he was about twelve years old, Donald L. Unger, of Thousand Oaks, California, grew tired of his mother’s stern warnings whenever she heard him crack his knuckles: Don’t do that—it’ll give you arthritis. This sounded like BS. The boy was determined to prove his mother wrong. But how? He devised a test using the only guinea pig at hand: himself. He stopped cracking the knuckles of his right hand but continued his cracking habit with his left, making sure to do it at least twice per day. He kept this up for fifty years.

In 1990, Unger—now a physician and researcher—had his hands examined. There appeared to be no difference in arthritis creep. Aha! A triumphant rebuke to his mother—and one borne out, in those intervening decades, by other researchers, in other ways. In 2009, Unger was awarded an Ig Noble Prize, given to those who produce “achievements that first make people laugh, then think.” Unger’s venture is part of a long and storied tradition of folks experimenting on themselves. Plenty of things that have been discovered, invented, or confirmed would never have been without someone applying the basic algorithm: try something; observe results; learn; try again. And self-experimentation has arguably never mattered more. In today’s hypermediated world, with its steady diet of reconstituted information, self-experiments are a corrective. There is simply no substitute for personal experience.

Think of DIY science as a tree with many branches. Sometimes it’s done for high-minded reasons: to help humanity within the constraints of the Hippocratic oath. The Nuremberg code—put in place after the gruesome extent of medical testing by Nazi doctors came to light—forbids an experimenter from making their subject face any procedure they wouldn’t be willing to undergo themselves. Some scientists believe the only way to be totally sure they’re adhering to the code is to be their own test subjects. (Also, human trials require “informed consent”—but, as Nobel Prize–winning physicist Rosalyn Yalow pointed out, nobody can really give truly informed consent unless they helped design the trial. That’s why, she later admitted, “in our laboratory, we always used ourselves.”)

Sometimes, self-experimenting is done in the name of art—say, to test human limits, as Marina Abramović did during a show in Italy, when she allowed herself to be pummelled by strangers for several hours, or as Chris Burden did when he voluntarily took a bullet from close range. In the marketing world, self-experimentation is just good business. It’s dogfooding—a term that may trace back to Clement L. Hirsch, president of Kal Kan, who was rumoured to make a show, at the company’s annual general meetings, of opening a can of dog food and eating it with a fork in front of queasy shareholders. If you’re willing to demonstrate your product on yourself, that cements your credibility. The dogfooding metaphor has raced through Silicon Valley, where people pride themselves on beta testing their own products.

Sometimes, this has ended up working against the brand. Witness the recent parade of social media company insiders and software engineers—the ones who built those sticky engagement features—on the documentary The Social Dilemma, stepping forward, beetle-browed, to admit that they, too, have become addicted to their products. But there’s a simpler reason to experiment on yourself. It falls into the hopper of Why the hell not? There are lots of examples of people who, deep into seemingly interminable COVID-19 lockdowns with not a whole lot to do, found the most mundane aspects of their everyday lives weirdly magnified. Alone with our tics and neuroses, in the laboratories of our own homes, “we have turned into scientists of ourselves,” noted Sam Anderson, staff writer at The New York Times Magazine. Anderson found himself monitoring his intake of Doritos and then carefully, clinically noting how those little rafts of baked corn and flavour dust made him feel—before, during, and after he scarfed them down.

Other inward-bound argonauts have hatched experiments in a similar spirit. Like trying to construct a perfectly optimal day or making a list of things you’ve said or believed that you no longer agree with. As lockdown dragged on and she found herself housebound and mentally underemployed, writer Molly Young found “little harebrained ways to warp reality.” She tried “ground living” (no chairs). She wandered around naked and stayed up all night.

She ate a meal straight from the plate, like a dog, just to see what it was like. (“Sloppy.”) She practised considering doing stuff—making banana bread, investigating that stain on the carpet over there—without actually doing it. She called these little personal experiments “norm-shedding.” Her question to herself was: Does behaving unusually alter our perceptions of ourselves? If we are what we habitually do, then does changing what we do ripple back upriver and change who we are? Act like a different person for long enough and you eventually become one. And then the question is, When the experiment is over and you go back to your old ways—clothing and sleep and forks—do you find your old recognizable self waiting to meet you?

Upon reflection—and ye gads, there’s been plenty of time for it—many have come to realize that self-experimentation is actually just how we live our lives. We try to figure out how to surprise ourselves. We conduct little trials, some in public, some in private, kicking around what will take the edge off the restlessness and the fear. Some things prove reliably beneficial: exercise, facing something you’ve been avoiding, admitting mistakes, trying to make amends. Some of these experiments produce outsize results.

Some interventions, however, are fool’s gold and actually make things worse, leading to addictions and other wrong turns. It’s a trial-and-error world now. We are all Wile E. Coyote ordering stuff from Acme (er, Amazon) and seeing if any of it—the spring-loaded tennis shoes, the rocket-powered pogo stick, the instant icicle maker—gets us any closer to satisfaction.

Of course, what most of us have been futzing with is pretty low-stakes poker. As the COVID-19 crisis deepened, the death toll spiked, and a global all-hands-on-deck scramble for a vaccine ensued, a number of researchers hustled their trials along by testing their products on themselves. And it wasn’t just unaccredited biohackers who were eating their own dog food: it was some of the biggest names in experimental science. Last July, photos circulated of famed Harvard geneticist George Church shoving up his nose a vial of experimental COVID-19 nasal vaccine that he and twenty or so others, members of a rapid-response vaccine-development team, had churned out. When Gao Fu, the Chinese virologist and immunologist who heads the Chinese Center for Disease Control and Prevention, disclosed that he, too, had injected an experimental vaccine, he said it was partly to boost public confidence in vaccines. Convincing reluctant holdouts to buy in to COVID-19 vaccines may be the noblest dogfooding application of all: to sell the public on some needed pivot by defusing an unwarranted fear.

Twenty years ago, I carved my own modest notch into the self-experimentation bedpost when I underwent experimental dental surgery for a national magazine story. My reason was no more lofty than curiosity. (And, frankly, I needed the money.) The question under investigation was: To what extent can regular people override serious pain with a little mental training? The procedure, which involved the extraction of impacted wisdom teeth, was done at an alternative dental clinic in Calgary. It was successful only in the sense that I hung in till the end and lived. When I returned to Vancouver, my wife met me at the airport.