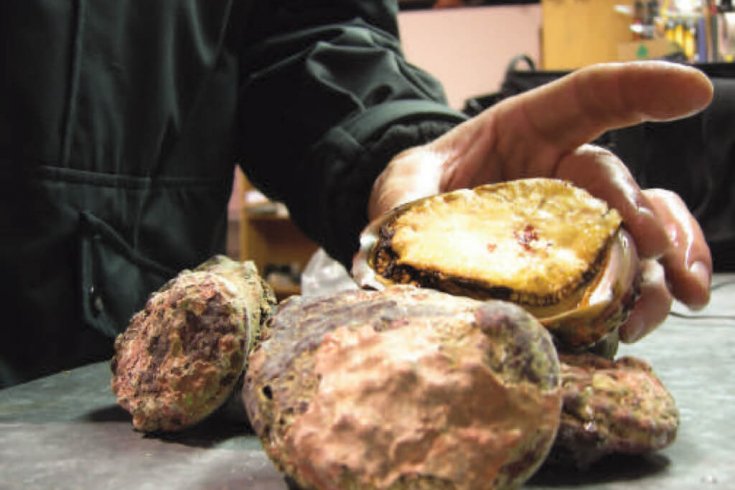 schooner cove—After radioing our coordinates to central command in Vancouver, a balding, grey-haired Bryan Jubinville leans back in his driver’s seat to give me my instructions. “Walk, don’t talk. We’ll stay in the canopy of the trees,” he says, smiling. Behind his glasses, his eyes never stop moving. “Bad guys use shadows—so can we.” We get out of the truck, careful not to slam any doors, and tiptoe toward the trailhead through the wet, blustery November night.

For Jubinville, the supervisor of the Department of Fisheries and Oceans (dfo) investigative unit for Vancouver Island’s south coast, bad guys are abalone poachers. In a typical night’s work, a diving team can harvest up to fifty kilograms of the ear-shaped molluscs, whose delicious flesh comes enclosed in iridescent shells coveted by jewellers and crafts-people worldwide. The poachers might then use the dead of night and the island’s heavily treed shorelines to stash their booty in bags for later pickup. A year ago at this beach in Schooner Cove, a small community about a half-hour’s drive north of Nanaimo, residents reported suspicious activity fitting that description. “Guys were parking at the top of the beach and beetling down to grab them, then driving off,” Jubinville had told me on our way in. This year he plans to catch them “with their hands in the cookie jar.”

When Jubinville, now fifty-one, started at dfo in 1977—at Rivers Inlet on the mainland coast—he and his buddies would wait till low tide, then harvest abalone by the handful. “We’d shuck them out of their shells right on the beach, hit ‘em with our beer bottles to tenderize the meat, and sauté them. We’d make abalone burgers and use what was left over the next day in a salad.” Jubinville searches for words to describe the taste. “Not like tuna or chicken. Scallopy, if anything. Meaty.”

But before long, the savoury treasures started to disappear. First the ones Jubinville and his friends collected, then the ones requiring scuba gear and a boat to harvest. Commercial harvesting was claiming too much, too fast, so in the early 1990s British Columbia closed its Northern Pinto abalone fishery, hoping to replenish the dwindling stocks. That’s when Jubinville and his squad hit the abalone beat: police protection, as it were, for the slow-growing shellfish. In the mid-1990s, however, dfo acknowledged that stocks weren’t rebounding. Someone in the department told Jubinville not to worry about it, that the abalone were dead. “That pissed me off.” Jubinville shakes his head. “I said, ‘I can’t accept that.’ I can’t write off a species. Your taxes pay me to protect those animals.” In 2000, the federal government declared abalone a threatened species, and Jubinville took up the challenge of defending them. “If I can’t do anything, let them be something I tried my damnedest on,” he says, glaring at the rocky islands in the distance.

We creep down the path toward Schooner Cove beach, careful not to slip on wet leaves or trip over driftwood. A few twigs snap, but other than that we’re as quiet as mice. Jubinville has come prepared. His thermal imager—a $10,000 unit that picks up infrared energy from human activity in the pitch black—rests in his hand, while his 9mm Smith & Wesson, pepper spray, and handcuffs hang from his belt. He raises the night-vision scope and slowly scans the beach.

Protecting the abalone hasn’t been easy—a declining global harvest in the 1990s coincided with an economic boom an extended period, and had to forfeit vehicles and equipment. David McGuire, an unemployed stay-at-home father who walked his daughter to school, boasted to police that he harvested $75,000 to $100,000 worth of abalone a year and sold them to three buyers in Vancouver and Victoria. Two of the three, a Chinese restaurant owner and a seafood distributor, were arrested, charged, and convicted in 2005; the third, another restaurateur, is now facing justice.

Compared with the scenes in other wild-abalone-producing nations, Canada’s poaching racket may seem like small-time crime—a raid on a high-level Australian poacher a few years ago yielded 31,004 abalone of a different species, with an estimated street value of more than $750,000 (Aus.). But a poacher busted in BC last February—in Port Simpson, outside of Jubinville’s jurisdiction—had a pickup truck stuffed with over 11,000 of the critters. “I was shocked when I heard the numbers,” Jubinville told a reporter at the time. “It sickens me. I’m disgusted.”

If Jubinville wants to exact some revenge against poachers, tonight is a good bet. As winter approaches, the kelp deep underwater diminishes, making the abalone clinging to rocks six to fifteen metres below low tide easier to find. Better still, market demand for abalone, which peaks between Christmas and Chinese New Year, is starting to build, and the poachers know it.

But on this evening, Schooner Cove beach is empty. The thermal imager reveals only a crisp white line as the frigid ocean water crashes against the muddy shoreline. Low clouds have rolled in, and the rain is turning to mist. No matter: we’ll sit and wait. If anyone’s out there, they picked the wrong night to go fishing.