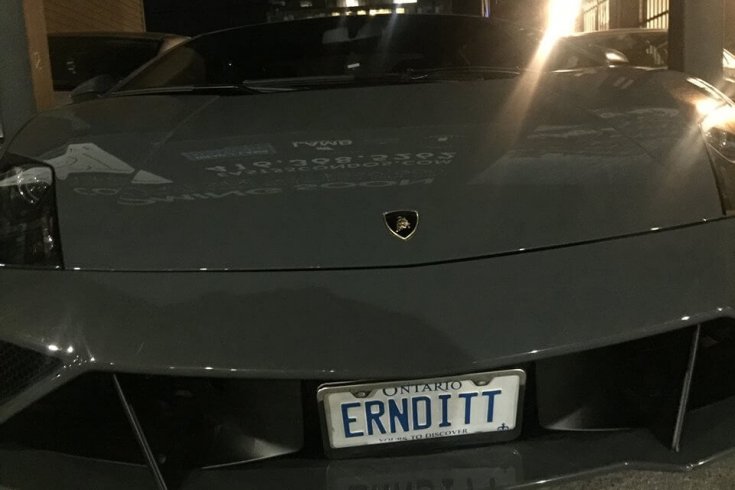 A Lamborghini's vanity plate in Toronto.

The idea came to me as I was waiting at a red light behind a black BMW X5 with the licence plate ROSEDALE.

I thought of all the other Torontonians who must have wanted to mark their car with the name of the city’s fanciest neighbourhood. What made this particular owner so special? Only the fact that he happened to be first in line at the provincial licence registrar. (All you need to acquire a personalized plate in Ontario is a $310 fee and a two-to-eight-character personalized message that does not connote “sexual and eliminatory functions,” “derogatory slang,” or “reference[s] to the use of or sale of legal or illegal drugs.”)

Other plates I’ve photographed over the years include the promotional MUSIC DJ (on the minivan of the guy who came to rock my daughter’s eleventh birthday party), the professional TOPBROKR (on a BMW M4), and the redundant I BENZ I (on a Mercedes GLA 230). A few nights ago, I spotted a magnificent quarter-million-dollar Lamborghini on Toronto’s Richmond Street, fronted with an Ontario plate reading ERNDITT. When I posted the picture to social media, my Twitter followers were predictably scathing. (“He probably just ran out of room for ‘with the assistance of the state and society,’” wrote one.) But amidst the pile-on, Walrus contributor Stephen Marche also supplied a moment of clarity, which gets to the heart of my proposal: “The truly horrifying thing about this is that there must already be a plate that reads ‘Erndit’ with one T.”

I don’t know who ERNDITT is. But I’m guessing that his extra T bothers him. He’s self-conscious about it. No matter what kind of car ERNDIT may be driving—no manner how little he has, in fact, actually ERND—it is ERNDITT who always will look second tier in the eyes of the vanity plate community.

Which raises the question: Exactly how much would ERNDITT pay to prove that he’s the rightful heir to ERNDIT (or, perhaps even better, EARNEDIT)? More than $310, surely. In fact, I’d be surprised if the number weren’t four or even five figures.

As things stand, the question is moot, since the province charges a flat fee for vanity plates, and the holders of these plates are entitled to renew them indefinitely. But why should that be? By means of an anonymous, sky’s-the-limit, internet-hosted auction process, the government could not only raise millions of dollars from high-roller ERNERS, it also could increase the status associated with the plates: The holder of ERNDIT would become known to the world as a man with money to burn. The same goes for ROSEDALE. And surely there is no better way to identify the real TOPBROKR than by finding out who has the biggest Bay Street bonus to blow on bumper bragging rights.

It would be potlatch in machine-pressed aluminium form, in other words—with all the proceeds going to government through purely voluntary extraction. Want to balance the budget? Let the vanity auction begin.

The Right of Return: Why We Want to Come Home