A Roost of One’s Own | The Walrus
Skip to content 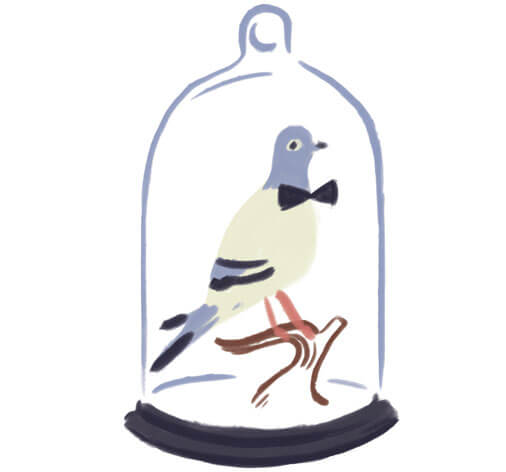 Pigeons are a fixture of city life. Wander into any urban park across Canada on a summer afternoon, and you will find the aged and lonely affectionately feeding the birds—though in many parts of the country, feeding wildlife is prohibited. Pigeon droppings, meanwhile, are not only unsightly but also acidic, and they can corrode metal and stone. Pigeons roosting in a badly chosen niche have been known to collapse a roof or set a building on fire. They carry lice and disease. They defecate in your hair.

Pigeons are attracted to the city for precisely the reasons we are: the profusion of food and entertainment, the trendy bustle, the ample housing promised by a skyline rich in high-rises. Canada’s steady urbanization improves the pigeon’s standard of living. As gleaming condominiums have materialized in urban centres, so too have a lot of spacious pigeon homes—right there in the glass crannies of the balconies. The rise of the condo in cities such as Toronto and Vancouver has been a boon for pigeons. They also benefit from recent green initiatives such as special reflective glass designed to reduce fatal bird collisions.

“People think of them as pests,” says Christian Szabo, founder and president of Pigeon Busters in Toronto. The pigeon-weary enlist specialists such as Szabo to ease the burden of the birds. His strategy emphasizes deterrence: in prospective urban nesting areas, he installs wire barriers and knotted polyethylene netting, or glues down thick belts of nail-like stainless-steel spikes so the pigeons have nowhere to land. Thus discouraged, they will give up and seek refuge elsewhere. “We just try to redirect them,” Szabo says. “On a grand scale, this might not be considered a solution, because we are just moving the bird from one place to somewhere else. But locally, this is absolutely a solution.” The pigeons will still be bothering someone—just not you.

Szabo is not an exterminator. Pigeon Busters doesn’t really “bust” anything. The work is chiefly preventative and involves hardly any contact with the birds at all. But the non-violent ethos isn’t, as one might suspect, a legal obligation. Pigeons are widely unprotected by law. Or so it seems: to research the Canadian pigeon’s legal status is to be baffled by ambiguity and apparent contradiction. Nobody seems quite sure whose responsibility the birds are.

Pigeons are not covered by Ontario’s Fish and Wildlife Conservation Act: a small-game licence, easy to procure, entitles you to hunt pigeons in the province as you please. A similar rule applies in Quebec. In both provinces, as well as in Nova Scotia and New Brunswick, a pigeon may be killed if it is poised to damage your property. In Saskatchewan and Alberta, pigeons may be killed without a licence, unless they happen to be in, say, a provincial park. In Prince Edward Island and British Columbia, a pigeon may be killed anywhere, on a whim. One might think that they would be protected federally under the Migratory Birds Convention Act. But no: the act applies only to species native to Canada, and the urban pigeon, much to its detriment, arrived from Europe and cannot be naturalized.

The pigeon’s rights are granted by a technicality: no living thing may be treated cruelly or caused to suffer unduly—meaning that while in most cases you’re welcome to kill a pigeon, you have to do it quickly. The same municipal bylaws that prohibit the feeding of wildlife in parks also prohibit their killing on park grounds. It is illegal to scatter poisons in areas where pets are liable to eat them, which is pretty much everywhere. Firearms, for obvious reasons, are not a reasonable recourse for the pigeon-harangued. “You can shoot a pigeon on your own property,” as Szabo unimprovably puts it, “but I wouldn’t be walking around with a pellet gun in downtown Toronto shooting all over the place, because you will get shot immediately by the police.”

At the scale Szabo is accustomed to, the problem is mainly logistical. How can so vast an execution be arranged? “It’s like, you trap a hundred birds,” Szabo muses. “What are you going to do, shoot them one by one? Put them in a gas chamber or something? It’s just inconceivable to me. It’s completely crazy.” You can see the difficulty. And anyway, think of the mess.

In any case, mass slaughter has a practical disadvantage. The pigeon population is maintained naturally, in accord with the food and shelter available. Killing pigeons opens a temporary vacuum—a vacuum the pigeons, ever tenacious if not forward-thinking, swiftly breed to fill. The birds, Szabo explains, “go into overdrive to repopulate,” and the end result is a ludicrous surge: “You’re actually causing an increase in the pigeon population by culling.” Kill them, and they multiply.

The pigeon cannot be easily suppressed or expunged. All you can do, if besieged by the birds, is hire a man like Szabo to persuade them to roost somewhere else. It’s like paying the Mafia to leave you alone instead of fighting to defeat them. “I can help a building or two buildings or a guy,” Szabo concedes. “The neighbour might have a problem next week. But to address this issue fundamentally: no, we don’t have a solution.” The answer is beyond him—beyond, perhaps, us all.

“I have to add, this is true of every problem in the world,” he says. “Illness, disease, global warming. There’s nobody who can give a solution to any problem that would make it disappear.”

Calum Marsh has written for the Guardian, The New Yorker, and Playboy.
Katty Maurey