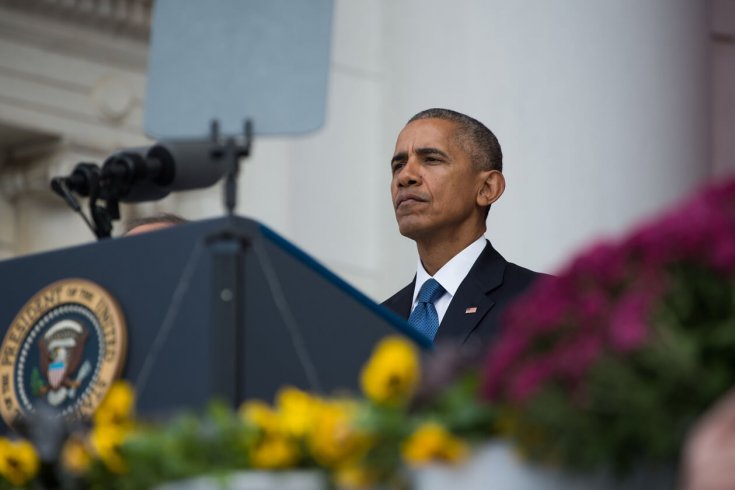 “This would not happen again, and everyone knew it. It was not just that there might never be another African American president of the United States. It was the feeling that this particular black family, the Obamas, represented the best of black people, the ultimate credit to the race, incomparable in elegance and bearing.”

So declares Ta-Nehisi Coates in his January/February Atlantic cover story, entitled “My President Was Black.” I’d thought that, after eight years, there wasn’t much left to say about Barack Obama’s race. But Coates’ thoughtful article proved otherwise. Perhaps that is because it was written in the shadow of Donald Trump’s election victory. Obama’s intellectualism, graces, natural optimism, and magnificent sense of composure have never sparkled more brightly than when set beside the grubby habits of his scowling successor.

Coates set out to write the definitive journalistic takeaway from the Obama presidency, as seen from an explicitly black perspective. But I was struck by how many of the passages—including the one I cite at the top—make every bit as much sense if you pluck out the word “black.”

Here’s another example: “His time in the White House has been an eight-year showcase of a healthy and successful black family spanning the generations, with two dogs to boot.” The brilliant, beautiful mom and dad who take up the mantle of leadership and success while still finding time to be loving spouses and parents. Few among my married friends—whatever their skin colour—do not aspire to this exact status.

Even in his most prosaic aspects, Obama struck me as a role model. In the New York Times, Michael Shear writes that “Obama calls himself a ‘night guy,’ and as president, he has come to consider the long, solitary hours after dark as essential as his time in the Oval Office. Almost every night that he is in the White House, Mr. Obama has dinner at 6:30 with his wife and daughters and then withdraws to . . . his private office down the hall from his bedroom on the second floor of the White House residence. There, his closest aides say, he spends four or five hours largely by himself. He works . . .  He reads . . .  The president also watches [sports] or plays [games] on his iPad. [His wife] occasionally pops in, but she goes to bed before the president, who is up so late he barely gets five hours of sleep a night.”

I remember reading those words, feeling a childish flush of pride, and thinking: “Hey, that’s how I spend my nights. I’m just like the President of the United States!” For that second, I felt like some ten-year-old Cold War kid learning that Neil Armstrong and I ate the same kind of breakfast cereal. No other politician in history ever inspired me in that way. When privileged white men tell our book clubs that Obama makes us feel “postracial,” that’s what we’re trying to get at. To me, he wasn’t black or white—just a vastly smarter, more successful and more even-keeled middle-aged guy whom we took as a role model.

Coates notes that Obama came into office “against the specter of black pathology, against the narrow images of welfare moms and deadbeat dads.” This fact makes Obama’s coolness under pressure even more admirable. It would be only natural for the man to have spent the last eight years with a chip on his shoulder, snapping viciously at critics who couched their attacks in crude stereotypes. But that was never his style.

Consider the West Virginia county employee who told her Facebook friends that “it will be so refreshing to have a classy, beautiful, dignified First Lady back in the White House. I’m tired of seeing [an] Ape in heels.” To my knowledge, the President never addressed this disgusting slur in public—in part, no doubt, because anytime he dropped even the mildest admonition of the treatment of blacks (Trayvon Martin and Henry Louis Gates Jr, for example), apoplectic conservatives would respond as if Obama were declaring a race war on white America. By disposition and political necessity alike, Obama always was the adult in the room, telling the shrieking man-children on FOX News to use their inside voices.

And yet in the hive mind of right-wing culture warriors—including those here in Canada—this truth is completely reversed: They invented a completely fictional Obama who was an unhinged race activist, a terrorist sympathizer, an anti-Semite, a Kenyan-born Sharia stooge, and a Saul Alinksy acolyte plotting to destroy American capitalism. The myth of this Bizzaro Obama has persisted even as Actual Obama has been playing the role of national father figure and patient turn-the-other-cheek Christian role model.

Back when he was working for FOX, Glenn Beck actually told his audience, with a straight face, that Obama has a “deep-seated hatred for white people.” This is literally the opposite of truth. As Coates argues, Obama “had an ability to emote a deep and sincere connection to the hearts and minds of black people, while never doubting the hearts of white people.” He grew up with a loving white mother, her own loving white family, and school friends who all taught him that “black folks were cool.” Unlike, say, Jesse Jackson, who tended to infuse a spirit of grievance into every campaign, Obama began every discussion from a baseline of white moral innocence.

It’s the quality that made him unique, writes Coates at the central hinge point of his Atlantic essay: “What Obama was able to offer white America is something very few African Americans could—trust. The vast majority of us [blacks] are, necessarily, too crippled by our defenses to ever consider such a proposition. But Obama, through a mixture of ancestral connections and distance from the poisons of Jim Crow, can credibly and sincerely trust the majority population of this country . . .  He stands firm in his own cultural traditions and says to the country something virtually no black person can, but every president must: ‘I believe you.’”

Obama often was casually referred to as the most liberal politician to occupy the White House. And his conservative critics claim to justify their scathing attacks on this basis. But as the last eight years have gone by, there has been a growing disconnect between right-wing Obama hatred and the nature of his actual policies. Obama has been a ruthless enemy of terrorists—and has conducted the war against jihadist groups in a manner that is broadly supported by the military establishment. He is a far greater champion of free trade—which is to say, capitalism among nations—than Donald Trump. “Obamacare” isn’t much different from the GOP-drafted replacement that eventually may replace it. And as described above, his “family values” are above reproach, by even the most stringent standards.

In his actual speeches to black people, Coates notes, Obama lectured them to stop watching TV, eat healthier foods, stay in school, show up to work and stop blaming white people for all their problems. Obama was so robotic in hammering home this deeply conservative message, in fact, that he sometimes spread it at weird times—like when he was lecturing black college graduates who, presumably, didn’t spend their lives bad mouthing Whitey at Burger King.

Any conservative who makes a habit of reading the Wall Street Journal editorial page, the Weekly Standard, or Commentary will recognize the sort of message described in the previous paragraph. Dating back to Daniel Patrick Moynihan’s 1965 report, The Negro Family: The Case for National Action, this is the traditional, conservative, pro-family, pro-education, pro-job message that has come through whenever right-wing social critics (including Black specimens in this category, such as Bill Cosby and Thomas Sowell) took aim at the black community. According to this refrain, it is black “culture” that is the villain—unwed black mothers, a dependence on welfare and other handouts, high crime, the glorification of street corner thugs, and victimhood mentality. Obama railed against all those things.

By what pathology of thought could Obama, the very opposite of a race hustler, stand as a villain in the conservative imagination, while Trump, whose whole campaign was based on hustling race and religion, be held up as a champion who will “Make America Great Again”? When a Trump staffer was asked on Wednesday night whether Kanye West had been asked to perform at the inauguration festivities, the staffer suggested the black rapper might not be “typically and traditionally American.” It’s not clear what he meant by that. But if he meant what I think it means, the statement would seem consistent with the sentiments of Trump himself, who led the original Birther campaign to defame Obama as an illegitimate American.

We know what this pathology is, don’t we. Can anyone tell me its name?