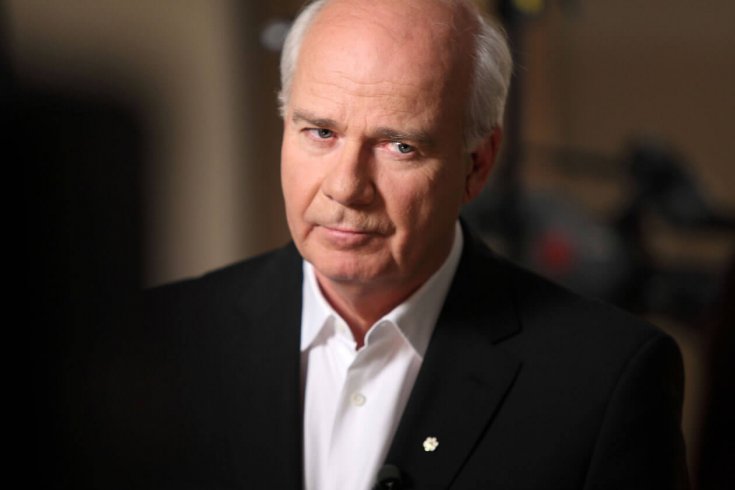 Photo by the CBC

“Good evening, I’m Peter Mansbridge and this…” You know the rest.

For nearly thirty years, a million viewers, on average, have tuned in to The National each night to hear Mansbridge recite his familiar address before delving into “the day’s top stories.” And while the hair around his temples has grown whiter, not much else has changed over the past three decades; Mansbridge has remained the epitome of the CBC News brand—trustworthy, authoritative, and safe—and The National has continued its coverage of breaking news stories and global events.

However, on July 1, after nearly 11,000 shows, Mansbridge will step down from his position as chief correspondent and anchor of CBC’s flagship news program. For the 16.5 million average viewers who watch The National over the course of a season, it will feel like a loss; for others, his departure is a welcome “about time” after decades of an unchanged newscast that has grown stale both in its structure and its delivery. His exit offers an opportunity for the CBC to appoint a fresh face to their brand, one that better reflects the new generation of viewers that it yearns to attract. But in its quest to find relevance, the CBC should proceed with caution; its previous attempts at appealing to a younger demographic—like George Stroumboulopoulos’s over enthusiastic approach to hosting Tonight or Shad’s painfully awkward one-year tenancy on q—have arguably done more to alienate audiences than to engage them.

The CBC, along with Mansbridge himself, have said little about the anchor’s departure save for a few cryptic hints and circulated memos. In early March, editor-in-chief Jennifer McGuire sent out one such memo to all CBC News staff, outlining a plan to push the department toward a more digitally focused future. “We remain at the forefront of innovation in breaking news and original journalism. And yet our structure hasn’t always kept pace,” McGuire wrote. “We are still largely organized around broadcast platforms, news gathering, and a separate digital operation.”

Change doesn’t seem to come naturally to the CBC, whose strategies remain stuck in the twentieth century. For more than a decade,
The National’s ratings have been stagnant, while Canadians’ trust in media has steadily declined. The ‘90s saw an attempt at restructuring the program: the format at the time was a twenty-two-minute-long news segment at the top of the hour and a current affairs program, The Journal, at the bottom. They combined it into an hour-long news and current affairs show, Primetime News. It was a complete failure. Mark Bulgutch, a former line-up editor for The National who was working on the program at the time, says he knew that the merger wasn’t going to work. “The CBC continues to try to find the right format; to find better formats; to find smarter formats,” Bulgutch says. “It turns its back on the audience at its own peril—when looking for new audiences you’ve got to be careful that you don’t turn off the one that you already have.” The National returned to its pre-merger version a year later, and has remained more or less the same ever since.

McGuire’s March memo goes on to describe a new categorization for the various CBC News departments; The National falls under “Depth and Context,” headed by Jonathan Whitten, a long-time CBC staffer who McGuire describes as her “deputy.” The plan was for Whitten to work in close contact with McGuire’s newest hire, Steve Ladurantaye, who was originally taken on because of his digital expertise. Ladurantaye had previously worked at Twitter, teaching newsrooms across North America how to efficiently use the platform. He is now, ironically, best known for his participation in the cultural appropriation Twitter controversy. Ladurantaye’s tweet placed the CBC between a rock and a hard place—eventually he was reassigned, just two months after being appointed lead of The National’s revamping project.

As Bulgutch points out, it’s not necessarily the structure of the program that needs updating; The National’s competitors have succeeded in spite of, or perhaps because of, their staid format. “CTV has done the same newscast for sixty years,” he says. “They have an average audience bigger than The National’s audience every night and they don’t do anything different than they did in 1965.”

However, CTV has done one thing differently: when long-time anchor Lloyd Robertson retired, they hired a woman, Lisa Laflamme, to take his place. And while it’s difficult to assess her effect on ratings, it highlights a larger problem at The National, beyond its bland format and digital ineptitude. Since 1954, there have been eight permanent news anchors—all of them have been white, middle-aged men.

“If it is called The National it needs to reflect Canada and its demographic a lot better,” says Asmaa Malik, an assistant professor at Ryerson’s School of Journalism, whose research has focused on social media and diaspora. “Maybe that means a series of hosts.”

The idea of incorporating multiple hosts has been the one detail that’s come closest to being confirmed—both Mansbridge and McGuire have hinted at it more than once over the past few weeks in interviews, at public events, and through internal memos. As recently as May 24, during CBC’s Upfront event, Mansbridge spoke about a new “host or hosts” that would replace him, and McGuire later conceded that multiple anchors would allow for more field reporting and less behind-the-desk news announcing.

However, if a more diversified group of anchors are to replace Mansbridge, Malik warns that it’s easy for them to be pigeonholed. “What a lot of racialized journalists face is that they are put in that position and expected that they would only be talking about [certain kinds of stories],” she says. “I think that’s a bigger problem in Canadian journalism and something that really needs to be broken away from because that may even be worse.”

Beyond concerns about who is being represented, audiences are also wondering if the stories are being represented accurately. In 2014, StatsCan reported that more Canadians trusted banks or the police than they did the media. While broadcast remains the most trusted source of news when compared to other platforms, this technicality doesn’t give segments like The National a free pass to eschew accountability. As Malik argues, a national newscast should be covering stories that affect all Canadians, and be willing to acknowledge when it’s lacking. However, Craig Silverman, Buzzfeed’s media editor, doesn’t think that having multiple hosts will achieve a diversified program. If anything, he says, having more than one host would alienate the loyal viewers that have been keeping The National afloat for so long. “I think they would want what they’ve been getting,” he says.

To balance the needs of an aging demographic of viewers and those of a younger, more digitally inclined one, Silverman suggests CBC take on a print mindset: legacy publications who want to focus on digital typically downsize their print departments, but are still able to produce the print product that their base audience wants. “Just carve out the newscast and say that this [The National] is going to be a much smaller part of our effort, and it’s going to be one part of a new kind of content production system.” At the end of the day, if The National isn’t able to attract younger viewers, it definitely doesn’t want to alienate its loyal, older ones.

The most problematic issue, Silverman says, is that when Knowlton Nash ceded his chair to Mansbridge in 1988, he was passing on the Canadian institution. “The National doesn’t necessarily have the place that it had before. And so it’s not just finding a new anchor for the program, it’s a moment to rethink the whole thing.” And this is where Malik, Bulgutch, and Silverman all agree: if a push toward digital is the main goal of The National’s revamp, it can’t just mean cutting existing videos to make them more digital friendly; a systemic change needs to happen. Yes, the anchor is important—but what’s more important is who produces the content, and whose stories are represented.

For better or worse, and according to the CBC’s 2017-2018 programming slate, a new version of The National will return this fall. The time has come for the public broadcaster to make the fundamental changes necessary to regain its viewers’ trust and to prove its worth—before its audience signs off for good.

Allison Baker is is a freelance journalist and the producer of Mi'kmaq Matters, a podcast about the Mi'kmaq people of Newfoundland and a former Joseph Fellow at The Walrus.