A Glimpse into Shoptopia | The Walrus
Skip to content 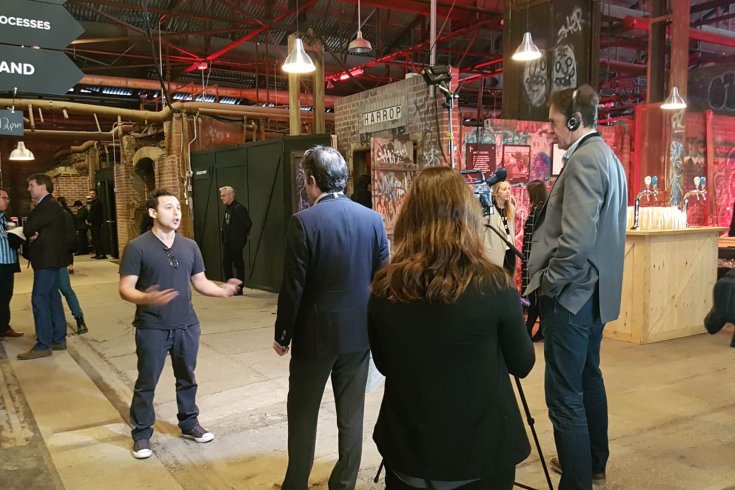 Harley Finkelstein is interviewed at the Go North conference in Toronto.

When Shopify COO Harley Finkelstein talks about jobs, he divides them into three categories—drawn from his experience as a third-generation Jewish immigrant growing up in Montreal.

His grandfather, who fled to Canada after the Hungarian Revolution, was interested in survival—anything “to put a roof over his family’s head and food on their table,” Finkelstein tells me in our interview. Finkelstein’s dad, on the other hand, who ended up owning a clothing company, was looking for safety. “You know the expression ‘Ma Bell’? That’s what people still wanted in his day—the warm embrace of a big company.”

But Finkelstein, thirty-two, now sees the focus on fulfillment. “I looked at [Google] data on the number of times the search term ‘safe career’ was used instead of the words ‘fulfilling career,’ from 1985 until today, and you see safety in decline and fulfillment on the incline.”

Speaking to me at Friday’s Go North conference at Toronto’s Brickworks (“a one-day event dedicated to Canada’s startup ecosystem”), Finkelstein described his own job as extremely fulfilling—ecstatically so, in fact. Shopify, his Ottawa-based e-commerce giant, lies at the very heart of our digital retail economy, offering software for online stores all around the planet.

The company’s influence is enormous. “Just a few years ago, if I picked up a phone to call someone like Deepak Chopra [President of Canada Post], he wouldn’t have answered me. But now he would—because he knows progress in this country has to be a collaboration involving both government and tech companies.”

As we talk, Navdeep Bains, Canada’s Minister of Innovation, Science, and Economic Development, is delivering a keynote address from the Go North stage, praising the software developers in attendance for their role in creating tomorrow’s economy. A generation ago, Canada’s biggest companies went to Ottawa looking for corporate welfare. At events like this—which features speakers from Uber, Kik, Ritual, and a dozen other industry leaders—the migration pattern is reversed, with politicians seeking to pin their brand to these twenty- and thirty-something whiz kids.

Paradoxically, part of Finkelstein’s thrill lies in the sheer precariousness that attends the winner-take-all nature of dot-com life. “My job could not be less safe,” he tells me, speaking faster than perhaps any other person I’ve ever interviewed. “Every day, I feel completely out of my comfort zone—out of my depth. I’m [the COO of a] multi-billion-dollar publicly traded company. So I have gotten very comfortable being uncomfortable.”

This penchant for risk-taking and uncertainty seems to be the one constant that runs through this Google Canada event. During a morning panel on “Canada as a Global Player,” Michele Romanow, co-founder of SnapSaves and Buytopia, talks about the plans industry players make in case their start-ups “go to shit.” A while ago, you started a business by paying someone in China to create a prototype, while you painstakingly got start-up capital, generated inventory, and eventually sold orders. Now, entrepreneurs can compress all of these steps into a Kickstarter campaign—which allows them to move on to the next big thing if the initial idea flops. The hard reality of business failure is hard-wired into the model.

Finkelstein is proud of the way that Shopify has helped democratize capitalism’s digital arena. “Ted [Kik co-founder Ted Livingston, who’d been one of Finkelstein’s Friday morning co-panelists] talks about software ‘eating the world’—which sounds scary,” he says. “But what that means is Netflix eating the local video store. It means iTunes eating the record store. It means Uber eating the taxis. While it seems negative, what we’re talking about here is making it easy for people to get the things they want. Anyone. That’s what we do. It used to be that you had to be Walmart, Sears, or Canadian Tire to afford a really good online store. Now, for $29 a month, you can have the same quality [online store] from Shopify.”

Finkelstein’s tech evangelism is relentless. Even by industry standards, he seems fantastically on-message. And he emphasizes that the tech revolution will benefit people of all ages—even if the median employee age at Shopify itself is just twenty-nine. “My own mother uses Uber. My dad uses AirBnB when he goes on business trips. My grandparents get their toothpaste and paper towels from an Amazon subscription service. My daughter is four months old. She’ll probably never drive a car or go to college.” (Instead, he believes she will be taking free online coding courses from Stanford University or Khan Academy.)

But software doesn’t just “eat” companies, I remind him. It eats people. Not everyone wants to start a company. Some people just want to drive a cab, work at a record store, draw a paycheque. What about the guy who used to have the good union job, but now scratches by delivering UberEATS sandwiches to office workers like me?

“Well let’s take a look at that guy delivering UberEATS,” Finkelstein says, without missing a beat. “Maybe that guy is going home at night and making children’s toys in his garage, and then maybe he puts them on Shopify and sells them, all with zero upfront investment. What I see is that we’re going to be commercializing our hobbies. Our work-life mix is going to be full of that sort of thing. That guy flipping burgers? What if we make a machine that flips burgers so he is free to build whatever he wants in his home. That person can now get on the net and sell to a market of billions of people. Compare that to the old days, when he’d be selling it through a [bricks and mortar] store that kept half the money.”

Speaking to Finkelstein, and others like him at this event, you quickly come to understand that their vision for the future is not just about technology or economics. It is about human nature, and the pursuit of perfect human satisfaction. While many of us look around and see beaten-down drudges who barely have the energy to dress themselves, let along start a new business out of their garage, the Finkelsteins of the world see everyone as a potential Homo Digitus. “What [workers like me] want is for our Sunday nights to feel like our Friday nights, and our Monday mornings to feel like Saturday mornings,” he tells me. “The whole idea of ‘TGIF’ is ridiculous. We don’t want to spend 80 percent of our waking hours feeling like drudgery.”

As we wrap up, Finkelstein slows down his manic speaking pace—only slightly—as he returns to the subject of his own father.

“My dad was in Montreal’s shmata business,” he says. “We would joke and call him a shamtologist. I remember that he’d have to go to Korea and Bangladesh for samples. If he was doing all this today, he could do it all with a $1,000 3-D printer. He wouldn’t have to leave.”

“What he really has always wanted to do is volunteer work—helping immigrant families in our community who are going through the same thing our own family once went through. But he’s going to have to wait till retirement for his real life’s work to start. And that’s what this is about—because that’s not something I will ever have to do.”