A Future Without Sharks | The Walrus
Skip to content 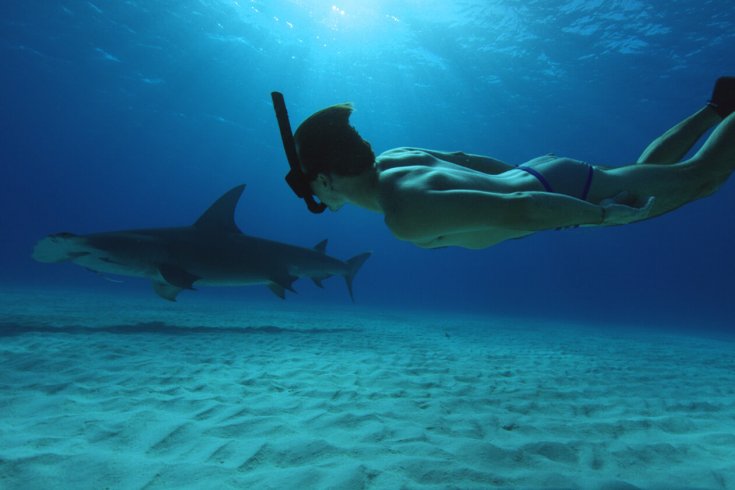 On January 31, 2017, Canadian filmmaker and conservationist Rob Stewart set out on what would be his final dive. He was in the Florida Keys filming a much-anticipated sequel to Sharkwater, his popular and influential 2006 documentary that focused on the brutal practice of finning sharks alive by the millions each year. After the third dive of the day, Stewart resurfaced briefly and made eye contact with the crew. He gave the okay signal, and the crew turned to help his diving buddy, who seemed to be in distress. While their backs were turned, Stewart disappeared.

Stewart’s death remains disputed: a medical examiner ruled the cause drowning and the manner of death accidental, but the US Coast Guard report on the incident has not been made public. In 2017, Stewart’s family launched a wrongful-death lawsuit against the diving outfit and Peter Sotis, the man who was diving with him that day.

When Stewart drowned, he left behind hundreds of hours of footage and copious notes on how he wanted the sequel documentary to unfold. His family hired a team to finish what he’d started. The result is Sharkwater Extinction, which premiered at the Toronto International Film Festival in September and was widely released on October 19. It’s a hymn to the wonder and beauty and uncertain future of sharks as well as a call to arms to save them. It’s also a meditation on the precariousness of life in general and Stewart’s life in particular.

“I got lost in the ocean,” says Stewart in the ghostly voice-over that opens Sharkwater Extinction, as we watch him dive down, sinking slowly into the water and swimming across a sandy white bottom. “I was underwater, took a wrong turn, got stuck in some currents, and by the time I surfaced, I was a mile and a half away from where I should have been.” He thought he was going to die. He had only one option, he told himself: don’t give up.

As Stewart narrates, the camera slowly turns upside down, until the light-soaked surface of the ocean is sitting at the bottom of the frame. It’s a metaphor, he tells us, for the ecological crisis that faces all of us. “If we give up, 100 percent, we’re dead. You can’t give up.” Then his face appears in the camera, his liquid blue eyes peering through the scuba mask as he swims toward us, holding the camera in outstretched arms, seeming to embrace the frame and us. It’s tempting to call this melodrama, except that the crises—and the species grappling with the crises—are entirely real.

It is easy to forget that for most of our history, human history, the ocean has been a dark pool of danger. Before we saw them bleaching, dying, coral reefs were things to avoid: they wrecked ships and slashed the skin of inattentive swimmers with their knife-sharp skeletons. Tsunamis swallowed coastal towns, storms swallowed boats whole. Whales swallowed Jonah and Captain Ahab’s leg. But nothing was more fearsome than the watchful eye, toothy grimace, and menacing fin of a prehistoric-looking shark.

Only recently has our view begun to shift, helped along by new technologies and new stories we have started to tell ourselves. First, we found a way to breathe in the alien environment of the sea: oceanographer and underwater explorer Jacques Cousteau and engineer Émile Gagnan invented the Aqua-Lung in 1943, allowing anyone, not just superhuman free divers, to plumb the ocean’s depths. Scuba diving was born.

Around the same time, Cousteau’s friend and colleague Harold “Doc” Edgerton, an MIT engineer and high-speed photography pioneer, was developing technologies that would allow millions to share these underwater adventures. He created powerful strobes that could light up an underwater scene, so photographers could capture it in all its colour-drenched glory. Now anyone with a thousand dollars and a bit of know-how can build themselves a remote-operated vehicle or slip an iPhone into a plastic case to film a shallow dive. Anyone with access to a screen can marvel at the slow ballet of a magnificent blue whale and her calf or the clownish grin of a parrotfish as it scrapes and gnaws a coral polyp between its teeth.

The images that flooded our televisions and laptops and phones began to look less and less alien and dangerous: instead, they underscored the ocean’s beauty and fragility, a perception reinforced by story after story about how we are destroying this once pristine, half-wild environment. Through the domed lens of an underwater camera, the enemy no longer looks like the ocean or the many creatures living in it. Instead, the enemy looks a lot like us.

Much has changed since Stewart filmed his first shark documentary. Years of diving and filming and chasing and being chased by illegal fishers has taken a visible toll. He looks thinner and harrowed beyond his years. (He was thirty-seven at the time of his death.)

Shark finning is now banned in dozens of countries, thanks in part to Stewart’s tireless efforts, but the practice is still common—it has just been driven underground. And many countries still allow fins to be imported, so it’s easy for the fin industry to exploit this loophole. Canada is currently one of the largest importers in the world; we brought in more than 140,000 kilograms of fins in 2016. This will soon change: a bill to ban importation to Canada is now in its third reading in the Senate and will likely be given royal assent in early 2019.

The global shark-fin trade peaked in the early 2000s, as Stewart began work on his first documentary. This might seem like a good thing, but declining numbers may have less to do with a change in fishing effort than an overall decline in shark abundance. A 2009 study by the International Union for the Conservation of Nature (IUCN), a network that relies on the input of some 13,000 experts around the globe, found that nearly one third of open-ocean sharks are threatened with extinction. Current estimates of global shark deaths vary, but the Food and Agriculture Organization of the United Nations measures landings in tonnes, which the IUCN translates into an estimated total of 100 million shark deaths per year. (It acknowledges that the range could be anywhere from 63 to 273 million.) While finning remains the primary driver of these deaths, sharks are also turning up at fish counters (often mislabelled as swordfish or flake), in pet food, in fertilizers, and in cosmetics.

And yet, somehow, Stewart remains resolutely optimistic. A touching idealism propels Stewart, and his last film, forward. If we just knew what he knew, we would rise up and demand change. “I think the biggest issue we have on the planet right now, aside from the environment, is our lack of awareness of what’s going on,” he tells us as his crew prepares to leave a wharf under the cover of darkness to investigate sharks twisted and tied up in mile-long gillnets sweeping through the ocean just outside of Los Angeles. “We don’t know about our individual actions, about our consumption, about our governments and corporations destroying our life-support system. If we did, our morals would engage and we’d be guided to a world that works. We’d hold our friends and our families and our governments accountable for this stuff, but we just don’t know what’s going on.”

Stewart’s world below the surface is beautiful and unhurried and magisterial. On terra firma, camera movements are jittery and jumpy, and the built world, the human world we’ve created for ourselves, seems alienating and menacing: we see the hold of a large ship packed with hundreds of frozen shark carcasses, a drone zooming in on an open panel of a warehouse that contains what appears to be thousands of drying of shark fins, a shopping cart rolling under the strange fluorescent lighting of a grocery store.

When Stewart and his crew surface after the stealth inspection of the gillnets in Los Angeles, we hear gunshots. Stewart and his diving partner Brock Cahill quickly clamber into the boat and speed away. Cahill tells us it’s one of their last dives together.

And then we, the audience, follow Stewart to Florida for the very last dive.

Though the circumstances of Stewart’s death are disputed, what we do know is that Stewart and his buddy were using rebreather systems, which recycle the diver’s own breath. Rebreathers are especially useful for underwater filmmakers because they produce no bubbles, which makes them quieter and less likely to scare off wildlife. But the systems can also be more complicated to use, allowing the user to dive deeper and longer, and therefore can be more risky.

Stewart was adept at setting out the rational arguments for why sharks need our protection. There is our duty to protect the vulnerable, our duty to make right what we as a species have wronged. There is the more self-interested argument that these top predators keep the ocean ecosystem—which is a major planetary ecosystem—in balance. But what Stewart excelled at—and what made him a powerful a voice in shark conservation—was his capacity for intimacy with his audience and with the underwater world he loved. “My goal,” he says in Sharkwater Extinction, “is to make people fall in love with sharks.” He wore his activism on his sleeve, and the images he collected nudged the dial of public opinion, chipping away at our deep-seated fears. His films helped transform sharks from horror-movie protagonists to vulnerable animals in desperate need of our help.

The sharks we meet with Stewart are anything but scary. They are slow moving, curious, and content to rest in his arms like dogs while he pats their flanks. Hammerheads look goofy and sweet. When we meet the oceanic white tip shark—the most dangerous of all sharks, according to Cousteau, and now classified as vulnerable by the IUCN—Stewart tells us they are “absolute sweethearts” with “the most expressive and curious eyes I’ve seen in any shark.”

He tells the audience he wants us to see ourselves in these sharks as one of them swims past the camera, rolling its eye upward, like a cheeky teenager listening to her dad. Then the shark bodychecks the lens as if to say, “Look at me. I’m still here.”