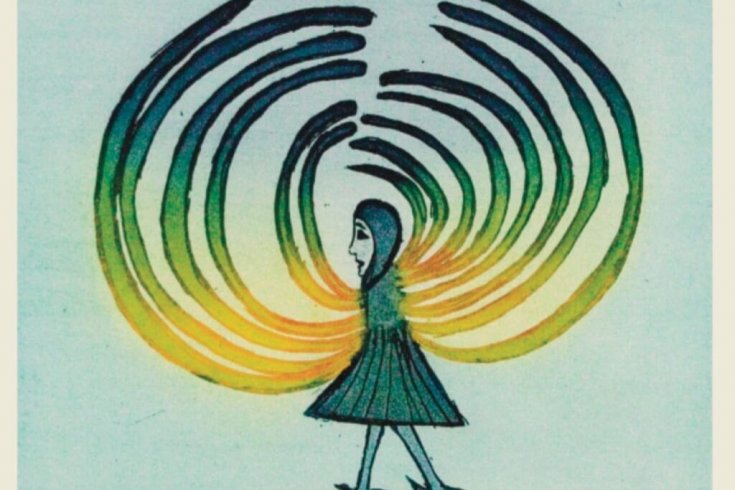 ellesmere island — In summertime, the two-metre-thick polar ice fractures into a kaleidoscope of floating floes, some as large as a city, others too tipsy to stand on. If wind drives the ice in one direction and the current pushes it in another, floes will swirl in huge eddies, collide with a dull rumble like distant thunder, and stack up on one another to form horizontally layered towers like the sandstone cliffs of the Grand Canyon. At other times, the ice will relax and spread out, leaving open-water leads where mother guillemots swim with their peeping broods.

Chris and I were travelling along the eastern coast of Ellesmere Island, across drifting floes, driven to move quickly because we were half-starved and racing to reach a small village in Greenland, yet under caution to travel slowly because the fractured, ice-choked seascape can be deadly. When we found a large floe that was thick and safe, coloured white with summer snow, we trudged comfortably northward, pulling our kayaks like sleds. But many floes were covered with water. Often, these pools floated on solid ice, and we would continue trudging, splashing with the joy of six-year-olds blessed by an infinity of puddles. Other times, the water hid thin ice or an old agloo, a seal breathing hole, its edges melted by the sea beneath. Then we’d back up and search for safe ice before proceeding.

Each floe was an island surrounded by a lead of black, frigid water. If the lead was narrow, we’d jump to the next floe, barely breaking stride. If the lead was too wide, we’d slip into our kayaks and paddle across. Because every wasted motion delayed our progress toward food, we hardly ever bothered to don life jackets or secure ourselves in the cockpits with our waterproof spray skirts. Jump in the boat. Paddle until the path was blocked. Climb onto another floe. Resume trudging. Every step required analysis, decision, and risk.

That’s the glory and allure of Arctic travel. Make a decision. Risk your life. Take a step. Good. Make another decision. Take another step. There were many steps between here and Greenland. No mistakes.

We stopped and each ate a boiled gull egg that I had gathered the day before by climbing in bulky rubber boots up to a crag where gulls perched. I took one egg from each nest as the mothers screeched and dived at me with bared talons. We were a little late in the season, and each egg contained a tiny embryo with feathers, feet, and white eyeballs tucked into its protective external womb — but we were starving.

After our snack, we continued on, jumping across tipsy pans onto tenuous landings. We both concentrated on the immediate terrain. When I finally looked up at the broader landscape, I saw a polar bear a few hundred yards away, running straight at me. It was leaping in great strides, its huge paws stretched out like an Olympic athlete, flying over leads, landing on shifting ice, baggy fur glistening in the summer sunlight.

I’d had many previous encounters with bears. Every time before, the bear had stopped, stood up, raised its sensitive nose, and sniffed. Then it had shuffled off, as if uneasily making a decision, giving me time to react, to communicate — mammal to mammal, predator to predator. But this bear was running, not thinking.

I took a step back and started to unclasp the waterproof rifle case lashed to the front deck of my kayak. The quick-release latches had worked so rapidly in the living room back home, but now, as the bear grew larger, they seemed cumbersome. The bear’s torpedo-like head stuck straight out from between its shoulders, leaving only a small target on its chest. I probably had only one shot, and it had to be good. I unfastened the second buckle and grasped the smooth, comforting curves of the wooden stock. As I slid the gun out of the case, I heard crunching in the snow behind me and then sensed another motion in my peripheral vision.

Chris streaked past me, running straight at the bear and waving her arms. Then she planted her feet and screamed, “Go away, bear!”

The bear rocked back onto its hind paws, made a sharp right turn, and ran away, across the broken ice, agilely jumping leads and ice ridges. I remained motionless, kneeling by the side of the kayak with the half-sheathed rifle in one hand and Chris in front of me. I slowly slipped the gun back into the case and re-clasped the buckles. Chris turned and walked over to me.

“That was cute!” I said. “And, if you hadn’t scared the bear, you were right in my line of fire.”

She answered that the bear wasn’t charging. Clearly it was running toward us. But in previous encounters, bears had stood and studied us before acting. Chris thought that the bear was running toward some other destination and, like us, was concentrating on the jumbled ice. So it didn’t see us, even though it was running right at us. All three of us were just looking down, floe-hopping. Chris’s counter-charge was merely her way of announcing our existence and telling the bear to run in some other direction.

“And if your theory were wrong?” I asked, “You were in my line of fire.”

I smiled. The moment was forever etched into my brain, joining a plethora of other such moments that have enriched my life. Another moment. We were hungry. Chris was right. Time to get going.