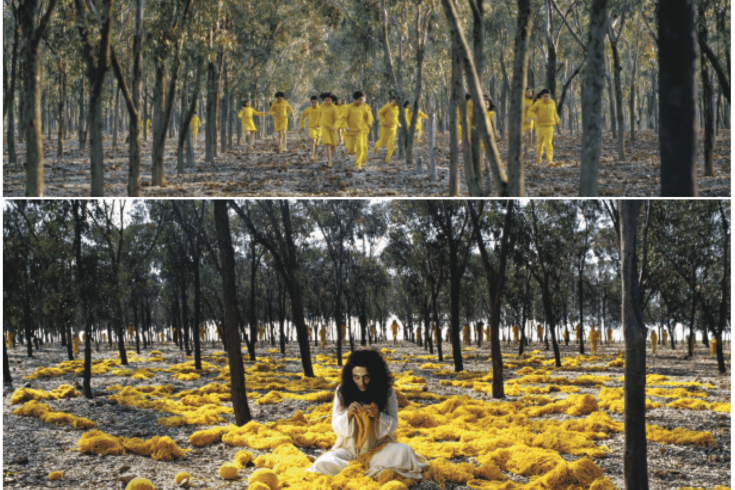 “At the age of seventeen I left Iran for the United States, and after the Iranian revolution in 1979 couldn’t visit for twelve years. I last returned in 1996, but haven’t been back for security reasons. Still, over the past two years Tehran’s Museum of Contemporary Art has exhibited several of my videos, including Mahdokht. Unfortunately, the politics of Iran’s new government ensures that my art will no longer be shown at the museum.”

“Mahdokht is named after one of five women in Shahrnush Parsipur’s novel Women Without Men, which is banned in Iran. Parsipur spent five years in prison for her literature and now lives in California, which is where I had the pleasure of finding her. I’ve been scripting her book into a feature-length film, though Mahdokht works as a video installation.”

“Mahdokht is a metaphoric character, living in fear of sexuality, but also obsessed by fertility. In my video, she whispers to herself in Farsi, ‘If I had more fingers I would’ve been able to knit more sweaters, and have more children.’ Knitting isn’t common in Islam but symbolically it makes sense here. I wanted Mahdokht to exist in a dreamlike state of complete madness, to give the viewer the feeling of entering this woman’s tormented mind. In Parsipur’s novel, Mahdokht commits suicide, and by doing so metamorphoses into a tree that bears fruit, with seeds that disseminate into the world. Mahdokht is my most surrealistic film. The nature of the character demands it.”

“Magic realism is a common style for artists in exile like Parsipur. People who have been forced from their homes tend to reach out for a universal vocabulary that transcends time and place. After all, how long can an exile depend on their memory? What if they don’t feel connected to the place where they live now? They might not foster an obsession for their new home. But art is an obsession—art has to be an urge, not something you calculate.”

The Right Side of the Road