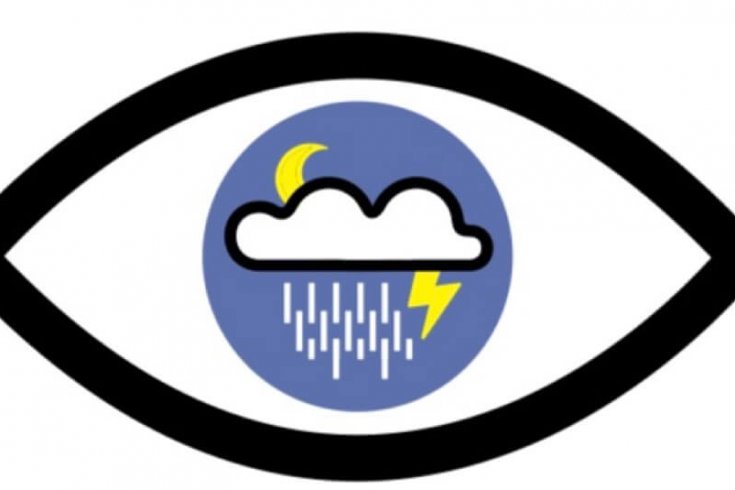 It hit 12°C in Toronto on Friday, January 20, and the weekend forecast promised to follow the mood of the nation: changeable. Unable to sleep, around 5 a.m. on Saturday I went to work. All was quiet as a gentle breeze blew through the financial district. The business towers, many shaped like enormous dollar bills, created wind tunnels, and as the breeze picked up small eddies formed, carrying torn newspapers and other detritus skyward. Rain started to fall, dampening and beating back the flight of trash. Upon arrival at the office, snow that verged on hail began pelting the pavement. By 8 a.m., the wind was blowing harder, the temperature had dipped, and the almost-hail became snowflakes as large as any the city had seen all winter. It was above freezing, but only marginally, and as the snow seemed determined to land and to last, I headed home, thinking that tobogganing might be in order.

Breaking the silence of the tree-lined streets were weary citizens opening their doors to grab the morning paper. There they found the latest polls announcing the likely results of Monday’s federal election. For eight weeks, Ekos, Ipsos Reid, The Strategic Counsel, and Environics had etched themselves onto the collective consciousness of the country. During a restive election campaign cut in half by Christmas, a continuous volley of polls made the names of these companies more familiar than the sons and daughters of neighbours, the local newsstand proprietor, or colleagues at the various work stations responsible for providing the services or creating the information for a service-and information-based society. The information provided by the polls was, apparently, our beliefs. Standing out as knowledge, as true and justified belief announced by humble sociologists turned less-humble statisticians and surveyors, the polls served the maximum purpose of providing easy-to-read and ever-changing copy inches for the news dailies; they also assured the nation that decisions were being made, that views were hardening (as they should with the date approaching), and that the result of Monday’s vote was predictable.

By noon on Saturday the wind was still blowing, but the sun was out and the snow had vanished. Toboggans were put away. Clouds scudded across the sky, mimicking the furious movement of party leaders traversing the nation to shore up support. In print the polls had stopped, but on the Internet they were still churning. As night fell, parents gathered their children from the streets and back alleys. The wind had dropped and weather reports suggested a warm and dry election day — just the type of day favoured by democrats anxious about a low voter turnout.

Sunday provided the welcome distractions of the nfl conference finals, the Australian Open, Kobe Bryant lighting up the Toronto Raptors for eighty-one hardwood points (before a clutch of celebrities in Los Angeles), nods to the Winter Olympics in Turin, and a reminder that life exists outside our borders. During an election campaign in which Kyoto, the Canadian military in Afghanistan, and US-Canada relations were all shelved in favour of the more parochial concerns of national unity, day care, and the relative merits of direct versus indirect taxation, anything indicating life elsewhere was a soothing balm. But the games themselves were runaway victories (or cast into the future), and so the high drama of sport gave way to news dispatches about our federal contest. While it was a small poll — with a margin of error approaching 100 percent as opposed to the 1.9 percent nineteen times out of twenty that we have grown accustomed to — on Sunday night the gang of four neighbours I asked all said they were determined to vote, but for whom and for what they were unsure.

Until the final week, with the forbidden fruit of victory so close and therefore the temptation too tempting, the Conservatives had run an almost flawless campaign. Bettering the Liberals at their own game — strategy — they came out of the gate early with “Stand Up for Canada.” Led by a man who co-authored the infamous Alberta “firewall” letter and who is contemptuous of central power, it was both a master stroke and an obvious lie. Stephen Harper’s not-so-hidden agenda was and is to radically transform federalism by redressing the “fiscal imbalance,” to allow the quisling provincial premiers to run their own shows on social programs, to allow Quebec to be itself at unesco meetings, and so on, down a long list that will reduce Ottawa’s status to that of cash register for the bleating regions. Nonetheless, “Stand Up for Canada” was proclaimed, and in the Liberal war room there was anxiety: the ideologue had become a pragmatist, a man willing to say or do almost anything to win, and now a real battle was underway.

The Liberals had chosen to wait, to enjoy some decent claret over Christmas, to let the upstart wear himself out, and to swing open the gates of their campaign after New Year’s. Hitting the hustings in earnest with “Choose Your Canada,” they joined the race with a thud. Whether from the back of a train, on television, or even co-opted by sympathetic bloggers, such a slogan does not lead. The Liberal mantra more properly described the policy direction of the Conservatives, but coming from the Liberals it amounted to saying: it is true, we are impotent and in your hands; it is a buyer’s market and we will let you be whatever you would like to be. And so, in the first debate, when Bloc Québécois Leader Gilles Duceppe said “Quebec is a nation,” Martin, having already handed him the choice of picking his own Canada, said nothing. Harper also said nothing, perfectly content with Duceppe’s regional characterization. Indeed, believing in sovereignty-association for all, and especially for his adopted province of Alberta, the now-prime minister must have relished the moment as another victory for “open federalism.”

As January rolled toward voting day, the press was criticized for framing the debate, for tilting the scales of fair comment by portraying Stephen Harper as a fun-loving, snowball-throwing regular guy and Paul Martin as an aged former dean of finance, not Machiavellian enough for the job and unable to find fracture points in Harper’s armour. Jack Layton, preferring seats to principles and eschewing the notion that the ndp are simply Liberals in a hurry, set his sights on Martin. But the narcissism of such small differences can be easily discerned by good readers, and during the campaign there was a reasonable variety of coverage. And when the editorial pages affirmed a point of view, chose a party to back, and so forth, one could take issue with the positions taken. The ubiquitous polls, on the other hand, produced an altogether different phenomenon: except for saying “rubbish” or “I knew it,” there was nothing to argue against.

While the asking of questions to gauge public sentiment is or can be value-neutral, in the 2005–2006 federal campaign, the daily or biweekly publishing of polling results produced a meta-narrative———“the polls are saying” or “the polls suggest”———that, while unhinged from substantial ideas or issues, nonetheless determined people’s actions. According to my most unscientific sampling, the issues du jour on voting day had nothing to do with the fact that, on that day, Ford cut its workforce by 25 percent, or any other concern that might propel people to the voting booth with an axe to grind or a hope to realize. Instead, the chimeric effect of the polls was to turn us all into strategic voters. The question was not what do I believe in, but rather how should I mark my ballot to avoid this or that outcome.

There is a happier interpretation to what transpired, which, happier still, cannot be tested. The composition of Parliament has since changed — with a Liberal here becoming a Tory there and a stray Montrealer with no seat in the House doing “public works” in Cabinet — but the result of the 2006 election amounted to the very thing that led to the dissolution of Parliament in 2004: a delicious result wherein one member sat as an Independent and potentially held the balance of power. Then, it was Chuck Cadman; after the 2006 election, it was André Arthur, a plain-spoken, quasi-libertarian, extremely popular former radio host at Montreal’s cknu. Inside Blocdom the thinking must have been, “What if Mr. Harper’s ‘open federalism’ negates our raison d’état and leaves Mr. Duceppe with nothing to argue against? With our fifty-one seats, what alternative do we have but to scurry over to the other disappointed group, the Liberals, and tempt them — after securing Mr. Arthur — with the magic number 155, and with the potential dissolution of Parliament?”

Not once, but twice, the collective will of the Canadian voting public — sixty-odd percent of them, at least — determined that Parliament’s tenure could be cut short by one independent voice. It is too coincidental. Only through some grand telepathic communication across all regions, languages, ethnicities, could Canadians resolve that independent voices will rule. Perhaps Canadians are saying, “The gig is up. We systematically lie to pollsters and door-to-door canvassers alike, and the symbol of our independence (from self-referential and self-important polling, and from pitchmen in general) was affirmed through Mr. Cadman in 2004 and is affirmed through Mr. Arthur today. That this grand charade, which has produced a minority government less secure than the last, will be replaced by another and another until someone somewhere produces a national vision which forces upon the body politic the sublimation of personal ego and regional interests. That we, in fact, will hold you hostage.”

But Mr. Harper did his math post-election. “Disallow the Liberal/Bloc potential by bribing Mr. Emerson — whose Vancouver riding supported us with a whopping 19 percent — to cross the floor. What is one Cabinet position for a turncoat worth?” Harper must have thought. “The natural governing party, the Liberals, asked such questions for years. It served them well and kept us in the principled wilderness. Well, my new hedonic calculus, my will to power, now dictates that I too can hold the electorate in contempt, that voting is nothing but a parlour game that I control.”

But there may be an upside to all these numbers games. As the popularity of Sudoku is proving, numbers — the placing of one here to offset another there — can be seductive and sublime. And as the polls turned us all into strategic voters, our number became the X marked on a ballot. It felt good, frankly, to be in the game of calibrating outcomes, especially given the result — a virtual non-government in a country that obviously relishes abstractions.

And then there was Harper’s election after-math. While we obsessed over fractions, he introduced a whole new arithmetic.

The Right Side of the Road