Death Takes a Holiday | The Walrus
Skip to content 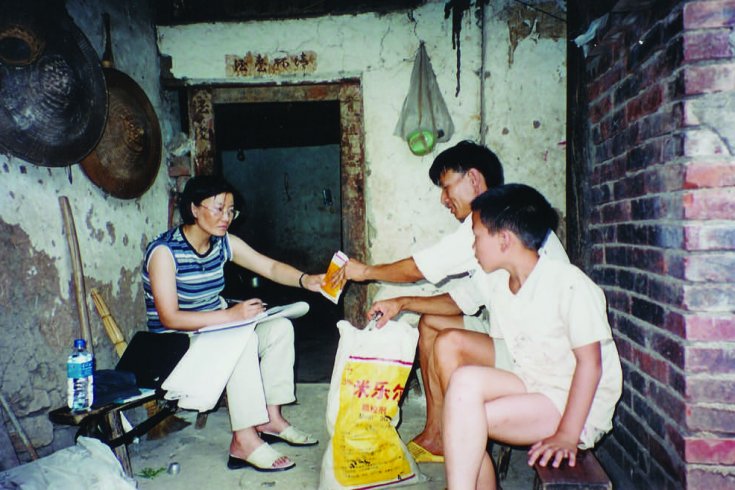 The rate of suicide in China’s vast rural areas is among the highest in the world. The ingestion of pesticide is the most common method. / Photograph by Jessica Hamburger

beijing — Controlling the use of highly toxic pesticides, Dr. Michael Phillips is saying, is the single most effective measure China could take to improve the mental health of its people. He has been lobbying to get the dangers of such chemicals recognized, talking to health officials and physicians about them. He is absent-mindedly eating a big piece of watermelon as he says this. But it isn’t tainted fruit that worries him. Nor is it China’s poor environmental track record.

“I think banning pesticides would have a much greater effect on lowering suicide rates than anything else you could do,” he says.

Phillips, who is Canadian-born, has lived in China for more than twenty years, and he is leading a pioneering effort to address one of China’s most serious public-health issues: suicide. It is the fifth leading cause of death in the country and the leading cause among women aged fifteen to thirty-four. Phillips is the executive director of the Beijing Suicide Research and Prevention Center, based at China’s largest psychiatric hospital, a publicly funded centre that is the first of its kind in China. In addition to its research work, the centre operates a clinic that provides direct services to suicidal patients and their families.

According to the World Health Organization, almost a million people commit suicide each year worldwide. An estimated quarter of those are in China. Most suicides in China occur in rural areas (the rate in the countryside is three to four times as high as that of urban areas) and the method in more than half the cases is ingesting industrial-strength pesticides and rat poisons, which are readily available on farms and in villages.

Beyond the obvious and devastating social effects (Phillips says over a hundred and sixty thousand children lose parents to suicide every year in China), suicide also has what Phillips calls “a substantial economic impact.” The loss of productivity from suicide is great, because of the high rate among people under thirty-five who would have had many working years left. “It should get at least as much in resources as aids,” says Phillips.

But until recently, social and political conditions in China made even the discussion of suicide taboo. Under Communism, suicide suggested a failure on society’s part, which reflected poorly on the state. (It was also sometimes seen as a form of rebellion against the state.) In a country where overpopulation poses an enormous challenge, suicide also wasn’t an issue that rose easily to the top of the political agenda. Suicide statistics were not collected and made public until 1987.

Not only are prevention efforts new—Phillips’s centre opened its doors less than two years ago—little research has been done that’s specific to suicide in China, and the information researchers do have is incomplete. For example, recent research by Phillips and others seems to indicate that suicide in China is often an impulsive response to a stressful situation — a fight with a spouse, say—rather than the result of a long depression. Some researchers have hypothesized that the belief that suicide is part of the cycle of reincarnation, hurrying the passage on to a better life, may be a contributing factor to the high rates. There is much speculation, but no solid data, about why the rate among young rural women is so high (65,000 every year, says Phillips). With little evidence of the mental illness that usually precedes suicide in the West, it is difficult and often ineffective to apply Western methods of diagnosis and prevention in China.

Phillips, who is fifty-five and has thick, greying hair and large glasses, may be uniquely suited to the task of using Western research to help create a prevention model specific to China. His medical specialty is psychiatry; he also studied social anthropology during his residency. And he speaks fluent Mandarin. Perhaps most importantly, he feels driven to address the problem. With the fervour of a crusader, he talks about how he has lobbied Chinese government officials and international health organizations to get the problem of suicide noticed.

The situation is beginning to change in China’s urban areas. Since his centre opened, others like it have been built in Shanghai, Hangzhou, and Chengdu. The government, too, has begun to acknowledge the need to address the problem. Among other things, it has sponsored several conferences on the subject and permitted the establishment of such centres. The practice of psychiatry, once marginalized, is starting to gain more credibility. Just over a year ago, Phillips and his colleagues set up the country’s first national suicide hotline. Its four phone lines get anywhere from eighty to almost a thousand calls each day from around the country.

But while those in rural areas — at least those with access to telephones can reach helplines, they have access to little other support. The harshness of the pesticide method combined with the poor quality of rural health clinics contributes to extremely high success rates. While many suicide methods common in the West, such as pill overdose, are relatively easily treated at even small hospitals, rural Chinese clinics are often far from villages and their doctors ill-equipped to handle poison ingestion. Some rural officials still deny that there are suicides, and even naming the problem is a problem. The Mandarin word for depression (yi yu zheng) was coined only in the mid-1980s, says Dr. Zhang Jie, a sociologist at the State University of New York whose work focuses on suicide in China; most peasants wouldn’t even recognize the term. People talk of being “unhappy,” and are unlikely to seek help.

Phillips remains undaunted. In addition to his political lobbying, he is working with other researchers to fill in the gaps in the still-sketchy data. Until then, he’s covering all the bases: working for increased public education and better monitoring for at-risk people, such as newly married young women and elderly people who live alone.

Then there are the pesticides. He is investigating the effectiveness of manufacturers adding emetics, so a person who drinks it automatically vomits it back up. (There is concern that this could cause aspiration, which could hasten the absorption of the poison.)Failing that, he is urging the government to license pesticide use and make poisons controlled substances that must be kept under lock and key. He acknowledges that the farmers need pesticides but suggests they could use less potent chemicals. He’d like to see an all-out ban on the most toxic chemicals, both within and outside the country. (China is a major manufacturer, as well as user, of pesticides.) Phillips even suggests that if Western countries would stop importing pesticide-treated produce from China, Chinese farmers would be forced to give up their use.

Phillips is kept busy working long days and most weekends. His wife, an American-born psychiatric nurse, works with him at the centre. While it never seems to be enough, there is plenty to do. Two nurses in starched white caps are waiting anxiously in the hallway when Phillips leads me to his office for our meeting. A man is standing on a bridge somewhere in Beijing, threatening to jump. His family is on the phone, begging Dr. Phillips to talk him down. He excuses himself, and an assistant brings me coffee as I settle on a bench in the hallway to wait.