Money for Nothing, a Reno For Free | The Walrus
Skip to content 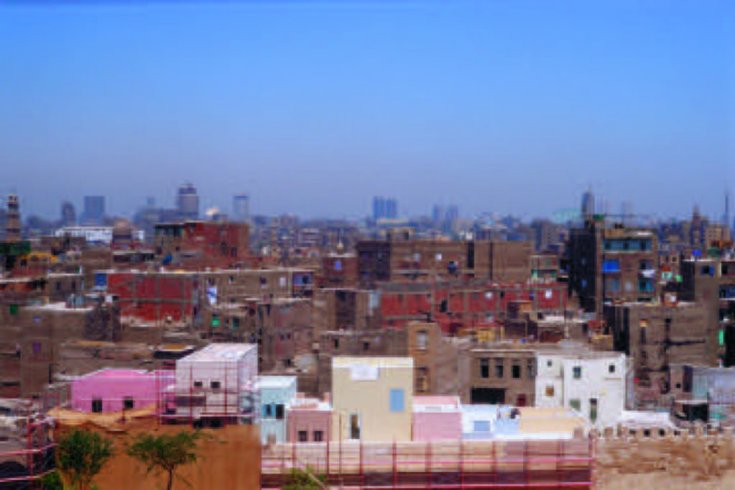 cairo— In Khan al-Khalili bazaar, near the two-hundred-year-old al-Fishawi café where the Nobel laureate Naguib Mahfouz penned his magnificent sagas of Egyptian life, two tiny girls in ragged party dresses stomped joyfully through the puddles of a burst water main. Across the street in Darb al-Ahmar, middle-aged men were playing rapid-fire card games at one of the thousands of coffee houses where the Egyptian male measures out his life with coffee spoons. In the dusty shops and alleyways of this impoverished district at the heart of Islamic Cairo, the spirit of the medieval capital endures.

Change has come to Cairo, as evidenced by the forest of satellite dishes sprouting from centuries-old tenements, or the call to prayer from a far-off mosque, blaring through a sound system along with Jimi Hendrix-style feedback as the muezzin completes his sound check: “Allah . . . (tap tap) . . . Allah . . . (tap tap) . . . Allah . . . ” Yet rarely does progress improve daily life for most people who live in this polluted metropolis of seventeen million, and seldom does it help neighbourhoods such as this one.

It is something of an anomaly that Darb al-Ahmar—home to hundreds of historically significant buildings and to some two hundred thousand Egyptians who survive on a dollar or two a day — has become the site of a unique urban intervention designed to reconcile two goals that are typically in opposition in the modern world: development and conservation. At issue is the fact that many of Darb al-Ahmar’s derelict stone and brick houses have been built close to, or into, a historic twelfth-century wall constructed as a fortification against invaders by the great Sultan Saladin (best known for kicking the Crusaders out of Jerusalem). Saladin’s Wall remained largely forgotten for centuries, buried so deep under rubble that even Napoleon’s efficient team of experts omitted it from their early-nineteenth-century maps. The construction of a lush new park nearby has changed that.

The al-Azhar Park project was conceived twenty years ago by Prince Karim Aga Khan, the Geneva-born, Harvard-educated spiritual leader of the world’s fifteen million Shia Ismaili Muslims who is purportedly a direct descendent of the Prophet Mohammed. The idea was to create a park as a gift to the city of Cairo, which was established by his ancestors, the Fatimid caliphs. Built by the Aga Khan Trust for Culture (aktc) through its Historic Cities Support Program, the park would act as the much-needed “lungs” of a metropolis that had less than a footprint of green space per person.

And so a massive rubble dump—“a monument in garbage to the endurance of Cairo,” as the writer Max Rodenbeck called its five hundred years of accumulated debris—was transformed into the mile-long jewel of green that is al-Azhar Park. Situated high on a hill next to the thousand-year-old mosque of al-Azhar, the world’s oldest university, are more than six hundred thousand plants, thriving in soil that previously had the salinity of the Red Sea. When construction for that project uncovered much of Saladin’s Wall, the aktc launched an archaeological restoration that led it to confront the many problems plaguing Darb-al-Ahmar, which borders the park beyond the Wall.

Egypt’s antiquities laws usually protect historic sites the old-fashioned way, by simply evicting nearby residents and demolishing their houses. Darb al-Ahmar has been through a round of such evictions, and its residents, faced with pending demolition orders, have had little incentive to prevent the area from sliding into decline. (Ironically, this has protected the area from overzealous developers who have effectively turned many historic areas of Cairo into interchangeable high-rise complexes.)

The aktc has taken a very different approach. “The Wall, being a monument, should not be a threat to the community,” said Dr. Mohamed El-Mikawi, general manager of the ambitious urban-development project. He explained in his office high atop al-Azhar Park that when residents are evicted to preserve monuments, most are uprooted to satellite communities around Cairo. Within months, many leave their new homes and head straight back to Darb al-Ahmar, where they take what meagre shelter they can find. “They live in a small room, sometimes with no running water,” he explained, “because . . . employment is nearby, the kids can play and are taken care of by neighbours, and people feel secure in their community.”

Egypt’s Supreme Council of Antiquities initially ordered the aktc to demolish all housing within thirty metres of the Wall. This would have involved relocating thousands of families, said Dr. Mikawi. “When we refused, they came back and said, ‘Okay, let’s demolish ten metres only.’ We held to our guns and said, ‘No, we won’t demolish any.’”

Thus began a pilot project to renovate some of the dilapidated tenements bordering the Wall. “At the beginning people were a bit suspicious,” Seif El Rashidi, a young Egyptian urban planner with the project, explained. Even where renovations were offered free of charge, only the boldest accepted. “People thought that what we wanted to do was just demolish the whole area.” Rashidi is one of many local professionals employed by the project, which has helped offset the chronic brain drain afflicting Egypt’s educated class. Indeed, many Egyptian professionals spend their careers working in the wealthy Gulf States or elsewhere, given the dearth of opportunities to employ their skills at home.

“When we said that we were creating a park on the hills behind, they didn’t believe us,” he continued. “It was only when we started doing work like restoration and employing local residents, and it started to become obvious that this was in fact a park and not some project we were trying to hide, that people became much more interested.” (Drawing on the philosophy that has made the Aga Khan a leader in international development—his philanthropic organizations have contributed significantly to the rebuilding of Afghanistan, for instance—the aktc has also extended micro-credit business loans, a third of which are directed to women, and instituted skills-development programs in order to contract sophisticated tilework and carpentry to local businesses, with the long-term goal of keeping traditional crafts alive.)

To date, nineteen dwellings, housing seventy families, have been transformed into modest Mediterranean-style townhouses. Another two hundred home renovations are envisaged. The aktc has established a community health clinic and employment program, partially restored two medieval mosques and a palace, and rescued a former school building, built into Saladin’s Wall, from demolition by transforming it into an elegant community centre. It includes two children’s libraries, a computer lab, an employment centre, and an outdoor community cinema.

The renovations have had some unforeseen effects. With tenants temporarily vacating their homes during renovations, at least one landlord, prohibited by law from hiking the rent (and perhaps resentful that the rental home is now nicer than his own), has tried to reclaim the property by deeming it abandoned. There are also concerns that while the renovations are intended to inspire further community development, future projects may not take as sensitive an approach. Egyptian elites continue to view the area as a crime- and drug-riddled slum. “If Darb al-Ahmar was totally destroyed,” Rashidi said, “not many people would care.” Where local authorities have begun to grasp the value of historic areas, he says they typically view them as a “cash cow.” Worse than gentrifying, he said, “they tend to work towards something more serious: Disneyfication.” They envisage the kind of “Oriental bazaar” that is a caricature of the neighbourhood, intended to attract tourists rather than serve residents.

In the meantime, to the surprise of locals, the construction of al-Azhar Park has brought many benefits, not least the park itself. Compared with the frenzy of life in Darb al-Ahmar — of life anywhere in Cairo — its hilltop vista is remarkably quiet. Orchards and formal gardens of native Egyptian plants are interspersed with sunken gardens that lead to a pavilion-café perched on a small lake. From there a promenade bordered by swaying royal palm trees ascends to the five-star Hilltop restaurant. Under the midday sun, a few employees are tending plants or sweeping the promenade, and a young man pauses to unroll his mat to pray.