Smacking Down the Vote | The Walrus
Skip to content 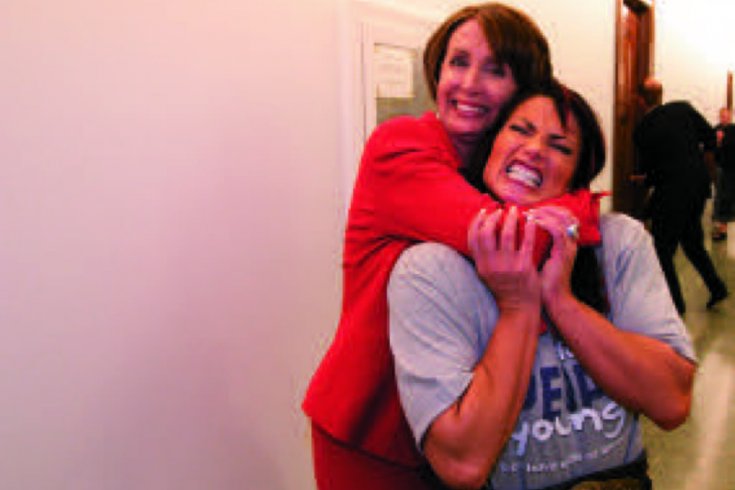 stamford, connecticut—At July’s Democratic National Convention, among the motley crew of talk-show pundits and political junkies, an unlikely figure could be spotted. A professional wrestler named Chris Nowinski was in attendance, and he had his own advice for the presidential candidate John Kerry. “Kerry has to take it to emotional highs and lows,” says Nowinski. “If he gets fired up but then brings it down, it’s a roller coaster.

He needs to ride that roller coaster.”Nowinski ought to know how to work up a crowd. As one of the performers with World Wrestling Entertainment — formerly known as the wwf, and still remembered for bringing a leotard-clad Hulk Hogan to millions of teens and preteens — Nowinski’s stock-in-trade is connecting with Americans on a visceral level. As Nowinski points out, “There’s an absolute similarity in the showmanship between politics and wrestling. The difference is, wrestling does it better.”

From the wwe’s headquarters in Connecticut, Gary Davis is trying to use that advantage to make a difference. A vice-president at wwe, the soft-spoken Davis is the driving force behind something called Smackdown Your Vote!, a project that uses wwe’s super-sized media profile to preach the virtues of voting to a demographic the mainstream media has a hard time reaching — namely, your average wrestling fan. Smackdown Your Vote! just may be the last best hope for a country in which just one third of eighteen- to twenty-four-year-olds bothered to vote in the last presidential election.

The wwe is just one of many corporations to flex its civic muscles this year. The entertainment giant Sony is sponsoring the Hip-Hop Summit Action Network, which holds forums that are headlined by rap stars to encourage urban youth to get involved in politics. The cellular phone manufacturer Motorola is helping MTV’s Rock the Vote send political text messages to young voters. By bankrolling efforts to get out the youth vote, companies can don a halo of civic responsibility, while simultaneously building brand recognition among a young demographic that is becoming increasingly impervious to traditional advertising. It is, in many ways, a match made in marketing heaven.

For wwe, there are very clear attractions to getting involved. When the company went public in 1999, it recognized the need to convince shareholders it was giving back to the community—what Davis calls the “warm and fuzzy” feeling. By championing the cause of young voters, Davis hoped not only to provide that added value to stockholders, but also to establish a corporate image for the company that was distinct from its unabashedly puerile programming. “People were taking our product and saying, ‘That’s the company,’ ” says Davis, “as if we come to work and slam each other with chairs.”

By sending his wrestlers to speak with youth around the country, as well as having voter-registration desks at wwe events, Davis hopes Smackdown Your Vote! can bring an additional two million young voters to the polls on November 2. In this, Davis has a surprising ally in Kay Maxwell, president of the League of Women Voters, a crucial partner in the project. The League joined forces with wwe in early 2003, providing the know-how on the ground to match wwe’s media profile. Its network of volunteers staffs wwe’s voter- registration desks and hosts its wrestlers at their talks across the country.

With its penchant for progressive causes, extending back to its suffragist roots, the League seems an unlikely partner for wwe. The League’s record was described by one of its former presidents as “pricking the conscience of our public life.” The very sight of Maxwell, a demure-looking woman in her sixties, at the wwe headquarters here in Stamford seems incongruous. This is, after all, a company whose wrestling events have featured women in bikinis performing sexually suggestive acts with cream pies. The League brings Smackdown Your Vote! a credibility that might otherwise be lacking. Its involvement, admits Davis, “makes a big difference in terms of how seriously people take what we’re doing.

“If Maxwell recognizes the contradiction embodied by the partnership, she doesn’t admit it. “Groups don’t have to come together and buy into everything the other does,” Maxwell explains during the meeting with Davis and me. “A few people have raised concerns. But our partnership is not meant to be a comment one way or the other.” At this point, Davis jumps in. “American democracy is inclusive, and this is a very inclusive partnership,” he argues. “Why can’t guys with green hair and women with blue hair be together?

“After the meeting, waiting for the elevator, the three of us face a wall of televisions. “Diva Search” is playing, a televised contest featuring scantily clad women; the winner gets $250,000 and the chance to be a wwe pin-up girl. On the screen, a contestant has collapsed into a fit of giggles. Her image bounces up and down across a dozen oversized television screens, in perfect silicon-enhanced unison. Davis and Maxwell watch the screens uncomfortably, as the seconds tick by in silence.

In the end, the only measure of the effectiveness of this odd partnership is whether it makes a difference. Davis thinks it already has. His favourite story is about a woman in Pennsylvania who heard on the radio that wwe would feature voter-registration desks at its events. The woman drove her sons nearly an hour from their home to a wwe wrestling match, registered them, then promptly turned around and drove them home again. She wasn’t a wrestling fan. She simply didn’t know how else to register her sons to vote.

Davis recognizes the tale cuts both ways. “Those stories show how our program is helping to make a difference,” he notes proudly. “But it’s also a sad state of affairs when a television program about professional wrestling is providing the major civic lessons to Americans.”

Money for Nothing, a Reno For Free