Pigs in the City | The Walrus
Skip to content 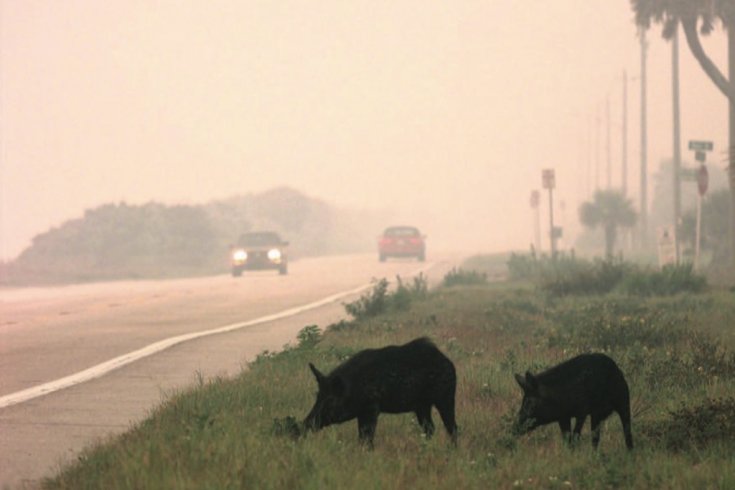 berlin—Derk Ehlert has that whimsical quality of movement whereby his torso seems to chase after his neck, which is thick and tilted at forty-five degrees then handsomely chiseled through his jaw to the end of the nostrils, which twitch curiously as the breeze shifts. It’s impossible not to imagine him on all fours, charging across the cobblestone – neck swivelling left and right through traffic – and, off the sidewalk, onto damp grass and into the trees. Where the undergrowth abruptly disappears, his stride drops to a bent-knee tiptoe. He crouches over a dent in the earth and picks up a handful of dirt. “They were here,” he whispers, sifting half-eaten roots and acorn shells through his fingers. “This is where the wildschwein lay last night.”

The “they” in question, and the creatures he has been stalking for the past hour, are wild boars. Somewhere between five thousand and seven thousand now live among the 3.4 million human denizens in Berlin, and Ehlert is the man who facilitates the relationship between the two species. In his capacity as Jagdreferent [hunt adviser] des Landes Berlin, he commands the city’s network of fifty volunteer hunters, who are charged with regulating the city’s boar population. Ehlert’s team killed five hundred of the creatures last year and will likely do the same this year as part of the ongoing facilitation. Hours earlier, Ehlert arrived at a street near Olympic Stadium just as a thirty-year-old man threw himself in front of one of the marksmen, shrieking “You don’t shoot my pig!” The boar weighed 230 pounds, possessed five-inch tusks, and was known as “the traffic pig” for the way it would cross a street – always between cars – where hunters can’t shoot. Despite his job (or perhaps because of it), the Jagdreferent has developed a soft spot for the very population he is supposed to control. Those boars that have adapted most completely to Berlin impress Ehlert the most and, thus, get names. As we close in on “Sophie,” he is still sad about signing off on the order to shoot the “traffic pig.”

“What’s happening doesn’t make evolutionary sense,” he says through our translator. Autumn is when mating customarily hits stride for the Middle European Wild Boar (Sus scrofa scrofa), but as Germany’s once-divided capital marks its fifteenth year of reunification next month, the habits of these urban animals have gone haywire. “It used to be they were born in February or March and would be fertile a year later. Now it’s November of the same year.” When the wall that separated West Berlin from the surrounding forests fell, a historic migration passage opened. That change, combined with the withdrawal of occupying allied forces (American troops were especially avid hunters) and, more recently, a wave of abnormally warm summers, is believed to have triggered the reproductive mutations (and other odd developments as well). The urban boar population went from a timid, manageable estimated three thousand in 1989 to the current numbers.

Not just the boars’ numbers, but their physical appearance and behaviours have changed. By day, they roam the outer neighbourhoods in “sounders” of up to seven, then follow Berlin’s star-shaped system of parks and abandoned factories into the city at night in search of food, where they form groups that often exceed a hundred. These boars actively seek out human habitats – a third have never even been to a forest. Committed omnivores, they’re more prone to strike gardens or the family dog than they are humans, unless you stumble between a Bachen and her Frischlinges. Females bite, males attack with tusks. They’ve devoured jagged strips through parks across Berlin. Last year, they caused more than four hundred traffic accidents in the city, some of them fatal. “If you hit a pig at a hundred kilometres an hour, you’re pretty much dead,” says the Jagdreferent.

The network of fifty private hunters, who dress as “civilians” and whose arsenal ranges from rifles to hand guns to knives, receive more than three thousand phone calls a year via a twenty-four-hour hotline. An unusually high proportion of the volunteers are drawn from the ranks of veterinarians and police. They must be hunters of extraordinary skill: “If you shoot an animal without killing it, it will be a ticking bomb running amok in the city.”

Only when it becomes an active threat to the human population will a pig be shot. The hunters don’t like to shoot in cemeteries or near historic sites. They don’t like to shoot in front of schools, and in such cases will use tranquillizing darts first, and bullets after. They also don’t like to shoot boars in heat because the hormones give the meat – the one tangible benefit to being an unpaid urban-boar hunter – a gamey taste. As a bonus, the hunters are also given the meat from the “run-over” boars – the victims of the traffic accidents.

“People say, ‘Why don’t you relocate them to the forest?’ But these are city animals. They’ll always come back to the city.” Ehlert, who is thirty-six and was born and raised in West Berlin, smiles as he says this. Earlier he’d joked that Paris had the Eiffel Tower and Berlin the wildschwein. But now his shoulders square and he speaks earnestly: “We should be proud they choose the city.”

Here’s something interesting: Ehlert is not actually a hunter. His background is in ornithology, and he doesn’t have a licence to hunt. Nor does he especially like the idea of hunting. This fact sits rather badly with many of the hunters. He hates seeing boars shot but watches as many of the kills as he can. “So I don’t make the decision to kill lightly,” he explains.

We reach the clearing. Between two clumps of oak is one of those Berlin playgrounds that look like an ikea display. The Jagdreferent has made us pledge not to divulge which neighbourhood we are in – lest we further stoke the phenomenon he calls “pig tourism.” Closer to the street is a basketball court. Then a bus stop. A plane passes overhead. He suddenly puts a finger to his lips, then twists slowly towards the bushes. He is squinting slightly.

The scent is vague, smoky at first, then hints towards hot water poured over Ichiban noodles. It’s charged with a sweetness. “Sophie’s looking for a man – you can smell her!” A few steps behind Sophie are two impossibly delicate creatures with faint yellow stripes on their backs. “Her little ones.” A line of children pass silently on small bicycles.

“People in this neighbourhood know how to live with pigs,” he says proudly, and it’s hard to tell if he’s proud of the people or of Sophie, not even a year old. He has momentarily forgotten the traffic pig. “There are very few animals that react so well to new situations – that can adapt. A lot of people use ‘pig’ as an insult. I’ve learned it’s an honour to be called a pig.”