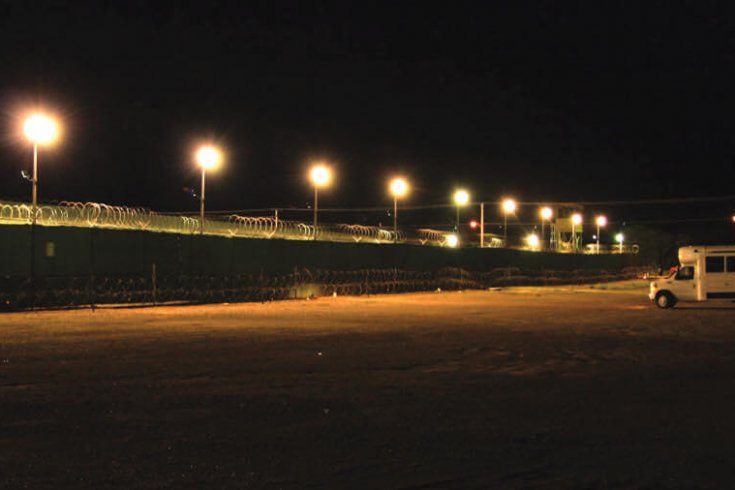 Outside the gates at Guantanamo Bay / Photograph by Eric Foss

guantanamo bay––At six o’clock every weekday morning, five old men walk in through a gate that marks a strange frontier; late every weekday afternoon they go back. They are the only ones allowed to make this passage. The guards call them “the commuters.”

Their crossing point is the northeast gate of the Guantanamo naval base in south-eastern Cuba. They pass underneath a wooden guard tower and through a chain-link fence crowned with coils of razor wire. On the American-controlled side there is a hut made of concrete blocks painted white; on the Cuban-controlled side, a strange, small, officious-looking structure, once a currency exchange, now caught in the freeze of bi-national relations, has fossilized into a guard hut. High sun, bare hills, quiet.

When the two governments broke off relations over four decades ago, people who lived on the Cuban side and worked on the American side were allowed to continue, but nobody was permitted to replace them. There were more than two thousand commuters then, passing through the northeast gate each morning to work in the laundries and the mess halls. Now there are five.

No pase, says the sign on the American side, facing the Cuban soldiers. Republica de Cuba, Territorio Libre de America, says the sign on the Cuban side, facing the U.S. soldiers. Some set decorator has laid a scrap of squashed hutia, or banana rat, picked over by turkey buzzards, on the crumbling road; that would be the opening image of a film about this eerie time-warped survivor of the Cold War, a shabby tropical Checkpoint Charlie set in a working minefield.

“Castro built a facility on top of that little mountain over there,” says the sergeant in charge of the media tour, “so he could watch the Marines do their training. He loved to do that.”

Maybe he still visits from time to time. If he does, he’s seen the American base grow and shrink and grow again, evolve from a refuelling station and surveillance point to a base for anti-drug operations to a detention centre for thousands of Haitian and Cuban aliens trying to reach the United States. Now it is the central prison and interrogation centre for the men held by the Coalition of the Willing.

They are never called prisoners. The Americans who guard them always refer to them as “detainees.” There are more than six hundred of them, from more than forty countries. They were detained, the Americans say, on the field of battle “in the Afghanistan theatre” and flown here to be interviewed until their usefulness to the interrogators is considered at an end.

The Cubans, of course, have no say in any of this. The Cuban government has formal sovereignty over Guantanamo naval base but does not control it and cannot enter it. For a century the base has been leased by the U.S. government under an arrangement that can be cancelled only by mutual consent. The result is an odd tangle of international and Cuban law that produces a place free of American law, and perhaps of any law at all. Although American officials at the base say that they are operating “in the spirit of the Geneva convention,” the fact is that the detainees – Afghans, Pakistanis, English, Australians, and even one young Canadian – live there under guard beneath tropical skies without charges having been laid, without access to lawyers, and with no assurance of freedom soon, or later, or maybe ever.

Resort developers, perhaps those with experience in budget destinations, would look at Guantanamo Bay with wistfulness. There are pleasant barracks and athletic facilities for the more than twenty-two hundred American military personnel, fine and uncrowded beaches, a McDonald’s, a Kentucky Fried Chicken outlet, and iguanas on the promontories overlooking the ocean, scrambling elbows-out, heads-up, tails flailing over the bristly grass. There is a golf course. An outdoor movie theatre. The diving is excellent. There is the Bayview Club for gourmet dining and many large-scale mess halls for all ranks.

There are sights to see as well. Camp X-Ray, with its open lines of cages that once housed the rebellious among the illegal migrants, then the first wave of illegal combatants in 2002, is locked and empty now.

“No pictures, no photography, none,” says Specialist Meyer, as she fits a key into a padlock.

“But you’re not using this facility now,” says the man from Die Zeit.

The cages are oddly lovely, over-grown with dead vines; each is about three paces by four, meant for two men. There is a plywood roof over each double row of cages, scraps of plastic sheeting hung from the juncture of the plywood and the mesh, and a slanting pipe running between the cages with a bulbous metal cup at groin level. A banana rat, a kind of modified beaver the size of a housecat, with a rat’s tail, tiptoes along the top of a fence and stops, shocked, at the sight of the man from Die Zeit.

It is as empty a place as I have ever seen. The cages are stripped and swept, even of litter. There are tan banana-rat droppings the size of pencil erasers in clumps on the dirt, and nothing else. A four-inch strand of plastic lies half-hidden at the foot of a cell, with a square nub where it once closed in a cuff – temporary shackles, cut and thrown away.

Prisoners in maximum security are kept in individual cells in a newer facility dubbed Camp Delta. They are able to speak with their neighbours but freed only for occasional exercise or for interviews with intelligence officers. Reporters never see them. Inmates in Delta’s Camp Four medium-security unit live in dormitories and can talk with each other and the guards. Reporters are allowed a quick look: balding, brown-skinned, bearded men in white robes, strolling behind the wire. It is hard to think what you could do with Camp Delta when the global war on terror ends and the resort planners come in. Perhaps young people from Third World nations could be flown in for a week’s introduction to the culture of the west, with a night in a Camp Delta cage as a taste of the future for a failed terrorist.

The base commander, Captain Les McCoy, has a glorious leather-and-mahogany office overlooking Guantanamo Bay. He’s a startlingly fit-looking, black Navy pilot in a blinding white uniform. He’s fond of the word “surreal,” and uses it especially in talking about the old men who commute every day from Cuba.

“Used to be, when one retired, he and his friends would shove all the stuff he was taking back home from the base over the fence, and then on the other side he’d have to get people to help haul it up the hill on foot. Then one man died of a heart attack doing that, the day he ended work. The Cubans send a truck now. The old men would like to retire now, but they can’t – they have to take the pension cheques back for another hundred retired workers over there. We haven’t figured out any other way to get their pensions to them. So these old men still have to get up at three, four o’clock in the morning. Some have been working here fifty years.”

“Could we get a picture of the old men coming across the border?”

Outside, the turkey buzzards fly in clichéd circles and the Coast Guard boats roar over the bay, their machine guns aimed up at the low mountains and the Republica beyond.