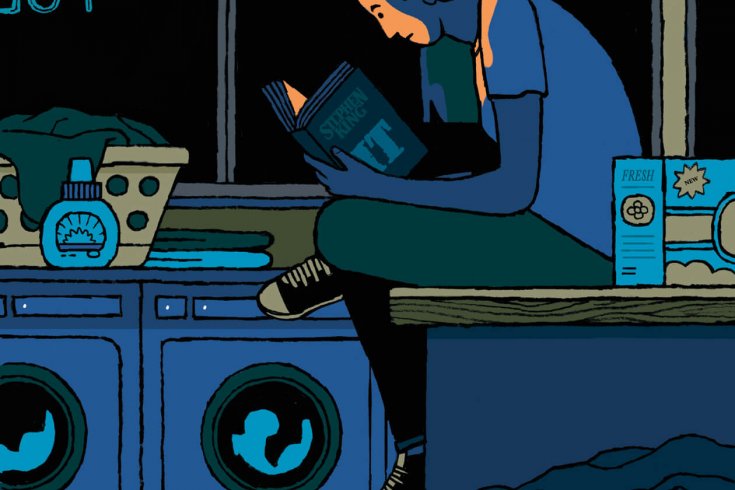 In Stephen King’s 1982 novella The Body, twelve-year-old Chris Chambers reveals to his best friend, Gordie Lachance, what happened when he returned the class milk money he stole. The teacher he came clean to, “old lady Simons,” pocketed the nearly seven dollars, bought a new skirt, and let Chambers take the fall. The story is set in King’s frequently used fictional town, Castle Rock, during the summer of 1960. Chambers, who dreams of escaping the drink-soaked life of hard labour that awaits him after graduation, says that Simons was free to do what she did only because his family was poor. “Do you think that bitch would have dared try something like that if it had been one of those dootchbags from up on The View that had taken the money?”

It’s a blunt assessment of the class struggle that not only shapes King’s fiction—from small-town terrors to apocalyptic epics—but saves his strangest works from being purely escapist. Carrie, the bullied telekinetic girl who made King’s fortune, has a mother who toils on the speed ironer and folder at the Blue Ribbon Laundry, then comes home to take out her rage on her daughter. In Cujo (1981), a rabid dog traps a woman and a boy in a stalling Ford Pinto after her husband embarks on a desperate business trip to save his ad agency and prevent the collapse of the family finances. The time portal in 11/22/63 (2011) is accidently discovered by a diner owner, who, at first, uses it to save money by visiting 1958 to buy ground beef at 54 cents a pound.

“He knows fear,” detective writer Walter Mosley said about King in 2003, “and not the fear of demonic forces alone but also of loneliness and poverty, of hunger and the unknown.” That fear has been at the centre of King’s writing since he was a broke schoolteacher in Maine. For the last four decades, America’s best-known horror writer has also been one of the country’s most brilliant social realists.

Set in an unnamed post-recession Midwestern city, King’s new book, End of Watch, concludes a trilogy about retired private eye Bill Hodges and the Mercedes Killer—so-named because he killed eight people by plowing a stolen Mercedes through a pre-dawn lineup at a job fair. Before carrying out this massacre, Brady Hartsfield had been a frustrated tech prodigy cursed with bad timing. He thinks his pre-Siri voice-activated program should have made him rich. But instead, he was left “a day late and a dollar short. Or, in this case, a few billion.”

Stuck working dead-end jobs at an electronics shop and an ice-cream truck, Hartsfield turns to mass murder as a way of making his mark on history. Or that’s what he tells himself. “The truth is darkness,” he thinks, “and the only thing that matters is making a statement before one enters it. Cutting the skin of the world and leaving a scar. That’s all history is, after all: scar tissue.” But while his lack of money and status feeds Hartsfield’s need for glory, his rage also draws on another source: racism.

King has addressed race before in the small-town backdrops of his novels; however, he has rarely married the theme with the idea of class. For the most part, he depicts the discontent of certain kinds of struggling white figures: electricians, gas-station attendants, factory workers. End of Watch makes it clear that King’s vision of America’s economic decline includes the reality of racial intolerance and the rise of troubled loners such as Dylann Roof, who is accused of having killed nine African Americans during a Bible study in South Carolina, in 2015.

Hartsfield constantly refers to Hodges’s black sidekick, Jerome Robinson, as the “nigger lawnboy” and, throughout the first novel, obsesses over the Robinson family’s upper-middle-class status. Jerome’s chartered-accountant mother and college-professor father exemplify a truth the killer can’t admit: while class jumping is hard, it’s not impossible. Two of King’s most famous writer-protagonists, Bill Denbrough in It (1986) and Paul Sheldon in Misery (1987), manage to climb the social ladder through a mix of talent, luck, and doggedness. The real barrier holding Hartsfield back, in other words, is his own sense of entitlement. (He’s also criminally insane, which doesn’t help.)

The killer turns up in End of Watch in the same place we left him in the previous volume: at a brain-injury clinic, in a near-vegetative state. Hartsfield took a bad blow to the head when Hodges and his investigative team thwarted his plans to bomb a boy-band concert that Jerome’s mother and little sister were scheduled to attend. Confined to his bed, Hartsfield’s paralyzed state reflects the frustration of an angry young man who blames society for what he’s become.

His grey matter is regenerating, however, and the telekinetic abilities that were budding in Finders Keepers (2015), the trilogy’s second book, strengthen. Able to control objects and minds, Hartsfield plots to have a better life—and maybe finally force the world to notice him—by taking over a body more suited to his genius, with a bankroll to match.

K ing’s childhood in Connecticut and Maine was something of a blend of the lives he created for Lachance and Chambers in The Body. Like Lachance, King had a talent for storytelling. Like Chambers, he grew up without much money. King’s mother raised her two sons alone in the 1950s by taking on a series of low-paying jobs: shifts in a bakery and an industrial laundry, and housekeeping at a facility for the mentally ill. The strong women who populate King’s work—Wendy Torrance in The Shining (1977), a far cry from the trembling Shelley Duvall in the movie, and hardworking housekeeper Dolores Claiborne—reflect King’s admiration for his own mother’s efforts to get her boys a college education.

The stakes were high. In 1966, when King was in his last year of high school, the Vietnam war machine was at full throttle. Not being admitted into college would have meant getting drafted. To help with tuition, King got a job at a mill, a place he later described as “a dingy fuckhole overhanging the polluted Androscoggin River like a workhouse in a Charles Dickens novel.” Every day after school, he punched in for an eight-hour shift, went home to sleep for several hours, attended classes, then punched in again. His first notable story sale, in 1970, to a men’s magazine called Cavalier, was about the enormous rats under the mill. The grimy horror tale, “Graveyard Shift,” landed him the equivalent of a few weeks’ pay.

By the time he’d been out of college for a couple of years, King was married with two kids. His wife, Tabitha, was doing the evening shift at a Dunkin’ Donuts, while he pumped gas at a filling station and—like his mother—pressed sheets in an industrial laundry. Respite came in the form of a job as a high-school teacher, for which King was paid $6,400 a year. However, this was still not nearly enough to fix his Buick, move the family out of their double-wide trailer, or even purchase a phone. The sale of paperback rights for his first novel, Carrie (1974), changed all that. The $200,000 payday allowed King to quit his teaching post and devote himself to writing.

Few of King’s characters catch such a break. In The Shining, failed writer and alcoholic Jack Torrance has been fired from a Vermont prep school after hitting one of his students. He accepts an off-season position maintaining the Overlook Hotel, believing he can dry out and use the downtime to complete his book. Instead, he succumbs to the ghosts haunting the Overlook and lays siege to his family. Evil spirits are, in large part, responsible for Jack’s rampage, but it’s his “unraveling finances” that force Wendy Torrance and her son to stay in the hotel with a man who is clearly coming apart. The abject shame of turning to her smug mother for a handout scares Wendy as much as her deranged husband does.

King isn’t a moralizer. Bad things happen to good people in his fiction, like the unemployed victims killed by Hartsfield’s deadly joyride. But King’s best books also celebrate the ennobling nature of industriousness. In The Stand (1978), a deadly flu wipes out society. The survivors from rich, comfortable backgrounds don’t make it far: they wear the wrong shoes, can’t give up their pills, and eventually die. The factory workers, the farm-raised, the children of working, single-parent families? King sees them through to the end.

Hodges, a tireless investigator, is one of the “saved.” His selflessness makes him the ideal nemesis for the scheming Hartsfield, who attempts to reinvent himself through heinous acts. In a particularly contemptuous class-charged attack, the killer enters the head of Jerome’s teenaged sister, Barbara, and preys on her fears that her family’s money has made her inauthentic, or “blackish”—“She can live that wonderful white life because she is a threat to no one,” intones the voice in her head. Hartsfield believes that the financial comforts that fate has withheld from him should also be withheld from anyone lower down on his imagined social ladder. Blackness and privilege are, for him, incompatible.

Hartsfield’s gambit against Barbara fails, giving Hodges the major lead he needs. But Hartsfield’s undoing ultimately stems from his refusal to grasp the reason for the Robinson family’s success: their unwillingness to buckle under the weight of circumstance. A committed relationship to honest work often is what helps King’s characters escape their origins. The author’s clear-eyed depiction of that struggle—in books that also happen to feature werewolves, vampires, and aliens—has made him one of our premier storytellers.

Naben Ruthnum (@NabenRuthnum) is a Journey Prize-winning author and a former books columnist for the National Post.
Josh Holinaty

Josh Holinaty (@joshholinaty) counts Wired, The New Republic, and the Globe and Mail among his clients.