Wood Is the New Steel | The Walrus
Skip to content 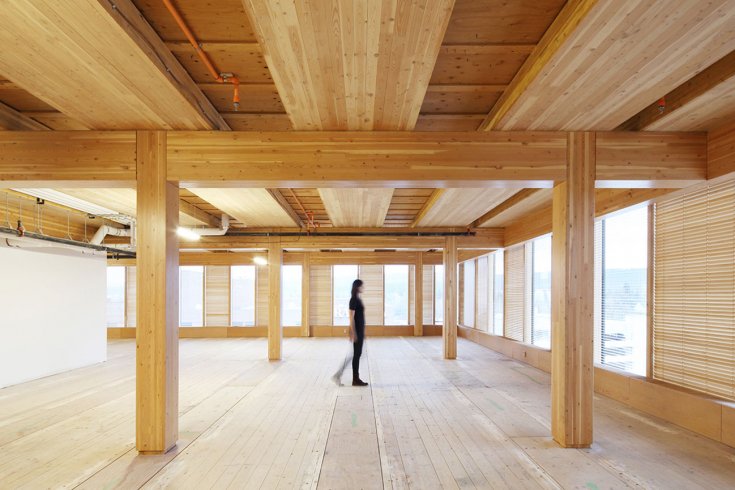 In Okanagan Falls, BC, between a leafy vineyard and a former sawmill, stands the newly expanded factory of Structurlam Wood Products. In preparation for North America’s next building boom, the plant has been transformed into a state-of-the-art factory for making glulam and cross-laminated timber (CLT), the materials that make timber-frame high-rises a viable building option.

Outside the main entrance, Structurlam president Bill Downing is surveying the Douglas fir glulam stacked on flatbed trucks, which await transfer to the finishing plant twenty kilometres north in Penticton. The wood arrived at his plant in slender boards and is leaving as strapping mass-timber beams. Structurlam now ships its products around the world, from Taiwan to Toronto; the company manufactured the sweeping arches of Frank Gehry’s Art Gallery of Ontario transformation. But arguably its most high-profile client is the six-storey Wood Innovation and Design Centre in Prince George, currently the tallest timber-frame building in North America. “We’re doing way more than we ever used to do,” says Downing.

The temperature inside the CLT plant is warm and slightly humid, carefully monitored to prevent wood from cracking and the laminating adhesives from drying too quickly. The transformation of slender two-by-six pieces into wall-sized panels begins with the spruce, pine, and fir boards getting finger-jointed: their edges sawtooth-cut and then glued end-to-end to create a smaller number of extra-long boards that will form the board-thick first layer of the CLT. The long ribbons of wood are then suction-loaded from a roller table into a hydraulic press. An enormous network of European-made machinery ingests and positions the boards. A coat of laminating adhesive is slathered over the exposed surfaces, and then another layer of boards is placed crosswise to the first layer, which gives the panel its incredible load-bearing strength. There might be as few as three layers, or as many as nine. Eventually, the network of machines disgorges a single massive layer-cake of wood, with glue oozing out like pancake batter between the layers. “The whole panel has to go into the cold-press within twenty minutes after the first drop of glue is applied,” says Downing. “If it takes one minute longer than that, it’s junked.”

The panel is then precisely drilled and cut by a Germany-made Hundegger machine, which reads the computer-aided design (CAD) renderings created by a team at Structurlam. Because of the composite structure of mass timber, precise detailing is not merely aesthetic, but crucial to the seamless assembly of a building.

Most CLT panels are cut to forty feet long by eight-and-a-half feet wide by sixteen inches deep, to suit their roles as floors, ceilings, or supporting walls.Downing strolls past a stack of huge slabs of freshly made CLT. “These big jesus-thick panels would probably be for a roof,” he says. The sheer scale is eye-popping, visually persuasive evidence that we could soon be building thirty or sixty storeys in wood—perhaps someday even another CN Tower from strategically engineered spruce, pine, and fir.

“If you really wanted to, you could make an 800-foot-long piece of wood,” says Downing. “The biggest we ever made was 110-feet long and eight-and-a-half-feet wide.” (It weighed 35,000 pounds.) “Size matters, but what’s more important is that we’re basically prefabricating these structures that we can ship anywhere in the world, like a kit of parts. Now, that’s amazing.”