With a Light Steam | The Walrus
Skip to content 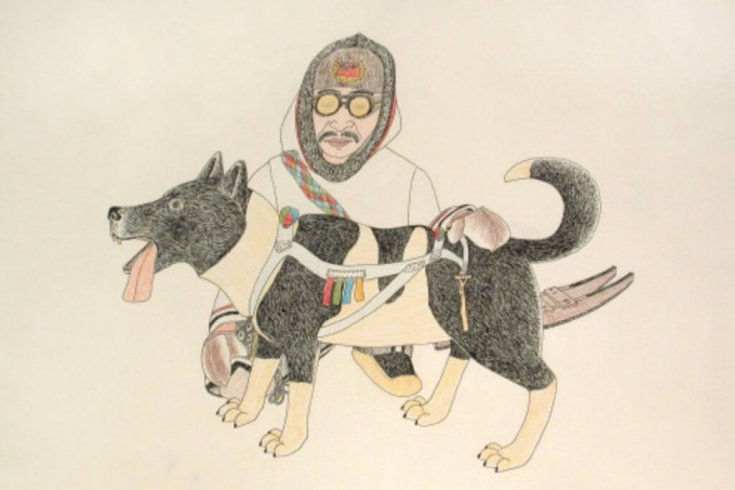 Inscription: our fathers had beautiful clothing in the past and the dogs were much more appealingUntitled(1998) by Kananginak Pootoogook

St. Petersburg—“Prepare to suffer,” Igor says. Wearing only sheets and rented plastic slippers, we enter the parilka and sit on the highest bench, where the steam is most aggressive. Igor shouts to the guy with the kovshek, a giant ladel. “Dabavim!” Throw more water on the rocks. The guy throws. “Dabavim, dabavim!”

A wall of hundred-degree vapour wafts across the small room, searing my sinuses like a hit of wasabi. “It’s a good steam,” Igor says, rising to leave. “Now we begin. Find a place and lie down right away. Soon, I will come.” I drape my sheet across the bench, but I’m not quick enough to lie down before it’s scalding hot.

Igor reappears wielding birch branches, one in each hand, the leaves dripping with water and eucalyptus oil. His sheet is bunched around his waist, and he is wearing mittens and a felt Red Army hat with flaps covering his ears. Igor, as the name implies, is a hulk of a dude: six-foot-two and built like one of boxing’s Klitschko brothers. The homoeroticism of the moment is unmistakable, but in the banya (bathhouse), this is a matter of course.

I cover my dick.

He whips the branches in the air over my body, gathering heat in the leaves. Then he lashes and smacks every inch of me, pausing only to push the leaves into my face for a breath of eucalyptus and to poke my heels with the branches. This goes on for about fifteen excruciating minutes, until the leaves, now dry and crisp, start to burn my skin. “Enough,” Igor declares.

Red and puffy, we hurry out of the parilka. We hang our sheets and dive into a freezing cold pool filled with greenish, leaf-strewn water. Three naked girls are soaking up to their necks. We’re almost too light-headed to notice.

I’ve been coming to banyas like this one on Karbisheva Street for the past eight summers. Before I met Igor, all I knew of the ritual came from Mikhail Zoshchenko’s famous story “Banya.” That piece, a satire of Soviet bureaucracy in which bathers are required to retain tickets for coats and linens on their naked persons, does not depict the theatre of pain inflicted by Igor. This theatre goes back to at least AD 1113, when the apostle Andreas recorded a swipe at the Slavs and their banya:

“They warm it to extreme heat, then undress, and after anointing themselves with tallow, take young reeds and lash their bodies. They actually lash themselves so violently that they barely escape alive. Then they drench themselves with cold water, and thus are revived. They think nothing of doing this every day and actually inflict such voluntary torture upon themselves. They make of the act not a mere washing but a veritable torment.”

Lashing aside, the banya is primarily a place to talk and hang out. Igor and I retreat to a booth we’ve rented for a few hours. Seated at a picnic table, we ask the attendant for two foamy glasses of kvas, a traditional malted black-bread soda the colour of cola. Igor has also purchased vobla (a whole dried fish) and several packages of kalmar (squid jerky). I sip the kvas and chew a few strings of the squid jerky, which is like salted rubber bands.

We talk about the Winter Olympics, which Russia will host in 2014. “Someone will get a lot of money,” Igor says, “and we will be in deep shit. It’s the usual thing.” We talk about women: “The girls here don’t understand that I am alive. I am not a slot machine. They only understand how to take.” And since Igor is having some issues right now, we talk more about women: “I am trying to figure out whether she is the shadow or I am.” He tears the vobla in half and removes its liver, about the size and colour of a golden raisin.

“Eat,” he says, handing it to me. I pop it in my mouth and swallow with more kvas.

A story about a friendship between two men developing over ritualized nude violence has certain overtones, I realize, but this is how Russian men—and, I can only assume, women—bond. As for me, a Westerner, I have noticed that it can be much easier to develop trust with someone you have no hope of fully understanding than with someone from your own culture. I’ve gotten to know Igor mostly in this place.

He is twenty-seven. He took English in school but has refined his language skills working in Petersburg bars frequented by foreigners and prostitutes for the past eight years. I have personally witnessed him chugging 200 grams of vodka, four shots in one. There is not a single friend back home whom I would allow to beat my naked body with birch branches in a wooden steam room.

I ask Igor what banya means to him. “It’s cool, man,” he says. “Just relaxing.” Then he thinks for a moment and asks if I feel the rebirth.

Igor orders a shot of vodka and offers me one. I decline and call him out: he once told me that whatever I do, I should never drink vodka in the banya. A good friend of his died after passing out inside the parilka. “This is not alcohol,” he says. “This is medicine. This is cure.”

“Don’t fuck my brain,” I reply, borrowing one of Igor’s favourite English expressions. I am already brutally hung over, something the banya is exceptionally good for.

He shoots the vodka and clanks the glass on the table. “We are now entering Heathrow Airport by jeep!” he exclaims.

We return to the parilka. By Igor’s standards, three cycles from steam room to pool are required to get the desired effect: skin spiderwebbed with blotches and a mental state of absolute relaxation in which you must struggle—I mean really try—to maintain consciousness.

We sit again on the highest bench. “That’s why people are coming in banya,” Igor says. “Probably they even doesn’t think about it. But somebody, for entertainment like with their friends, to drink some beer, to talk and stuff without the girls.…They still didn’t realize that their lives are beginning again.” He hops off the bench to splash more water on the rocks. “Probably it’s true.”

Jeff Parker is the author of Where Bears Roam the Streets: A Russian Journal, published by Harper Collins Canada in June 2014. His earlier works include a novel, The Ovenman, and the short story collection The Taste of Penny.

To Live and Die in Wales, Alaska