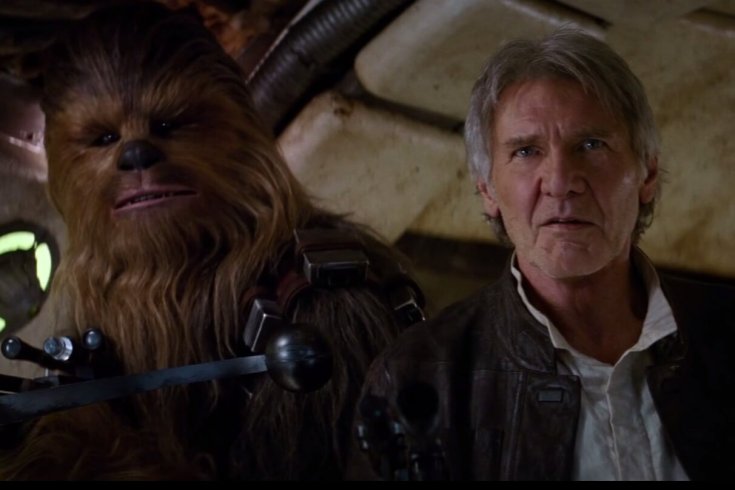 My imaginative life was shaped by the universe George Lucas created nearly four decades ago. Alas, when I watched the latest installment of the Star Wars franchise, The Force Awakens, I did not feel transported back to that galaxy far, far away. Instead, I felt very much where I was: in a suburban movie theatre, midway through life, with a big bag of popcorn in my lap.

But before I explain why the sequel didn’t arouse that rhapsodic sense of detachment from this terrestrial sphere, it bears explaining why the original did.

The release of Star Wars was one of the most significant events in the history of cinema. Not only did it win seven Academy Awards and smash box-office records, George Lucas’s 1977 space opera fundamentally changed popular culture. Darth Vader, C-3PO, R2-D2, the Millennium Falcon, and Princess Leia’s hairstyle remain recognized icons everywhere on the planet. Even minor characters—from Greedo the bounty hunter to X-Wing pilot Jek Porkins—are the subject of well-developed fan-con subcultures.

But, hard as it may be to imagine now, the film’s success was far from assured. In the 1960s, “space opera” was a term of abuse within elite sci-fi circles for hacky, formulaic, good-versus-evil tales of buccaneering space cowboys who save the world from aliens. As David Hartwell and Kathryn Cramer wrote in an influential 2003 essay on the subject, many of the emerging science fiction authors of the period were embarrassed by the lurid comic-book motifs, and sought instead to create speculative fiction “of the near future, inner space, and the human mind.” Unlike, say, Kurt Vonnegut, they were less concerned with transcending the genre than transforming it.

Groundbreaking special effects notwithstanding, Star Wars was not a transformative movie. Just the opposite. It was part of a counterrevolution waged by sci-fi nostalgists who were put off by the artistic pretensions of New Wave science fiction (think: Harlan Ellison, J.G. Ballard, John Brunner, and New Worlds under the editorship of Michael Moorcock). Had Lucas missed the crest of that reactionary wave by a year or two in either direction, it’s possible that Star Wars would have ended up as another forgotten specimen of intergalactic pulp.

In fact, Star Wars succeeded because it looked both forward and backward at the same time. Children like me (I was nine when I saw it) loved the tyoo tyoo tyoo of the futuristic laser fights, while our parents recognized the characters and plot as an adaptation of the Westerns (once derisively called “horse operas”) of their youth. As Forrest Wickman recently argued in Slate, Star Wars was a postmodern pastiche, drawing on everything from the Hindu concept of prana (the Force) to the bickering peasants in Akira Kurosawa’s The Hidden Fortress (R2-D2 and C-3PO).

And here we get to the root of why The Force Awakens didn’t do it for me. The movie abounds with sly references, winks, and nods to a thirty-eight-year-old film that was itself a mashup of sly references, winks, and nods to older films, novels, and comics. In other words: postmodernism layered on postmodernism. Harrison Ford’s 1977 interpretation of an intergalactic Huckleberry Finn was an act of genius. His 2015 interpretation of how his Huckleberry Finn interpretation would act in his early-bird-special years, on the other hand, feels more like an SNL sketch.

Worse, director J.J. Abrams’s references to the original Star Wars fritter away whatever dramatic tension occasionally develops. When Han Solo boards his old ship, the Millennium Falcon, the heroine Rey prods him to rehash his old boast about having “made the Kessel Run in less than twelve parsecs.” There was an opportunity here for subtle humour, had the reference to the earlier film been made in an en passante way. (As every nerd knows, a parsec is a unit of distance, not time, which is why the line stood out as a gaffe.) But the heavy-handedness of it took me out of the film.

Abrams’s nods work best when they are purely visual. I refer in particular to the haunting Planet of the Apes-esque image of the dagger-shaped Imperial Star Destroyer lying wrecked on the sands of Jakku, now serving as a playpen for scavengers (and, it turns out, daring pilots). There is also a nice scene where FN-2187, an escaped stormtrooper, unwittingly activates the holographic Dejarik tabletop game on board the Falcon. Both of these references work because they amount to little more than fleeting eye candy. The scenes between Solo and Rey, on the other hand, linger in the past for the sake of lingering in the past, making them feel less like an homage than internet fanfic on the big screen.

Three major characters are introduced in the film’s first act—none of them with any kind of well-developed back story. The First Order, the successor to the Galactic Empire, has become the locus of evil. Yet we learn nothing about its animating principles that isn’t just a rehash of old Darth Vaderism. A scene showing a First Order troop rally is presented like an unintentional parody of Leni Riefenstahl’s Triumph of The Will—with the presiding First Order general flanked by stormtroopers wearing massively oversized helmets that make them look like Rick Moranis’s heavy-breathing character in Spaceballs. Was this intentional? I have no idea.

I draw attention to these flaws to question not the talent of Abrams as a director but rather the enterprise itself. The challenge for any director tasked with creating a worthy Star Wars sequel—perhaps an insurmountable one—is that the space opera, like its horse and soap variants, demands a certain degree of non-ironic buy-in from the audience. The dum dum dum, dum-te-dum, dum-te-dum of the opening credits is the stuff of epic drama, not satire. But in this postmodern age of internet memes, the earnest homage is dead, its place in popular culture usurped by ironic self-referentialism. And we didn’t fall in love with Star Wars because it was trendy. We fell in love because it wasn’t.