Sunny Ways v. the Dark Side | The Walrus
Skip to content 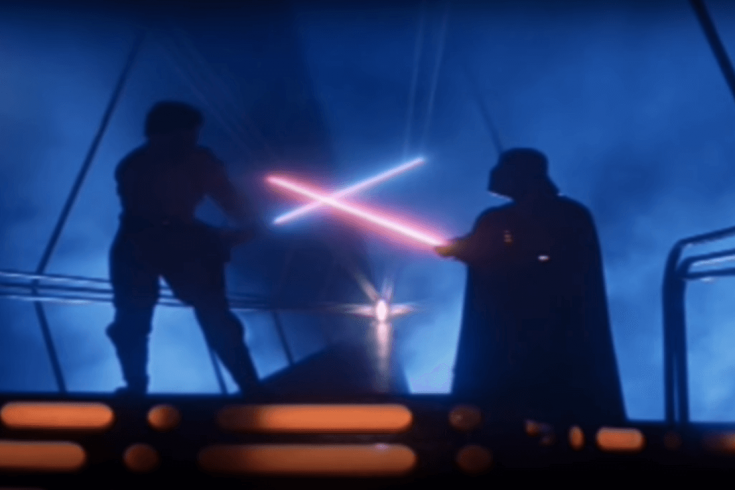 The year is 1983. Justin Trudeau exits an advanced screening of Return of the Jedi at the Somerset Theatre in Ottawa, father in tow. The prime minister looks bemused—perhaps he finds Ewoks and lightsabers a tad silly. Not so, Justin. The eleven-year-old offers his verdict to a CBC reporter with wide-eyed amazement: “It was better than The Empire Strikes Back and Star Wars.” A slight pause. “At least I think so.”

When footage of this long-time-ago, far-far-away scene found its way onto the internet earlier this month, it spawned an only partly tongue-in-cheek backlash in the voluble sci-fi geek zone of Twitter. As every true Star Wars fan knows, The Empire Strikes Back is the best movie in the first trilogy. It’s the one where Luke Skywalker first encounters Yoda, the ancient Jedi mage and master of the benevolent, universal energy known as the Force; it’s the one where Luke first learns that Darth Vader is his father (“No! That’s not true! That’s impossible!”); and it’s the one where Luke beheads Vader in a dank cave, only to remove the villain’s mask and see his own face. Gasp! Jungian psychology with a cudgel! Return of the Jedi, by comparison, is cutesy fluff.

The prime minister did not take his lumps lying down. He tweeted out a video, shot at Ottawa Comiccon last May, in which a Superman T-shirt-clad Trudeau geeks out over meeting Peter Mayhew—the seventy-one-year-old actor who played Chewbacca in five of the seven Star Wars films to date, including 2015’s record-smashing The Force Awakens—and asserts: “Empire is the best.” Big sigh of relief from strategic advisers in the PMO: crisis averted.

Some things change with time—your favourite Star Wars film is a good example—but some things stay the same. Thirty-two-odd years later, Trudeau again attended a VIP screening of a Star Wars film in Ottawa, only this time with twenty patients from the Children’s Hospital of Eastern Life. The next day, he allowed himself two instances during a town hall at the National Arts Centre to break away from affairs of state and give free reign to his rampant superfandom. “I was your age when I first saw Star Wars,” he told an eight-year-old audience member named Isaac. “And, like everyone of my generation—everyone I knew of my generation, anyway, maybe I just hung out with geeks—it was a life-changing movie.”

Trudeau is a self-confessed science-fiction geek. As a teenager, he clashed with his father over matters of literary taste. Pierre devoured the classics—Racine, Corneille, Shakespeare—and despaired his son’s admiration of Burroughs, Heinlein, Asimov, Tolkien, and King.

What’s interesting about Trudeau’s childhood favourites—aside from the fact that many of them now comfortably occupy the “Western canon”—is that their works share a common thread. Burroughs’s Tarzan of the Apes is the story of an aristocrat’s inborn nobility manifesting despite, or because of, his savage surroundings; Heinlein’s Stranger in a Strange Land is a tale of personal spiritual ascendance and transformation; Asimov’s The Foundation trilogy is a case study in political strategy and economics set against the backdrop of a galactic civilization in decline; and both Tolkien’s and King’s works seem at least as concerned with internal evil as the external variety.

In Star Wars, these themes are present in spades. And this is not coincidental. George Lucas was an early reader and admirer of Joseph Campbell, whose seminal work, The Hero with a Thousand Faces, expanded on Carl Jung’s theory that Western mythology is a series of retellings of the same proto-narrative.

In Campbell’s conception of this meta-story, a young hero is introduced, restless and unsure of his place in the world. By dint of a catalyzing event—known in modern screenwriting as the “inciting incident”—he is called to action. He (or she, in the case of The Hunger Games and a growing number of contemporary franchises) initially resists due to filial or other ties, but eventually, compelled by a sense of duty and a desire for adventure, leaps in. Along the way he encounters a mentor who provides training, equipment, or guidance. The hero travels to strange realms, meeting new foes and cementing new friendships. Somewhere along the way he dies, or appears to die, and is resurrected. He then returns to his homeland, victorious and transformed.

This is, of course, the story of Star Wars, not to mention the narrative spine in the mythologies of Jesus, Buddha, Mohammed, Moses, Joshua, King David, Osiris, Superman, Joan of Arc, King Arthur, and—dare I say?—Justin Trudeau.

Trudeau has offered little about his religious faith, except to say that he, like his father, is a devout Roman Catholic. But one need not possess Jungian insight to detect a certain connection between Canada’s prime minister and Western mythology’s meta-narrative. First there is Trudeau’s noble lineage, insofar as such a thing exists in this country. Then there is his character, complete with noble intent and noblesse oblige. And let’s not forget his personal story arc, a roundabout journey to the office his father occupied when—as his supporters would have it—Canada was a brighter place.

Trudeau alluded to this narrative of restoration throughout his campaign, casting himself as an optimist, a unifier, doing battle with the darker forces of cynicism, negativity, insularity, and decay. And upon victory, he went so far as to announce to the watching world: “Canada is back.” Sunny ways, anyone?

There may be no more to these parallels than meets the eye, of course. And if Trudeau really has styled himself after Luke Skywalker, he’s unlikely to admit it—at least not until he is an old man, authoring his memoirs and serving as Obi-Wan to Canada’s next Chosen One. But the story itself—whether we’re talking Jung’s meta-narrative in general or Star Wars in particular—may provide a useful framework for anticipating how Trudeau might grapple with the challenges that lay ahead.

To wit: Every leading character in every decent drama has an overriding fear. I consider it at least likely, given Trudeau’s pronouncements to date—about politics, his father, childhood, family, and life, as well as Star Wars—that his worst nightmare would be to become what he has always opposed: cynical and self-indulgent at the end, like Stephen Harper, Jean Chretien, and to an extent—shades of Vader—his own father.

Sith Lord, Pierre was not. He did, however, succumb to the dark pull of cynicism that so often enshrouds the Ottawa political scene. In his final year, the man who was ushered into office on a wave of ’60s optimism initiated a raft of tawdry patronage appointments (in turn providing Brian Mulroney with the means for his 1983 televised knockout of John Turner: “You had an option, sir!”).

The younger Trudeau’s challenge—his showdown with The Dark Side, if you will—is this: He has promised to transform so much in an environment where fundamental change is rare, if it happens at all. His resolve is about to be tested—is already being tested—in the crucible of power, which crushes men’s souls. The question is: Is Justin Trudeau Luke Skywalker or Darth Vader—or, Lord help us, the insufferable parvenu Kylo Ren?