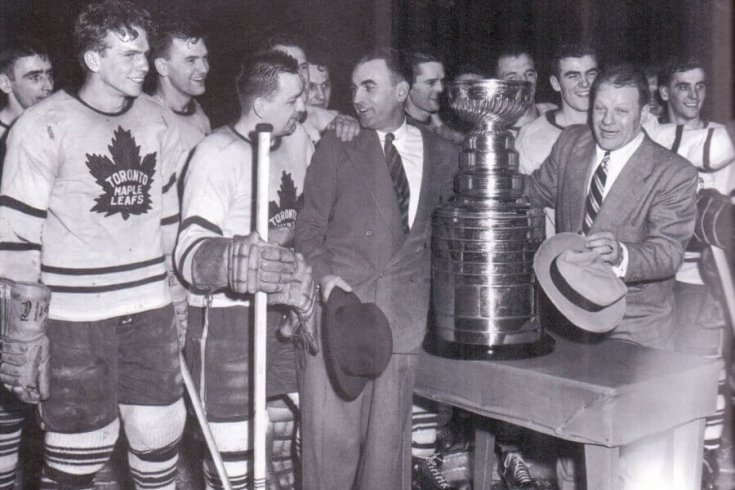 When the puck dropped in Boston on Thursday night, opening the Toronto Maple Leafs’ 2018 playoff run, the first six minutes of the game felt like déjà vu. The Bruins controlled the play, and they were focused, aggressive, and swarming in choreographed chaos. The Leafs, in contrast, seemed lost and panicked. When the first whistle finally blew four minutes in, Leafs coach Mike Babcock let out an anxious breath; the hectic start, he surely hoped, was only that.

Then, in the sixth minute, Boston gathered the puck near its net and, like fighter pilots in formation, the Bruins made their way toward the Leafs’ zone. They crissed and crossed down the ice, catching one defender in their wake and knocking him out of the play. The remaining Leafs were beaten by a crafty pass to All-Star and all-star pest Brad Marchand, who snuck the puck past goalie Frederik Andersen with a deft backhand. One–nothing Boston. Much of the next two hours of hockey followed the same pattern, as the Leafs lost 5–1. Then, on Saturday, they lost again: 7–3.

To fans of Toronto sports, it was all too familiar. The 2013 Leafs, led by maligned captain Dion Phaneuf and punchline sniper Phil Kessel, had ended a nine-year playoff drought, and their reward was a best-of-seven series against Boston, a perennial championship contender. After falling behind three games to one, the Leafs, assumed dead, took back-to-back games. In the final match, Toronto was relentless in its attack and diligent in the defensive zone. Goalie James Reimer had been brilliant for much of the series, and in playoff hockey, it always comes down to the goalie. The Leafs took a 4–1 lead late into the third period, and the once impossible felt inevitable.

It turned out that in the playoffs—especially in Toronto—there are no limits on the possible. Boston scored three times, with two of those goals arriving in the last ninety seconds of play. Then, six minutes into overtime, the Bruins’ Patrice Bergeron slipped a rebound past an outstretched Reimer, whose stick desperately reached for a puck it would never find. It was one of the most stunning routs in the history of hockey. For the Maple Leafs, though, it was just another in a long line of mythic collapses, to be recited as canon: 1994 in Vancouver, St. Louis in 2000. The past so weighs heavily on the franchise that former top executive Tim Leiweke once said he’d take photos of former Leafs teams off the walls of the Air Canada Centre. The NHL’s pre-eminent franchise has several things in abundance: money, fans, prestige. But, more than anything else, the Maple Leafs have ghosts.

To be a fan of the Leafs is to have a child’s optimism, unflinching in the face of relentless disappointment. Any diehard can rattle off a list of inexplicable moments: the high stick that the refs didn’t call on Gretzky in ’93, Gilmour’s long-anticipated return to the team in 2003, which was cut short (to a single period, in fact) due to an injury. The Leafs even stake claim to perhaps sports’ most believable ghost story, that of Bill Barilko, which was later immortalized by the Tragically Hip.

Most fans, faced with defeat after defeat, become jaded. Alex Wong recently wrote in The New Yorker about the particular paranoia of Toronto Raptors fans. When something goes right, a Raptors fan will be quick to remind you that it will soon turn horribly wrong. Leafs fans, though, despite not winning the cup since 1967, remain remarkably confident. They’re even in on the joke; when something seemingly insignificant goes well, a chorus can be heard across the city: plan the parade.

So, when former NHL All-Star Brendan Shanahan was hired by Leiweke in 2014 to oversee a massive reconstruction of the organization near the end of the Phaneuf era, Leaf fans met the news with trademark fervour. Shanahan had a mandate to remake the franchise, clearing the rot from the belly of the Air Canada Centre. He fired his general manager, most of the coaching staff, and nearly all of the team’s two dozen scouts. Instead of selling success, though, Shanahan’s executive team promised hard times. Babcock, Shanahan’s hand-picked head coach, warned fans in his introductory press conference, “if you don’t think there’s pain coming, there’s pain coming.” The response from diehards? Excitement. One fan tattooed Babcock’s words on his leg.

No Maple Leafs team in modern history had truly rebuilt, because razing a team to its foundation and starting fresh means a lot of losing, and losing means layoffs. Instead, decades of leaders had patched the organization together with hockey tape, trading young prospects for veterans and generally ignoring the virtues of patience. One has to look no further than the current series against Boston for an example. The Bruins’ goalie, Tuukka Rask, one of the best in the world for much of the past decade, was once a highly touted prospect for the Maple Leafs. Instead of developing him, though, the Leafs traded him to Boston for Andrew Raycroft, who was an older and more NHL-ready player but, as everyone soon learned, much worse.

For Shanahan, doing things right meant focusing on youth. The NHL salary cap makes a stable of young, affordable talent a necessity for sustained success. So Toronto built its future on the backs of teenagers: the gangly Mitch Marner, elvishly handsome William Nylander, and, of course, the outlandishly talented Auston Matthews. Each of these forwards were nineteen when they were called to the NHL. Veterans, such as Matt Hunwick and Milan Michálek were acquired to mentor the youth, not take their jobs. No one expected the team to be good from the outset, but there was a vision.

Last season, after a slow start, the team was better than expected, bordering on great. In the final quarter, they managed to be among the league’s best. The Leafs found themselves back in the playoffs, facing off against the Washington Capitals, who had just won the Presidents’ Trophy as the best team in the NHL. The Capitals were favourites to win the Stanley Cup and were expected to dispatch of the Maple Leafs without much trouble. But Toronto played with irrational confidence and made it to overtime of game six before being eliminated. When he had a second to reflect after it was finished, Matthews summed up the experience for his teammates: “We turned a lot of heads out there.” With success, however, came increased expectation.

After all the machinations of the “Shanaplan,” the Leafs went into this year’s season in a familiar place: they were good enough to disappoint. Which is why it was so upsetting that, in the initial leg of this playoff series against Boston, the Leafs seemed to be simultaneously anxious and indifferent. On Monday night—game three—the series came to a frozen-then-flooding Toronto. From the opening faceoff, it was clear the focus from last season had returned. The offence was organized, and the defence was diligent. Andersen controlled pucks with searing calm. Late in the third period, Toronto was ahead 4–2. All they had to do was hold on.

In 2016, the Chicago Cubs found themselves in the seventh game of the MLB World Series, determined to end a 108-year-old championship drought. The Cubs franchise was plagued by a collection of cruelties perhaps outweighing Toronto’s, and they were on full display. Chicago had opened up a three-run lead, but in the eighth inning, a Cleveland home run tied the game—it was the latest game-tying home run ever in the seventh game of a World Series. For the Cubs, unfortunate developments like this had become familiar over the past century, and they never ended well. After a scoreless ninth inning, though, the skies opened, and rain pelted the field. The game was delayed by seventeen minutes. When it resumed, Chicago led off the tenth inning and scored two runs. In the bottom half, Cleveland only scored one. The Cubs were world champions once again.

In sports, ghosts don’t announce their entrance, and they don’t cede without a fight. The weight of failure isn’t lifted with talent alone but with timing and luck and persistence. After the World Series, Cubs star Anthony Rizzo called the rain delay the most important thing to happen to the franchise in 100 years. The team was shaken by Cleveland’s comeback, and the pause gave the players a chance to refocus. For the first time in a long time, something went right.

As the third period in Monday’s Leafs game wound to a close, Boston attacked feverishly. The Bruins sent shots flying toward Toronto’s net, and they hovered around the crease in the hopes of finding a rebound. With two minutes left, a fake shot fooled Andersen, and a pass found a Boston forward with only empty netting in front of him—it looked like the mirror image of Boston’s final goal in 2013. The Boston player received the puck cleanly and sent a one-timer toward the net. Andersen, diving to his right, stretched his stick toward the far post. In mid-air, his paddle caught a piece of the puck and redirected it toward the opposite corner—it was the save that Reimer couldn’t make. The Leafs won, and though Boston is up 2–1 in the series, there’s hope going into game four. Maybe Andersen’s save, with all its narrative symmetry, will be what it takes to overcome history. Eventually, something has to.