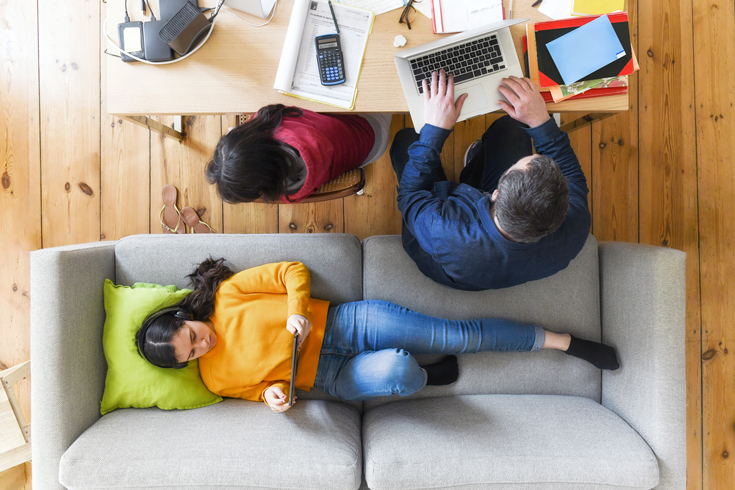 I’m not sure school ever agreed with me. The problem wasn’t so much the work—as a young student, I was lucky to excel in English and science. Like many kids, I had to deal with bullies, who teased me for being academically focused. But I also met my fair share of friends. Underneath it all, though, I felt frustrated that I couldn’t pursue what truly interested me. As students, we were shuffled rapidly between classes, with little time for free creativity. After school was no better. Reading was my favourite activity, but it was hard to find time for it—starting at around age eight, I spent every night saddled with hours of homework.

My parents could see me struggling, and they recognized an opportunity to do things differently. While the traditional school system has its merits, my parents believed it wasn’t the best place for my siblings and me to learn resilience. School is where “most decisions are made for you, and there is little chance to escape the cookie-cutter reality of it,” my mother said. For a decade, she and my father had been aware of home-schooling as a possibility. By the late 1990s, when I was in grade nine, they had started to research the idea. They believed independent learning—in which kids sign up for their chosen classes, interact one-on-one with teachers, and negotiate their own extracurricular activities—teaches life skills that provide excellent preparation for adulthood.

They broached the subject with me during a walk, one October, on a local nature trail where we fed seeds to the chickadees and talked about whatever was on our minds. I’d never heard of home-schooling before. But, for a kid who wanted independence as much as I did, it immediately felt like the right choice.

The first obstacle was convincing the Ministry of Education. Every year until her children reached the age of majority, my mother dutifully sent a letter in the mail stating our names and dates of birth. Then, she would drive to the local school-board office to fill out a form promising to “supervise [the kids] appropriately.” And suddenly, at the end of grade nine, I was free. I left a normal high school in June. The following September, I continued my grade ten studies at the dining-room table, alongside my younger brother and a few feet away from my preschool sister, who worked with my mother in the kitchen.

I’ve been recalling my home-schooling experience in recent weeks, after the coronavirus pandemic rapidly closed schools and workplaces across Canada. Suddenly thrust together with their kids all day, parents are dealing with the new challenge of supervising lessons on top of work and income concerns. Though my gentle introduction to home-schooling does not remotely resemble what families are grappling with today, I believe that learning outside of the traditional school environment still has huge potential to foster children’s creativity and independence. I want to share my story because I believe my parents helped me overcome a widespread myth: that somehow a child’s grown-up life will be hindered by their family taking schooling into their own hands. My mom remembers adults regularly telling her and my dad that their three children would miss out on “socialization” or that we would fall behind. And this was even after my parents had spent years discussing and planning their academic approach—far from the situation facing parents today.

Parents, I am trying my best to be your cheerleader. Though they may not be practising multiplication or doing required readings, your children have the opportunity to learn other life skills by virtue of spending more at home—skills that will be useful in the postpandemic world to come.

Stephanie Sewell is an independent-education consultant in Chelsea, Quebec. In the wake of school closures due to COVID-19, she established Unexpected Homeschooling, a Facebook group for parents who suddenly find themselves having to take the lead on their children’s education.

Sewell wants to refocus the conversation away from kids “keeping up” with their studies. Instead, she emphasizes family needs during this crisis. “Children and parents are living through something hard. It is way more important that we look after everyone’s mental and physical health than that the kids do academics,” she says. “Schools will move forward academically from where kids are currently at when they open. There is no such thing as ‘behind’ when everyone is out of school.” Sewell’s is an educated guess—it’s not yet clear how schools will handle this unprecedented situation, though some school boards are responding by counting only new grades that raise, rather than lower, a student’s overall mark.

Sitting at the dining-room table, I never really felt “behind” or “ahead” of other students, only that I was confident in moving at my own pace. There were certainly frustrations involved: in my distance-education courses, having assignments marked by mail was a process that could take three or four weeks, and the slowness of this correspondence meant I spent an extra year in high school. But the delay did not put me “behind” in any significant way. I was able to pursue my journalism degree and build the foundations for a career.

Sewell has spent a lot of time talking to worried parents in recent weeks. Some are concerned about their kids being on the internet constantly, but Sewell reassures them that their kids’ time online may be more balanced than they think. While limits are sometimes appropriate, she says, often, when left to their own devices, kids end up doing what is best for their mental and physical well-being or—as I did—independently diving into passions they were not able to pursue in school.

My parents’ reason for taking us out of the system was to move toward what my mother calls “a more organic way of learning.” It’s true that I still spent a lot of time sitting at a table reading textbooks at home. But I spent just as much time supplementing those studies with other life skills: housework, volunteering, filling out paperwork, and performing career-related research. The sudden shift toward home-schooling caused by the pandemic may offer similar opportunities even as it also presents unprecedented challenges.

At our house, we had dial-up internet and a limited number of hours per month to share between all of us. That usually equated to about half an hour a day each for the kids and a few hours for my father to do his own work and reading. On the day that astronaut Chris Hadfield took his first spacewalk, in 2001, my parents made an exception—I was obsessed with space, and there was not enough TV coverage for me to watch what was happening. I must have used about sixteen hours of internet over two days, watching still picture after still picture as Hadfield moved around the International Space Station and helped install Canadarm2. Twenty years on, I still remember it as one of the formative educational experiences of my childhood.

Some families are still too overwhelmed by current circumstances to test out a brand-new routine. “I haven’t even tried to home-school my teens yet because they’re too anxious,” tweeted Ottawa author Amanda Jetté Knox—who has four kids, one of whom is out of high school—in the early days of the pandemic. “If that’s your family right now too, please know you’re not alone & it’s 100% ok. This is a traumatic situation and our kids need time to adjust. Give them the space to process. Math can come later.”

While most of my own schooling took place under normal circumstances, I remember our schedule shifting in the days and weeks after 9/11. I was in my late teens, then, and I sat for hours in front of the television. During that time, our parents encouraged us to keep meeting up with friends and to carry on with normal activities as a form of self-care. Today’s pandemic presents an additional challenge as many of the activities we think of as part of “normal life” are impossible under social-distancing measures. Instead of in-person meet-ups, many of my friends with children are encouraging their kids to do video chats with classmates, friends, and teachers.

These new circumstances also present a challenge for parents who are trying to balance home education with their own work responsibilities. Jan Frolic, cofounder of the Boypro-ject in-school curriculum program, has worked from home her entire career. For eighteen years, her kids were around for most of the day. She recently tweeted, “It’s not the routine that is hard—it is the fear and grief. You can’t fix that with ‘work from home’ tips.”

Affected families could begin by engaging in a broader discussion about joint goals at this troubling time. These goals might be as simple as “not kill each other,” Sewell jokes. Each family’s approach will vary depending on their kids’ needs, she adds.

Looking back on the lessons of my own home-schooling, I recognize how my parents worked to supplement our schoolwork with other life experiences. Even as both of my parents contributed to teaching us, my dad continued to work days in the federal government, pulling overtime where possible, which gradually freed up some money for extracurriculars, like horseback riding and piano lessons. Since my parents were not teachers, they encouraged us to seek out as many of them as possible, even from home. “This all came out of a place of privilege, and we were lucky to be able to make these choices,” my mother says.

Moreover, we were encouraged to be members of a community as well as part of a household. We took on volunteer positions—one of my gigs as a high school student took place at the stable, where I helped young children with disabilities ride. We kept up with the news and lined up at the polls with my parents during elections even before we were old enough to vote ourselves. “There was generally an emphasis on doing something that interested you during the day—be it written course material or colouring or Lego,” my mother says. “Learning doesn’t need to be graded or judged.”

Ultimately, Sewell encourages parents to think long-term as a way to remember that their kids will be all right. She advises parents to ask themselves, “What does it actually mean to be educated? What is the big picture? What do I truly want for my child when they are grown up?” Both positive moments and instances of challenge are part of children’s education, she says. “The path they are walking is preparing them for their future.”

Elizabeth Howell is a science and space journalist based in Ottawa. Her work appears regularly in publications such as CBC News, Space.com and Forbes. Her upcoming book about the Canadian astronaut program, Canadarm and Collaboration, will be published in October 2020.

The Epidemic of Teacher Burnout

A Lonely Year on Campus