Why Every Donkey Deserves a Home | The Walrus
Skip to content 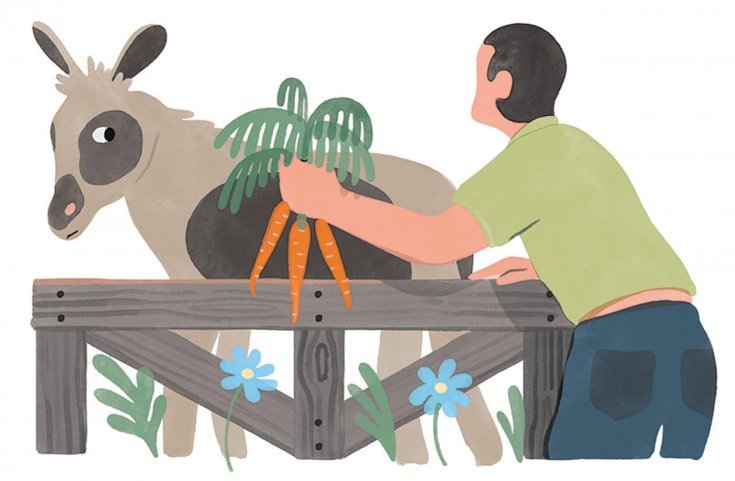 Some people are predisposed to adore animals whose most affectionate moments could only be described as aloof. Yes, I’m a cat person; my cat generally treats me like garbage, and I love it. My donkey, too, doesn’t like me. Or, rather, he doesn’t seem to care about me one way or the other. Franco lives at the Donkey Sanctuary of Canada, an organization in Puslinch, Ontario, on a tract of rolling pasture surrounded by wetlands and hiking trails. Four years ago, my husband sponsored Franco as a birthday gift for me. I have visited the sanctuary regularly since then, but Franco keeps his distance. He tolerates me from afar, looking at me with the same air as my cat staring dispassionately from the back of the sofa.

Before Franco, my only personal experience with a donkey had been when I was around six years old. Molly, a lovable old miniature donkey that belonged to a family friend, left just around the time I was getting attached to her. My family had horses where we lived in rural Vermont, and Molly had come to briefly keep them company. Because donkeys are part of the equine family, they have superficial similarities to horses: hooves, manes, long faces. But horses have a herd mentality and startle easily. Donkeys, meanwhile, have a strong sense of self-preservation, and they develop bonds with only a few friends—often other donkeys, sometimes horses, and infrequently humans.

I didn’t know it back then, but donkeys come from the mountainous desert regions of North Africa. They were imported 500 years ago to North America, where they worked on railroads and in mining and farming. Now that technology is more common in agriculture, they have largely lost their former purpose, and other, more odd, human-donkey interactions have taken over. Donkey milk is sold for exorbitant prices as a cosmetic and health product, as is a gelatin made from donkey skin for use in traditional Chinese medicine. In the 1990s, a miniature-donkey pet craze led to irresponsible breeding operations.

Canada’s natural environment has always posed health risks for donkeys: grass is too high in simple sugars and starches for their digestive system, rain can cause health problems because their coats are not waterproof, and soft soil can harm hooves that are built for wear by rocks and sand. If a donkey’s hooves are not trimmed regularly, they can grow, curl, and crack—a life-threatening condition.

The number of donkeys in need of rescue—according to some estimates, in the tens of thousands in North America—is a constant challenge; many are abandoned or mistreated. The Donkey Sanctuary of Canada, which has been in operation since 1992, is the “forever home” of nearly 100 equines, some of whom will live well into their forties. Staff members and dozens of volunteers monitor the animals’ eating and social habits. When a donkey passes away, surviving donkey friends are given private time with the body to process the passing. Sometimes, the volunteers tell me, mourning donkeys become so depressed they refuse to eat.

When I first visited the sanctuary four years ago, I walked into a paddock of docile animals milling around in pairs. I brushed some chubby miniature donkeys while taking in the scene: a central path and several large barns surrounded by pastures. A volunteer walked me over to a fenced-in area reserved for recuperating donkeys, and that is where I first met Franco. He was being treated for something, probably lice, and his normally fluffy coat had been shaved. I cooed over the fence, but Franco, who has been at the sanctuary for more than twenty years, stayed away.

I’ve been back many times since. Franco is usually out of reach, enjoying the company of his friend Austin—another donkey, of course. So I pet and say hello to whomever is feeling friendly. It’s a quiet place, even with visitors around, the silence punctuated only by donkey song (a loud braying) and children’s delighted squeals. Standing there feels like a meditation and an apology: acknowledgment of a painful history and intention for a better way forward. I love all animals. No particular trait—not their sweet faces nor their capacity for social connection—makes donkeys more deserving of care. But they’ve been used, abused, neglected, and displaced for centuries. It’s time we gave them a home.

Frank Griggs is a writer, editor, and creative consultant based in Toronto.
Tallulah Fontaine