Why Do We Have Such a Problem with the Way Women Speak? | The Walrus
Skip to content 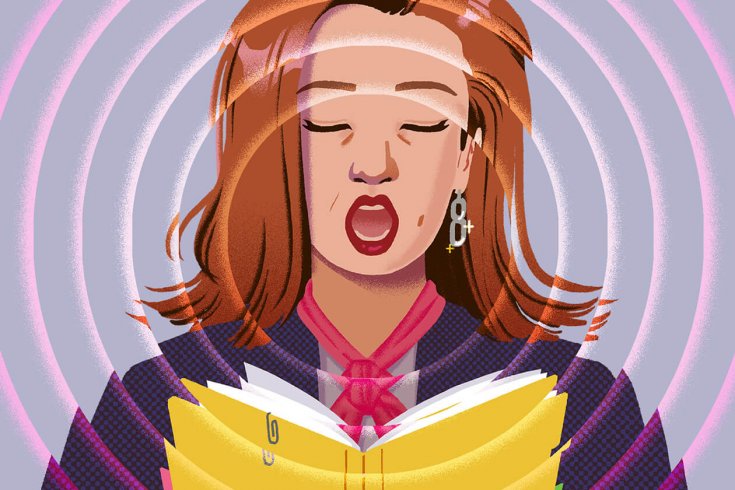 In the early months of 2008, as her public profile grew, Karen Stintz, then a Toronto city councillor, heard complaints familiar to many female politicians: her voice, she was told by colleagues and constituents, was “shrill,” and she was speaking too quickly for her message to register with her audience. Stintz, who would go on to make a bid for mayor in 2014, worried that her voice would hinder her—that people might only hear how she spoke instead of what she had to say—and so she sought out the services of vocal coach Lynda Spillane.

Spillane, whose voice is layered with British, Australasian, and American lilts, considers the voice to be an “instrument that most people haven’t learned to play.” In order to learn, she says, you first need to recognize that the voice is changeable. People tend not to think about how much the voice changes to reflect its social environment, but studies have shown that we adjust our pitch in accordance with our perceptions of social rank—we lower our pitch to project dominance and raise it to show submission. We associate low voices—that is, male voices—with competence and trustworthiness.

One study, published in 2013, measured the vocal pitch of 792 male ceos and found that those with lower voices were more likely to run larger firms—a 1 percent drop in vocal pitch was associated with a 1.4 percent increase in the size of the firm managed. (Women were excluded from the study because there weren’t enough of them serving as ceos.) This goes a long way toward explaining why women, whose voices are, on average, almost twice as high as men’s, face a particular challenge when speaking in male-dominated fields, like business and politics. The upshot: learn to speak in the low, slow tones we associate with men—and, therefore, leaders—or face a backlash.

Women’s voices are scrutinized to an almost comical degree in the political sphere. Margaret Thatcher trained with a vocal coach from the Royal National Theatre to help rid her voice of its “shrill” tone. Her voice dropped a remarkable forty-six hertz, though it was not enough to shield her from being nicknamed “Attila the Hen” by members of the British Parliament. During Hillary Clinton’s political campaigns, her voice was derided by pundits as “screechy,” “nagging,” and capable of making “angels cry”—a type of criticism her male counterparts did not have to worry about. For Stintz, the coaching was simple pragmatism: “I learned that if I have something important to say, I better learn how to say it.”

Stintz’s efforts to win the public over backfired in an ironic fashion: media coverage of her vocal coaching cast it as a petty expense, a waste of taxpayer money. (She paid for it out of her council budget.) For Stintz, it was a lesson in the way women are scrutinized for being proactive about their careers. “It was a little disproportionate,” she says, citing large sums that her colleagues spent on language classes and barbecues, which garnered less attention. The backlash she faced for spending money on vocal lessons wasn’t about the “frivolous” expense at all, she says—it was a rejection of her ambition.

In 1998, researchers at Flinders University in Australia discovered that the phenomenon of women adjusting their voices isn’t restricted to politics: they found women, more broadly, are speaking in lower pitches than they were a few generations ago. By listening to recordings of women in the 1940s and comparing them with recordings from the 1990s, researchers found that their average “fundamental frequency” had dropped by twenty-three hertz—a drop significant enough to be audible (roughly, the difference between the G# below middle C and F#). The researchers speculated that the prevalence of women with low voices in the media might be helping to perpetuate the stereotype that a low voice is a measure of competence and that women might be imitating what they hear as a way of projecting more authority.

Jay Miller, a veteran vocal coach, often works with women who are concerned their voices are too quiet, high, or raspy. He also regularly works with women concerned about “upspeak”: when the speaker inflects a statement toward the end so it sounds like a question. Along with vocal fry—lowering one’s voice to a gravelly timbre—upspeak is considered to be a particularly female habit, even though it’s present in people of all genders.

Much of the criticism of women’s voices has to do with how people conceptualize leadership. Men, after all, have dominated public discourse since we’ve been recording it. In a lecture about the voices of women in public life, classicist Mary Beard reminded her audience of second-century lecturer Dio Chrysostom, who asked his audience to imagine a community struck by an affliction “harder to bear than any plague”: the eradication of the male voice and its replacement with the female. Beard pointed out that, while we are removed by almost two millennia from the orator—whose epithet Chrysostom means “the golden mouth”—our culture is still the heir of a Greco-Roman style of public discourse so biased against the female voice that “one ancient scientific treatise explicitly [explained that] a low-pitched voice indicated manly courage, a high-pitched voice female cowardice.”

Some scientists speculate that we prefer lower voices because they indicate a higher level of testosterone, the hormone associated with developing muscle mass and, in turn, with better hunting-and-gathering capabilities. While our need for brawny leaders has long since evaporated, our preference for low voices has not.

The bias toward masculine voices has far-reaching implications for women in workplaces, where, studies show, women are still more likely to be interrupted and critiqued for expressing emotion. Miller has written that many of his female clients with high voices are associated “with youth, inexperience and even weakness.” As a result, “opinions are dismissed and accomplishments are overlooked.” For all its seeming frivolity, the way we speak has an enormous impact on the way people perceive us.

Although most women can learn to drop their pitch and project a resonant voice to a certain extent, it’s impossible for women to ever truly speak like men. If we set aside the bias that forces women to try, in purely pragmatic terms striking the balance between speaking with a conventional sense of authority and speaking like yourself can pose a challenge: Clinton was perceived as unemotional and cold even as she was ridiculed for sounding like a nagging housewife.

Stintz realized that her tendency to speak in an animated way distracted her audience; changing the way she spoke is akin to female politicians curating their appearances to try to ensure how they look does not distract or alienate voters. Recognizing that these double standards exist doesn’t mean you have to agree with them, Stintz explains, but “appreciate that [even] if you don’t, it will have an impact. And your message might be watered down by the fact that you’re creating some other statement somewhere else.” Like an unconventional haircut or blazer, a girlish voice might be the reason a woman loses a vote or gets passed over for a promotion. Walking the line between personal and powerful is something we expect leaders to do with ease, but that path is often more difficult to navigate for women. It’s a wonder they speak up at all. And that, of course, is the point.

Danielle Kinahan (@daniellekinahan)is an editorial fellow at The Walrus. She writes about culture and technology.
Mariah Llanes