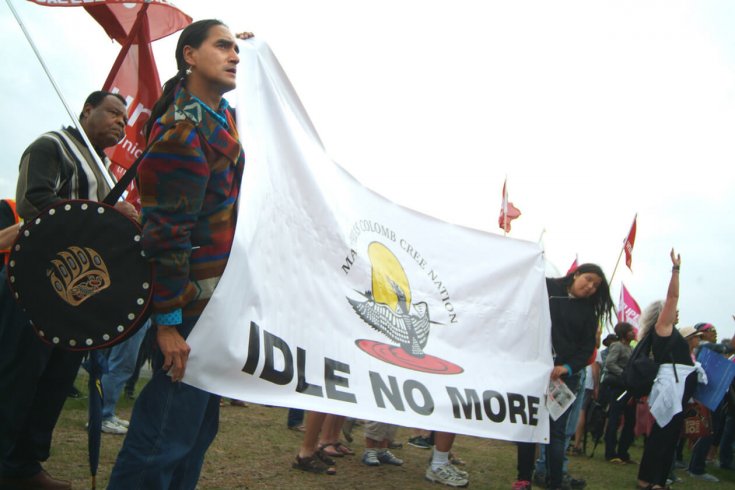 In 2012, the Conservative government of Prime Minister Stephen Harper introduced two omnibus bills that included significant changes to the Fisheries Act, the Environmental Protection Act, and the Navigable Waters Protection Act. Bills C-38 and C-45—which were passed, at different times, that same year—were designed to eliminate protections for 8,500 rivers more than 2 million lakes across Canada. The Conservatives wanted to cut the red tape that had stalled or led to the cancellation of resource-extraction projects. However, for Indigenous people, that red tape was the process through which they could raise objections, seek accommodations, and gain a say in what was being done on their ancestral lands. The reaction to the omnibus bills was Idle No More, the protest movement that led to rallies, flash mobs, teach ins, and even blockades.

On January 8, 2013—at the peak of Idle No More—the Mikisew Cree of Alberta’s chief, Steve Courtoreille, launched a lawsuit against the federal government, asserting that the omnibus bills should be ruled out of bounds because the Harper government had not consulted with his First Nation. Speaking at the time, Chief Courtoreille said, “They can’t ram bills down our throats and expect us to accept it.”

Three weeks ago, after more than five years of litigation, the Supreme Court unanimously rejected Chief Courtoreille’s argument. “The Crown has to act honourably toward Canada’s Indigenous peoples,” the Supreme Court said in its case in brief. “But this does not mean Parliament has to consult them when making laws.”

Pamela Palmater, a Mi’kmaq lawyer and chair in Indigenous Governance at Ryerson University, wrote in Maclean’s that the Supreme Court ruling in Mikisew Cree First Nation v. Canada “gutted” the duty to consult implicit in Section 35 of the Constitution, which “recognized and affirmed” Aboriginal rights, including current and future treaty rights and obligations. The duty to consult took shape in a series of cases in the 1990s, leading up to the 2004 Supreme Court case Haida Nation v British Columbia. In the Haida Nation decision, the court found that the Crown had a “duty to consult with Aboriginal peoples and accommodate their interests”—this duty was based on a concept called the “honour of the Crown.” The honour of the Crown takes many different shapes, but ultimately, it comes down to this, from the Haida Nation decision: “To unilaterally exploit a claimed resource…may be to deprive the Aboriginal claimants of some or all of the benefit of the resource. That is not honourable.”

The Canadian Crown is a multiheaded hydra beast in Canadian law and includes the Queen, the Governor General, and the prime minister and cabinet when they exercise certain executive functions involved with imposing regulations and carrying out law. However, when a minister is introducing a law in Parliament, are they acting on behalf of the Crown—i.e., the Queen or state—or are they performing in a legislative role? In Mikisew, Chief Courtoreille had taken it as a given that no matter what a minister does, they’re always acting on behalf of the Crown—and so, when they introduce a law, the honour of the Crown demands that consultations be done. The Supreme Court’s decision tore open this assumption. They found that a minister acting in their legislative role is not the Crown at that time, and so the court has no jurisdiction.

In an October 12 Twitter post, CBC reporter Jorge Barrera shared the opinion of a contact of his who works with treaty nations: “The case could have been in regard to shoe manufacturers and ended up in the same result.” This judgement, in other words, is about jurisdiction. The courts found that telling lawmakers how to do their jobs violates the separation of powers. Once the Crown, in the form of the Governor General, puts her signature on a law, then the courts can rule, then the law itself and the regulations attached to it become subject to Section 35. The law can be weighed against treaty rights, and regulations become subject to the duty to consult. But the courts don’t have the constitutional authority to get involved in the actual sausage making of the legislature.

The Misikew judgement itself is not all bad; there are positive scraps that can be found—specifically on the duty to consult. It is a encouraging to see how language of consultation has evolved, phrased in the judgement itself as “consultation and accommodation.” This builds on the recent federal court decision in Tsleil-Waututh Nation v. Canada, which stopped construction of the Trans Mountain Pipeline because the consultation process with First Nations was seen as a meaningless venting session and the federal government wasn’t truly open to making accommodations to First Nations concerns.

Another positive change is Justice Andromache Karakatsanis’s statement that, while “legislation cannot be challenged on the basis that the legislature failed to fulfill the duty to consult,” should that legislation become law, and be challenged before the courts, “the extent of any consultation may well be a relevant consideration”—meaning that the courts can’t force the House to consult and accommodate Indigenous people, but if legislators refuse to do so, it may be a deciding factor in eventually ruling the law a Section 35 violation.

Regardless of how you see the decision, one thing that the judges get unambiguously right in their judgement is that “it is of little import to Aboriginal peoples whether it is the executive or Parliament which acts in a way that may adversely affect their rights.” In other words, non-Native jurisdictional squabbles don’t matter—what matters is results. That the case doesn’t fundamentally harm the principle of the duty to consult will carry little weight with regular Indigenous people. In our eyes, this judgement shows that the Trudeau government has, by choosing to continue this Harper-era case, yet again turned its back on us. While the court has decided it can’t intervene and demand that the government consult with Indigenous people during the law-making process, there is nothing that prevents consultation at that stage. And were the prime minister to come out with an announcement filling this jurisdictional gap—and bringing Indigenous people into the legislative process—it would go a long way to restoring his credibility with us and affirming a real nation-to-nation relationship.

The Trudeau government has been notably silent in its response to the Misikew decision. And with good reason: the judgement puts it in a awkward place at a point when consultations on the Trans Mountain Pipeline may soon reopen. The construction of this pipeline is, after all, exactly the type of resource-extraction project that Harper’s omnibus bills was meant to facilitate. The Trudeau government explicitly defended that approach in court in the Mikisew case, and effectively, that’s what the government defended in the pipeline case. It’s important to remember that bills C-38 and C-45 sparked months of nationwide protests, protests which brought together thousands of Indigenous people and created venues for more and more extreme views. These led, in time, to protests that killed other industrial projects, such as the Northern Gateway pipeline, and that pressure provided a model and a social infrastructure to build the movement to oppose the Trans Mountain Pipeline.

By winning on the technicalities in Mikisew, the Trudeau government now finds itself boxed in. The court declared that it had no jurisdiction in Mikisew, but that once a law was passed, and once the Crown began to exercise its executive authority, there was a duty to consult and accommodate. The Trudeau government must now prove it. Should it fail to do so, and if Indigenous demands for consultation and accommodation aren’t seen to be met, the fight won’t just be back to the courts—it could be back to the streets with a new Idle No More, one that, like the last, will increase Indigenous militancy and set the stage for another decade of fights over resource development.