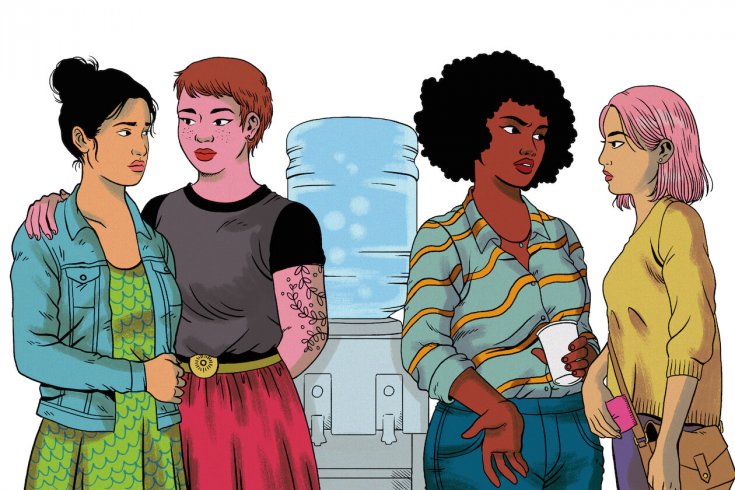 I’ve never gone to work on the first day of my period. Two years ago, I was diagnosed with endometriosis, an incurable condition that arises when the lining of the uterus grows in other parts of the body, such as the fallopian tubes, ovaries, the bladder, or even the lungs or brain.

Days and even weeks before my period, the cramps rip through me, to the point where I’m in so much pain that I can’t even open a bottle of Advil. My face flares up in cystic acne. If I’m in public, I have to take a cab home. When my period finally arrives, I can actually see my stomach contract with cramps. But instead of worrying about the pain, I worry about my paycheque. Anyone with painful periods can tell you that these can be irregular, so it’s not just something you can book off with the Human Resources department a month in advance. As a student, it was always easy to skip class when the pain struck, but the workforce doesn’t grant you excuses. It’s difficult and embarrassing to explain that you need three days off because you’re menstruating—which is, of course, supposed to be natural and routine.

According to US data, however, up to 20 percent of women have painful periods like mine. There is a range of reasons why: endometriosis (which affects up to 10 percent of women of reproductive age), polycystic ovarian syndrome, uterine fibroids or adenomyosis, or simply no clear cause. There are no comparable recent studies in Canada, but a 2005 study found that 60 percent of women with such symptoms described them as moderate or severe, with 51 percent saying their activities were limited because of period pain, and 17 percent reporting that they missed school or work. Even women with relatively painless periods can still have cramps, exhaustion and an overall hard time being productive. Some studies have shown that, in general, women have a hard time concentrating when they have period pain. And since this pain can increase or decrease each month, and everyone has a different threshold for what is painful, there’s no objective standard.

In Canada, most women still have to work through their period pain, but other countries have already taken the lead on period policies. In March 2017, Italy’s parliament announced that it is considering a bill that would require employers to give female employees who experience debilitating periods three days paid menstrual leave every month. Though employees would need a certificate from a medical specialist confirming their need for the time off in order to qualify, the Italian edition of Marie Claire nevertheless described the bill as “a standard-bearer of progress and social sustainability.”

In fact, Italy’s proposal is nothing new or radical; menstrual leave is quite common, and exists in several countries. It has been implemented in Japan since 1947, and South Korea has given women one day off a month since 2001. Indonesia, Zambia, and some provinces in China give women one to two days off; Taiwan now gives women three days. (There are also some cultural influences: according to Chinese herbal medicine, a woman must eat nutritiously, avoid vigorous exercise, and keep warm to maintain her energy during her period.)

A Russian lawmaker even mooted the idea in 2013, asking parliament to give women two days’ paid leave a month for their periods—but it was shot down by critics given his reasoning, which included the fact that strong pain during a woman’s period leads to “colourful expressions of emotional discomfort.”

Some companies also give menstrual leave to their employees. Nike has offered it since 2007; a British organization, Coexist Foundation, has a flexible period leave policy in the hopes of making its mainly female workforce more productive.

But Canada has yet to speak on the subject, though the question has been raised several times in recent years. The federal Liberal government under Prime Minister Justin Trudeau has been encouraging to women, offering $650 million toward global reproductive rights and health. There’s talk of extending maternity leave from twelve to eighteen months; this past March, Ontario’s human-rights tribunal declared miscarriage a disability and thus eligible for paid leave. After Trudeau’s pledge to legalize marijuana, Whoopi Goldberg started eyeing Canada as a potential market for her line of cannabis-infused menstrual pain products. Canada is on the road toward compassionate and sensible policies on women’s reproductive issues. Isn’t it time to make menstrual leave a reality here?

Menstruation has a history of suppression and dismissal, both on a societal level and within the medical establishment. Long-held anecdotal evidence that doctors tend to dismiss women’s pain—especially when the source of that pain is menstruation—has been proven by new research. The need to testify that we’re bleeding and in pain is a monthly fight: see, for example, last year’s round of viral videos in which men try having a period, or the “Menstruation Machine,” a conceptual art piece created by a Japanese artist in 2010. (The pain some women experience during menstruation has been compared to that of a heart attack.)

Clue, one of the new generation of women’s fertility apps that let you track your period (or ovulation, if you’re trying to conceive), reported on a recent survey of 5,000 Canadian respondents in which 16 percent said they had missed school, work or an event because of their period. However, pain isn’t the only reason Canada should consider menstrual leave —it’s financial. The average woman menstruates from the age of thirteen to fifty-one, and each period can last three to seven days. That’s about thirty-eight years and 456 periods.

Menstruation should no longer be a private issue. It should be public, economic and politicized.

As an exercise, the Huffington Post once tallied up that, over a lifetime, periods cost women roughly US $18,171 in supplies and painkillers. Where does it all go? I can tell you. We buy menstrual products such as pads, tampons and panty liners, or for the more sensitive or environmentally-conscious woman, menstrual cups. (Those new THINX period panties don’t come cheap.) We buy pain relievers—Midol, Motrin, Advil, and other pills designed for menstruation; we buy diuretics so we can button our pants, and other medications, including birth control and vitamins. When traditional Western medicine doesn’t relieve our symptoms, we seek out naturopaths and acupuncturists, whose services may or may not be covered by insurance. We buy heating pads, acne medication, and chocolate. A lot of chocolate.

With feminine hygiene products, medication, and cab fare to get me to and from work, I personally spend anywhere from $82 to $97 a month. That adds up to about one full day’s work if you live in Ontario and make the $11.60 minimum wage. Even at a more reasonable $15 an hour, it’s still a whole day’s income. For me, menstruation has cost an odd $18,624 to date—and I still have another decade and a half to go in my reproductive years.

Using Statistics Canada’s population figures, Canadian women currently of reproductive age will spend a collective total of $175 million on menstruation in our lifetimes. While there’s no time-loss count for Canadian women at work, menstrual symptoms cause over 100 million lost work hours annually for American women. In the United Kingdom, women take a collective 17 million days off annually because of their periods.

This lost productivity is a reality for many women, who grin and bear it, trying to go to work but unable to function; check anxiously for leakage, and make frequent trips to the washroom. The alternative is to miss a day’s pay and be anxious about calling in sick at the last minute, and then dealing with the risk of getting fired.

Women have fought hard to be treated equally at work. Since the 1970s and 1980s especially, this has meant downplaying some of the unique aspects of being a woman. Canadian critics of paid menstrual leave say singling out menstruating women could present a human-rights discrepancy, deterring companies from hiring women in the same way some women have been discriminated against in other ways (in 2012, for example, a woman was awarded $20,000 in damages by the Human Rights Tribunal of Ontario after being fired for being pregnant). Others say that menstrual leave would constitute a form of gender discrimination, privileging a woman’s pain over a man’s —or any other chronic pain condition.

Further complications include the way that gender-coded language excludes transgender and gender-nonconforming people who menstruate. It sets open the possibility for the government to regulate women’s bodies, a battle that continues to be waged through maternity leave and abortion rights in the US. It could also cause resentment among co-workers. In the Asian countries that offer menstrual leave, many women refuse to take it in order to avoid social stigma, resentment, and harassment.

But some gynecologists say menstrual leave signals a step toward admitting that women’s menstrual pain has been dismissed, and communicates the understanding that periods are actually debilitating for many women. It offers a solution to worker productivity and lost work hours. It could help workplaces redefine sick day policies, even ones that are being stretched now with last-minute emergencies. Most importantly, it would remove the financial and emotional burden for many Canadians, now silently carrying on with periods.

Menstruation should no longer be a private issue, but one that is public, economic and politicized. As Canada aims to be a world leader on women’s issues, it should consider what it can do to help alleviate the cost for women—and in turn, their employers—by addressing menstrual leave, and our periods, in all their messy, unstoppable glory.

Eternity Martis is a senior editor at Xtra. Her forthcoming memoir, They Said This Would Be Fun, will be published by McClelland & Stewart.
Jenn Woodall

Jenn Woodall is an illustrator, designer, and cartoonist.