Which Countries Get to Be Tourist Destinations? | The Walrus
Skip to content 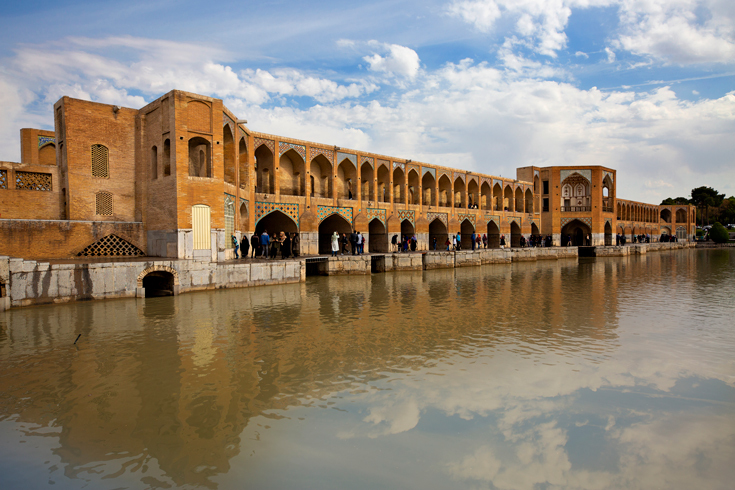 The historic Khaju Bridge on the river Zayanderud, in Isfahan, Iran. Photo by Ozbalci/iStock.

As I prepared for my most recent trip back to Iran, my friends started looking at me like they weren’t sure they would ever see me again. I learned to expect their wide eyes and slow nods. By contrast, when I tell people that I’ve never been to Europe, I’m met with dismayed looks and replies like, “But don’t you like art?”

Iran is one of those places that tends to get skipped over when we talk about the life-changing magic of travelling. Recent events have only made people’s fear of the country more intense. In January, a tragically downed airplane reignited anxieties about civilian safety in the Middle East. Floods, droughts, protests, and sanctions have led to deaths across the country, and government crackdowns on protesters and dissidents have brought even more violence and media attention to the region. It’s understandable that we would focus on the tragic; the expression “if it bleeds, it leads” applies to our memories as much as to the nightly news.

But my memories of Iran are of joy despite difficulty; of beautiful, provocative art created in spite of censorship, like Abbas Kiarostami’s poetic films and rapper Hichkas’s subversive music; and of kind strangers in grim situations. I think of boisterous nights next to Isfahan’s Zayanderud, a giant river that bisects the city. Today, the river is largely dried up after years of drought and government mismanagement, but in my memories, it’s as lively as ever, with people scattered on both banks in the evenings, laughing and playing music. If I was worried about anything, it was the heat, which often left me passed out in cramped taxis, and the stress of dealing with a large extended family full of histories and drama that I barely understood. I was mostly just excited to see a place that had loomed large in my fantasies for so long. Yet my friends’ reactions weighed on me more than I realized. As my departure date grew closer, I felt increasingly apprehensive.

These dynamics have much to do with which global destinations are branded as desirable and which are not. Prior to the pandemic, the UN World Tourism Organization’s 2019 report tallied 1.4 billion international arrivals around the world. Of those adventures, about 710 million, or almost 51 percent of total travel, were concentrated in Europe. Of all the continents in the world, it’s Europe that is usually portrayed as the pathway to self-actualization, Europe whose countries seem to most often meet our standards of safety and culture.

Today, in the midst of the COVID-19 pandemic, the risks of travel are more apparent than ever. Given our increased anxieties and governmental restrictions, it’s possible that a post-COVID-19 world will see adventurers sticking even more closely to the destinations deemed “safest,” even if doing so means missing out on some of the most interesting cultural histories and experiences the world has to offer.

These narrow preferences have consequences, for both the places we obsess over and those we ignore. Tourist hotspots like Barcelona (whose 1.6 million residents welcomed 32 million tourists in 2016) and Venice (which has had to limit visiting cruise ships to protect its canals and waterways) erupted in antitourism protests before the coronavirus pandemic. Locals rallied against rising housing prices, impossible congestion, and the collapse of nontourism industries.

The dangers I’d been warned about by my friends certainly weren’t baseless: the Iranian government’s history of human rights abuses has been well documented. But, in my experience, these worries are rarely applied evenly. France has a higher terrorism index than Malaysia does—the latter being another country I was warned against travelling in alone—but would-be tourists tend to think of the lovely galleries of Paris before they think of extremist violence, if they think of it at all.

This cultural hierarchy has created an inequality of attention that is dangerous in multiple ways: on one hand, surges in tourism to the places we consider safe, cultured, and valuable have displaced many of those living there; on the other, visits to places we deem dangerous have been replaced by an intellectual tourism that paints over their lived histories. There’s no doubt that travel helps us form a vision of the world and how we fit into it. But, when we dismiss certain places as unsafe, we are implicitly making a statement about which peoples and cultures we value and which ones we don’t.

When I was considering going back to Iran on my own, I mostly dismissed the travel advisories as overcautious warnings with a tinge of politically motivated bias. It was only last year, when I took a course on the history of the modern Middle East, that I discovered how firmly this attitude was embedded in academic and historical circles. Take Western museums, many of which have long housed artifacts from civilizations that would prefer to have them back, and have studied these artifacts without input from the people they stole them from. In physically “acquiring” the history of the Middle East, Western institutions have solidified their control over studies of the region by separating much of that history from its surrounding place and culture. Some artifacts, like Egypt’s Rosetta Stone, were taken directly by colonial governments and have been kept in the West ever since. Others, like a recently repatriated Achaemenid bas-relief from Iran, were stolen by private individuals. There are so many misappropriated pieces at the British Museum that the activist group BP or Not BP ran a “Stolen Goods Tour” of the museum in 2018 and a second in 2019.

Many museums justify their continued possession of stolen artifacts by putting forward a sense of responsibility for them; in 2011, Germany’s undersecretary of culture denied requests from Egypt for the repatriation of the famous Nefertiti bust by arguing that “art is part of the universal human heritage and—wherever it is—should be made accessible to as many people as possible.” The Middle East is home to the cradle of civilization, after all, an ancient society worth studying. Iran, for its part, is home to twenty-four UNESCO World Heritage Sites, including the tomb of Cyrus the Great (built in the sixth century BCE and reportedly visited by Alexander the Great) and the Golestan Palace, a brilliant complex famous for its marble thrones and great halls filled with giant mirrors and chandeliers. It’s the modern descendants of these cultures that people seem to have less respect for.

On top of physically removing artifacts that are central to the region’s cultural history, Western institutions create narratives that can drown out the work of Middle Eastern scholars. These academics are also stymied by other factors, like the limits placed on academic freedom by their own governments (from suspicion of their research to jailing or torturing those whose work contradicts the party line) and a lack of access to the institutional power of Western universities, which see Middle Eastern academics as “newcomers” to their own history, prevented by language and travel barriers from interacting with the existing Western scholarship. Whether at the hands of foreign scholars supporting the colonial project that has been and continues to be a major funding source or of corrupt domestic governments with an interest in deterring critical scrutiny, the marginalization of Middle Eastern voices serves only to prevent a true understanding of the region.

The dominance of Western voices in Middle East studies makes a certain amount of sense within the current institutional context, where familiarity with existing scholarship is generally necessary for success in any field and the colonial history of orientalism has resulted in an overwhelming amount of the Middle East’s canonical studies being written in European languages and from a colonial viewpoint. Yet, since many Middle Eastern scholars have access to neither Western scholarship nor the physical remainders of their cultural past, it’s hardly surprising that their work is challenging. Western scholarship is not inherently better at understanding and analyzing the Middle East; rather, studies of the Middle East have explicitly and continually worked to lock the region’s scholars out of their own history.

The separation of the actual place and people from studies of the region has had real consequences. Ann Lambton, for example, was a preeminent British Iranologist who wrote extensively of the “Persian Mind” and was instrumental in supporting the 1953 coup against Mohammad Mossadegh’s secular democratic government. Today, scholars consider this a pivotal event that strengthened religious leaders in Iran, contributed to the radicalization of the Middle East, and became a symbol of Western intervention that further encouraged the spread of anti-West sentiments. Bernard Lewis, described by the Encyclopedia of Historians and Historical Writing as the “the most influential postwar historian of Islam and the Middle East,” advocated fiercely for the Iraq War and wrote op-eds prophesying nuclear and military attacks from Iran that never arrived. He made these critiques not from the ground in Baghdad or Tehran but from New Jersey’s Princeton University.

The most valuable part of travel is being in proximity with people whose cultures and histories diverge from your own. In the absence of that experience, it can be easy to let media representations and political narratives bulldoze our empathy. In 2015, Public Policy Polling reported that 30 percent of Republicans and 19 percent of Democrats who voted in the US primary supported the bombing of Agrabah—the fictional city from Disney’s Aladdin. More chillingly, a 2019 survey by YouGov and the Bulletin of Atomic Scientists polled 3,000 American citizens and discovered that over a third of respondents supported a US preventive strike against North Korea and that their support was not significantly affected by the idea of increased civilian casualties. It’s hard to imagine anyone being that blasé about obliterating a place they had ever actually set foot in, a place with art and history and living, breathing people they had encountered, rather than just removing a “scary” name from the map.

Our perception of travel reflects our view of the world and what we deem valuable. These thoughts, in turn, reflect the circuits of power and control that divide people and cast foreign populations as one-dimensional villains. In lockdown, as I think about the places I want most desperately to see, I do sometimes imagine something like Europe’s impressive towers and lavish museums and fancy nightclubs. But I also think about the places, and peoples, I have been warned against most stringently by those who have never been there and likely wouldn’t even consider it. These are the places that I am most interested in discovering, and discovering myself in, next.

Roshana Ghaedi is an Iranian Canadian writer and student. Her work has previously been published in Kino: The Western Undergraduate Journal of Film Studies and Mythic by the Iconoclast Collective. She currently lives in Toronto with her two cats, Talah and Jigar.

Exploration Is a Flawed Notion