Go Ahead, Take That Vacation—but It May Be Unethical | The Walrus
Skip to content

The ads made some locals uncomfortable. Produced by Northern Vision Development, a real estate development company that operates five hotels in the Yukon, the images featured the territory’s beautiful vistas—snow-streaked mountains, a field of fireweed, the Yukon River—and promoted it as a “safe” and “friendly” summer vacation spot for British Columbian tourists. Some of the ads went even further: “Your cure for cabin fever is here.”

Since mid-April, the pandemic had kept the Yukon closed to nonessential travel. When the territory reopened its border, on July 1, it lifted the fourteen-day self-isolation requirement, but only for residents of British Columbia, Nunavut, and the Northwest Territories. On June 26, in anticipation of the reopening, Northern Vision Development started rolling out its campaign on social media. But marketing Yukon vacations to people in BC, where COVID-19 cases were on the rise, didn’t sit well with some Yukoners—at the time, the territory hadn’t had an active case since April. When two people tested positive after returning home from their Yukon trip, prompting exposure warnings in Whitehorse and Dawson City, locals got even more nervous. Residents in Dawson, a city of 2,000 that featured prominently in some of the ads, started a petition calling for an end to the “irresponsible, unnecessary, and inconsiderate” promotion of their town as a destination during the pandemic.

Tourism is an important industry in the Yukon—in 2018, it made up 5 percent of the territory’s GDP—and summer is the peak time for travellers. In September, the Tourism Industry Association of the Yukon warned of a potential “complete collapse” of the industry. Tara Borin, a poet who lives in Dawson City and works at the Klondike Visitors’ Association, knows how important tourism is to the town. “But then, on the other hand,” they add, “knowing that we’re this very vulnerable place with limited medical resources—a community of elders, some of whom are the last fluent Hän speakers in the world—we want to protect those people and protect our community.”

The tension in Dawson City is a microcosm of what’s unfolding across North America and beyond. As regions reopen, people’s minds are turning to travel. Taking trips is certainly more socially acceptable than it was in the spring, but not entirely. The Tourism Industry Association of Canada’s August report found that residents’ confidence in welcoming visitors remained low despite reopening. Drivers with out-of-province licence plates have been harassed in British Columbia, Nova Scotia, and the Yukon. In the US, celebrities have been criticized for ignoring travel restrictions altogether, while the New York Times reported that some people are keeping their trips a secret out of fear of being publicly shamed.

For months, people have laid low and stayed close to home. It’s only natural that we’d feel a little stir-crazy; after what we’ve endured, we surely deserve a vacation. But, even if you’re willing to overlook the personal risks of travelling, is it possible to visit a place in a way that doesn’t endanger its inhabitants? Tourism has always been entwined with privilege—a luxury accessible only to those who can afford it, often reliant on less-advantaged workers—but the pandemic has thrown its ethics into sharper contrast. Maybe the question people should be asking isn’t “Is it safe for me to travel yet?” but rather “Is travel even ethical right now?”

At the beginning of July, Karly Dely flew from Toronto to Edmonton, with her boyfriend, her brother, and her brother’s girlfriend, for a week-long stay in Jasper and Canmore. It was a trip they’d been discussing since before the pandemic hit; when summer rolled around, because Alberta didn’t have any restrictions on interprovincial travel, they decided to go forward with it. Still, for a couple of weeks before they booked, they watched case counts in both Ontario and Alberta. Dely says that, if there had been a spike even days before they were to leave, she would have cancelled. They were vigilant about physical distancing before departure, and Dely would regularly check in with the group to see if anyone was feeling under the weather.

When they landed in Edmonton, they bought food for the week at Costco—opting to wear masks in the store though the city didn’t yet have a bylaw mandating it. Travelling along the Icefields Parkway, the road that connects Banff and Jasper national parks, they found it easy to keep their distance from others. “We did a lot of hiking, and oftentimes we were the only people on the trails,” Dely says. By August, though, busy trails, littering, and overcrowded campsites in the Rockies had made headlines.

For those able to travel right now, that privilege comes with a complex set of questions. “It’s not a black-and-white issue of whether you can or can’t travel right now or you should or shouldn’t travel,” says Kelley Louise, founder and executive director of Impact Travel Alliance (ITA), a US-based nonprofit that promotes sustainable travel. ITA has been hosting a virtual talk series on the ethics of travel during the pandemic. “It’s become a much more complex issue that’s rooted in everything from your own safety to the safety of the destination that you’re visiting, balancing that out against the economy, balancing that out against all of these other nuances.”

At one of ITA’s talks in August, Navajo business owner Alfreida Littleboy spoke about the flood of tourists road-tripping to national parks in the American southwest. Many people travel through Navajo Nation land, which spans New Mexico, Utah, and Arizona and is home to many residents who don’t have electricity or running water. In May, the nation had the highest per-capita COVID-19 infection rate in the US.

Sometimes, when Littleboy arrives to shop at one of the reservation’s grocery stores, key items are sold out due to the volume of tourists. “They make it extremely hard for us to get our basic necessities, to get gas, propane, because it just is very crowded when we get there,” she said during her talk. Some of the travellers don’t wear masks either, apparently not realizing that they’re mandatory on the reservation.

Vacations were a privilege before the pandemic, but they’re even more so now that the economy has tanked and people have lost jobs and income—and destinations may be within a community of increasingly vulnerable people. There are ways that tourists can minimize their impact, like packing a cooler of food before leaving on a road trip—a suggestion Louise made for mitigating the problems on the reservation. “For someone who has the privilege to travel right now,” she says, “the absolute minimum that they can do . . . is to spend the extra time making sure that they are travelling in a responsible way.”

Dely felt lucky that she and her group were able to go on their trip during a window when Alberta’s cases had plateaued. “I don’t know that we needed [it]—that sounds superficial,” she says. “No one needs to go on vacation. But I think it did a whole lot of good for our mental health to get away like that, especially after being cooped up.”

It’s easy to wax poetic about how travel can broaden our horizons, help us learn about other cultures, and unite us across borders. UN secretary-general António Guterres did so in June, when he suggested that “tourism can be a platform for overcoming the pandemic” because it brings people together and promotes solidarity and trust.

But, in reality, travel is not going to save us from COVID-19. And, even though economies rely on it, global tourism can’t just be switched back on. Nor should we want it to be—the industry caused problems long before the pandemic hit. A 2018 study found that tourism accounted for 8 percent of global greenhouse gas emissions, while overtourism has prompted safety concerns at some sites, including the Louvre and Mount Everest, and environmental degradation at others, including Thailand’s Maya Bay and Boracay, Philippines.

With global travel on hold, we have an opportunity to address these flaws. “We shouldn’t be aspiring for things to go back to normal,” writes James Thornton, CEO of Intrepid Travel, in an email. Rather, we should “redefine what normal means, and use this time as a rare chance to think about how we travel, and how we can aim to be more ethical and sustainable travellers and global citizens in the future.”

Since the pandemic hit, Intrepid Travel—which has been carbon neutral since 2010—has focused on supporting what Thornton calls a “responsible rebuild,” particularly by advocating for net-zero emissions by 2030 and ending exploitative wildlife tourism. The company hopes more of the industry will follow its lead: in July, Intrepid released its “10-Step Quick Start Guide to Decarbonise Your Travel Business” and held a webinar on reducing companies’ carbon footprints. According to Thornton, it was attended by 800 travel-industry executives.

Louise agrees that going back to “normal” isn’t going to solve tourism’s pre-COVID-19 blights. The solution, she says, is to build a more resilient industry, one in which travellers make choices that have positive effects on local communities and on the environment.

One of those choices is to wait until it’s less risky. In the Yukon, a few people have used the hashtag #visityukonlater to encourage travellers to postpone their trips. Staying close to home doesn’t have to mean getaways are off the table, either—book a stay at a lodge or bed and breakfast in your province or visit a new park or museum. It’s even possible to go abroad without leaving your couch: at least one travel company is offering virtual “trips” to international destinations.

And, if you insist on travelling right now, pick your destination carefully and treat it as what it is: someone else’s home.

Rhiannon Russell (@rhrussell) is a freelance journalist based in Whitehorse, Yukon.
Natalie Vineberg 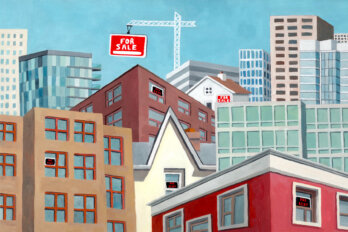 Many Canadians Will Never Own a Home. Does It Matter?