When the Rich Were Kind | The Walrus
Skip to content 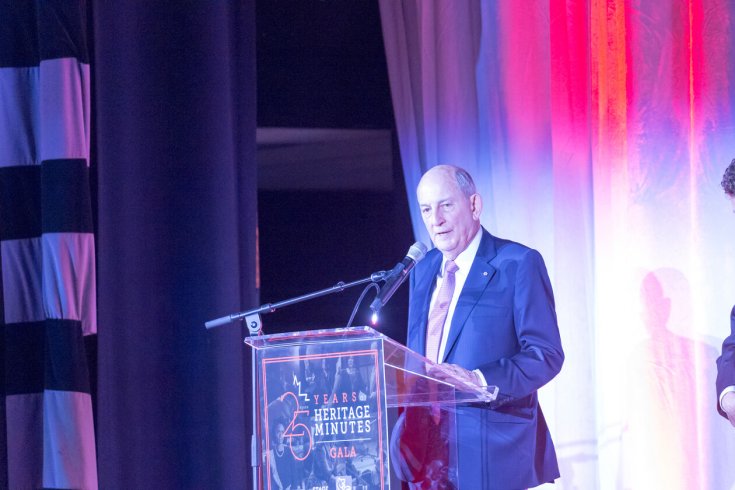 On October 19, during Historica Canada’s celebration of the twenty-fifth anniversary of the Heritage Minutes, their originator, Charles Bronfman, took to the stage. At eighty-five, Bronfman is the patriarch of an epic family whose only North American parallel is that of the Kennedys in the United States. A small, elegant man with a warm, self-deprecating smile and famously protruding ears, Bronfman opened with a crack about the final presidential debate between Hillary Clinton and Donald Trump that was about to begin in Las Vegas: “I have about a forty-five minute speech here, because I figured you would rather listen to me than to what is going on down south of the border.”

After the fanfare at the Carlu in downtown Toronto finally wound down, Bronfman, an avowed political junkie who lives in New York, stole back to the Four Seasons with his son Stephen to watch what everyone assumed would be a raucous debate. Both public figures of considerable wealth and influence, the contrast between smirking and petulant Trump and humble, pragmatic Bronfman could hardly be starker. Narcissism is now the sine qua non of weath: money, we believe, leads to blustering, deluded individuals who dramatically overestimate their own powers and, more often than not, are disconnected from reality. We’ve become too jaded, too angered by rising poverty, to accept a one-percenter as a noble figure. But his newly published memoir, Distilled: A Memoir of Family, Seagram, Baseball, and Philanthropy, Bronfman comes across as exactly that: an authentically good man, aware of his own limitations, and ultimately focused on things that matter to all of us.

Written in a conversational style that does an admirable job of mimicking Bronfman’s relaxed style of speaking, Distilled begins where one would expect it to begin: growing up with his three siblings, Edgar, Minda, and Phyllis, as the youngest child of Sam and Sadiye Bronfman, in stupendous wealth in a mansion in upper Westmount in Montreal. Insulated from the ordinary lives of Montrealers (he was an adult before he know that the city and province of his birth was mostly Francophone), Bronfman’s every need was attended to by a small army of butlers and maids and chauffeurs. His father, one of the titans of industry, controlling nearly half the market in fine whiskey in Canada and then across North America, was a remote, volatile, sometimes terrifying, and always demanding figure. From early on, he made sure his children understood that great privilege brings great responsibilities. Upon Bronfman’s bar mitzvah, his father wrote to him, “Well it is to walk with Kings, but never lose the common touch. I cannot impress upon you too emphatically the ideal of service to those less fortunate than yourself. “

A not wholly inappropriate message for a bar mitzvah—the moment when a Jewish boy becomes a full-fledged member of the Jewish community—but for a Bronfman it is also ominous: it made clear just how much was expected of him. Within a few years, at eighteen, he was an anxious wreck visiting a psychiatrist three times a week. “The doctor I saw regularly told me, “ Bronfman writes, “that if I had been destined to be a shoes salesman, I wouldn’t have to come to see him.”

The early chapters of Distilled are about the evolution of character, and its consequences; the claim that “character is fate,” attributed to the Ancient Greek philosopher Heraclitus, is richly born out by the Bronfman family. Whereas Edgar, the eldest male anointed from birth to lead the Seagram empire, was “handsome, built like a bull and he moved through life in a domineering way,” ensuring that he would be in competition and conflict with his inestimably tough, bigger-than-life father, Bronfman was more conciliating and inclined to learn from his father’s simpler, more down-to-earth qualities; coming to understand the business from the factory floor up, establishing relationships with the people he worked with, and learning who to trust and who not to. In a word, Bronfman slowly acquired the virtue of good judgment.

As the book progresses, it is full of incident, and myriad business transactions, most of which involved vast sums of money. There were landmark building projects, for instance, like the TD Centre in Toronto, which, thanks to Phyllis was designed by the great German architect Mies van der Rohe, as was the Seagram building in New York, the great city’s finest and most beautiful piece of architecture. There was the Eaton Centre, again in Toronto, also designed by a significant German-born architect, Eberhard Zeidler. There was Bronfman’s successful and to this day revered effort to bring major league baseball to Canada in the form of the Montreal Expos and Seagram’s purchase of a majority stake in DuPont, which became a staggering source of revenue through the 1980s and into the ’90s. But the real arc of Distilled leads, not to the ever-expanding wealth of the Bronfman family, but to the point when the venerable house of Seagram, as it had been known up to that point, collapsed.

The catastrophe unfolds like a train wreck in slow-motion: Edgar, betraying his family, hands over the reigns of Seagram to his dashing but inexperienced and naïve younger son, Edgar Jr., who, in turn, sells off the vastly profitable but for Edgar Jr. “boring” DuPont and purchases glittering entertainment companies like MCA (later Universal) and Polygram at the very moment when their business models began to falter in the face of the digital age. Ultimately, the family, reeling in debt, sells Seagram to a French company called Vivendi, which was itself eventually run into the ground by a preening, charismatic young sociopath named Jean-Marie Messier.

Bronfman, in order to prevent a family civil war, stood by and watched it happen in all of its heartbreaking inevitability. Perhaps Sam Bronfman would not have let this happen; he had more of a taste for power and conflict than Charles ever did. Having been with his family’s company for fifty years, and thirty years after his father’s death, Bronfman acknowledged that neither he nor his children wanted anything to do with this new, unrecognizable business and retired on March 12, 2001. “So much had been lost,” he laments. “Shareholders lost money and our family lost its identity. The Seagram building in New York, which our sister had convinced our father to build, no longer had a trace of Seagram or my family.” Ironically enough, this is where Distilled gets really interesting.

The Bronfman family had, of course, been involved in various forms of philanthropy and public service for more than half a century (they were major donors in the creation of the Israel Museum in Jerusalem in the mid-1960s, for instance). But once he left Seagram, and the liquor business, for good, Bronfman took up philanthropy systematically, as a full time job, a second career. “My professional and business success with the Expos notwithstanding,” he writes, “my greatest success in life has been in philanthropy—and not just willy-nilly, but strategically, with a sense of purpose, always measuring the results as though the mission were for private enterprise.” It is as though the son had taken the father’s imperious, almost Biblical command—“I cannot impress upon you too emphatically the ideal of service to those less fortunate than yourself”—and transformed it into something that was not patriarchal but an unsentimental and practical sense of the public good.

Bronfman’s philanthropy has, however, always also been personal, grounded in his twin sense of self as a grateful Canadian and as a proud Jew. In this regard, his two signal projects, among many, have been the Heritage Minutes and Birthright Israel. Whereas the Heritage Minutes, whose scope has gradually expanded to include unflattering passages of Canadian history, like the residential schools, seeks to engage Canadians with the reality of their history, Birthright Israel, which sends young diaspora Jews on ten-day trips to Israel, gives young Jews a personal experience of the state of Israel as part of Jewish history. For Bronfman, who has known almost every prime minister of Israel including its first, David Ben-Gurion, Israel anchors the identity of world Jewry. Both programs are efforts to make history real and present in contemporary life, and to help create more grounded and better citizens. And both programs acknowledge the ways in which memory matters in shaping characters that will have to wisely face the uncertainties of the future.

Bronfman’s philosophy of philanthropy is singular, not just because it inherits so much from the business world (programs should provide a demonstrable return on investment), but because it follows the Jewish tradition of focusing on creating communities based on common memory and knowledge. “Philanthropy,” after all, comes from the Greek and means “love toward mankind,” and there is surely no better form of service, to those who walk with Kings and those who don’t, than to help the next generation and the next move forward with clarity and integrity. This is an idea as simple as it is deep and difficult, and in the divisive political and moral climate that especially afflicts the United States but also threatens Canada and the rest of the world, it is one that we can’t be reminded of too often.

It would be interesting to know what Bronfman thought of the chaotic presidential debate he perused when he returned to his hotel room after the tribute at the Carlu. Trump was then, as he has been in the days since, impulsive, fragmented, and vindictive, contemptuous of history, and indifferent to larger civic responsibilities. A grafter, a con man, a pathological liar, he has run a campaign for the most powerful office in the world from a kitschy, self-aggrandizing golden throne in Trump Tower in Manhattan and a faux aristocratic estate in Palm Beach, taking an occasional moment off to promote a new golf resort or luxury hotel and even Trump steaks. Trump is a creature of a certain kind of American boardroom, blustering and juvenile, and Bronfman has undoubtedly met the type. Perhaps in a different era and context he would have been able to just laugh him off, but not now.

Bronfman, by contrast, is a man who has known great political leaders, like Pierre Elliott Trudeau and Shimon Peres, and more importantly understands the responsibilities that both power and privilege incur. This may sound old fashioned, but in a world where celebrity has become a value in and of itself, and where even philanthropy can seem narcissistic, Bronfman’s story should be exemplary. “I’ve come to realize,” he writes, “that my life is the story of someone who blossoms late.”