What Makes Alias Grace so Good | The Walrus
Skip to content 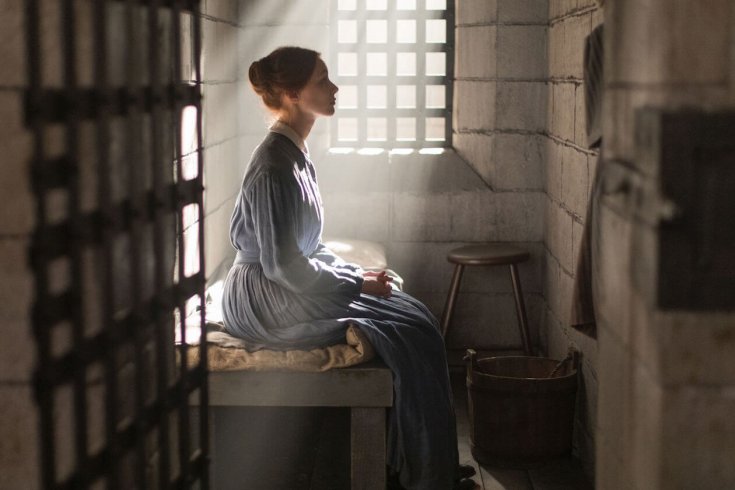 In the opening of the television adaptation of Alias Grace, titular protagonist Grace Marks stares at herself in the mirror. There, in voiceover, she contemplates everything people have called her: an inhuman female demon, an innocent victim, a good girl with a pliable nature, cunning and devious. “I wonder,” she thinks, “how can I be all these different things at once?”

With her reflection staring back, she performs each of these identities in turn. Her acting is compelling and confounding; Marks plays with perceptions of her character but refuses to define herself. We are given none of Grace’s essential nature, nothing that will carry us through her journey. It’s our first clue that Grace will defy our expectations of what makes a protagonist compelling on TV—especially when that protagonist is a woman.

In my education as a TV writer, I heard the same advice on repeat: your protagonist must drive through a story in the relentless pursuit of a goal. This gold standard of storytelling exists for good reason. Stick to it and your story will be clear, your main character a hero, and your narrative comfortable and familiar enough for people to invest in emotionally.

As Grace recounts her story, which we see through a series of flashbacks, the show’s writer, Sarah Polley, and its director, Mary Harron, make it clear that Grace’s life hasn’t ever truly been her own. We’re left with the impression that who or what Grace truly is or isn’t doesn’t matter. Outside forces are calling the shots and dictating her fate—and she knows it. Imprisoned for murders she may or may not have committed, Grace’s personhood has been controlled, both by systems (poverty, class, misogyny) and people (men).

I watched Grace’s story play out on-screen with a pang of familiarity. This lack of agency, this frustration at the ways in which the world confines you, reflects my own experience as a woman. What makes Alias Grace groundbreaking is how its narrative centres all of these feelings, these limitations. This is a story about a loss of control—and how Grace strives to get it back. She is limited, and the audience is made to feel this limitation. Women are not often allowed to manipulate this sacred storytelling framework in television. In exposing these limitations, Alias Grace feels rebellious.

Men, and male-centered narratives, have dominated the small screen from the early days of three-camera sitcoms, right through to what’s now being dubbed as The Golden Age of TV. These narratives privilege a quintessentially male experience. An experience where you get to do what you want, when you want, mostly free from systems that control your movements and decisions. The ideal of the active protagonist assumes your main character is free to act. But it’s hard to venture forth when the deck is stacked against you.

I began truly watching TV during the heyday of teen programming in the late 1990s and early 2000s. Such shows made it clear who got to lead and who had to live in the margins. Girls (along with people of colour and LGBTQ folks) were mostly objects of lust, curiosity, or scorn—and, sometimes, all three. If they were lucky, they got to be a catalyst for the male protagonist’s self-actualization. How could you not reach your full potential with Katie Holmes pouting at you from behind her turtleneck sweaters?

To earn her narrative focus, a girl had to step into the prototypically male hero’s journey; she had to be exceptional. The bar for male protagonists was so much lower. He needed only to exist with some degree of yearning. We watched him because he wants a better life or because he loves someone he couldn’t have. Dawson’s character traits were limited to living in a shitty Massachusetts town and loving Steven Spielberg, but that’s all audiences needed to head up Dawson’s Creek. In The O.C., Ryan needed only to be poor, brooding, and saved by Peter Gallagher’s eyebrows to act as our entry point into Orange County.

Conversely, Buffy had to kill vampires and save the world, while Veronica Mars had to be a teen private eye trying to solve her own rape and avenge her murdered best friend. They were groundbreaking badasses, yes, but they didn’t really have other options.

As I graduated from teen soaps to dramas, I saw the same forces at work. Mad Men, The Sopranos, Breaking Bad—all explorations of the tortured masculinity of men free to do as they please. Sure, their protagonists were all alternately punished or rewarded, but my point is that they were free to behave at all. Yes, Don’s journey was compelling. Tony’s was enthralling. I was deeply invested in Walter’s fate.

But what about the women who orbited these men, including Carmela, Betty, Skyler? Could any of the women have driven the story in the way we’ve come to expect from TV protagonists? Certainly, these shows would have been very different from the point of view of the long-suffering wives or colleagues who played support to these tortured male egos.

In each of these shows, the male protagonists limit the women around them and limit these women’s story arcs to side plots. The limitation is something that happens to the women; we rarely hear directly from them how they navigate it or how they feel about it.

As I devoured Breaking Bad, I often wondered what the show would look like from Skyler’s perspective. Walt’s relentless pursuit of success and perfection did immense collateral damage to her life, yet if she dared show anger because he had, you know, become a meth kingpin, fans pilloried her on the internet as a shrill killjoy. It reached such a fever pitch that Anna Gunn, the actress who played Skyler, penned a New York Times op-ed taking on the hatred and vitriol directed at her character.

When any woman in these shows takes control of their own narrative, the effect is seismic, so rare are these indelible moments For years, my Twitter banner photo has been a smoking Betty Draper looking down the barrel of a rifle aimed at the sky. Weeks after Peggy Olson strutted down the hallway in her sunglasses, carrying a banker’s box, cigarette hanging from her lips, my social media was littered with the image. Seeing a character in whom you’ve invested so much finally shake free of the systems that control her, if only for a moment, is profound. It makes you feel like if she can do it, then maybe you can too.

This past year, I’ve started to see more Peggy Olson moments. Even better, I’m also seeing whole a new crop of shows that are, at last, giving us more than mere moments—we are now getting entire shows that explore women’s experiences. This new wave of TV dramas refuses to settle on a passing acknowledgement of how the world limits a woman’s ability to drive her own story. Instead, these shows often spotlight that limitation, and in their refusal to look away, tell us something vital about how women are living, struggling, and achieving today. In doing so, these shows are also changing the definition of TV, ushering us into a sort of Golden Age 2.0, in which diverse perspectives, not just those of women, but also people of colour and LGBTQ folks, are gaining ground.

It’s unsurprising that Margaret Atwood is at the centre of all this. Her work often explores how a woman’s inner life can be at odds with restrictive, and more powerful, exterior forces. As a result, instead of superheroes, tough detectives, and other character archetypes modelled after men, we get powerful portraits of female protagonists. These women are flawed and complex, and, sure, they might even find themselves living in a post-apocalyptic, alternative world, but they are not required to do anything more than live. Viewers are expected to find these women, and their journeys, interesting—we don’t need love interests, men, or a zombie horde to tune in.

Alias Grace speaks to current, real-life fears about what happens when a woman’s agency and freedom are taken away. While we’re granted access to Grace’s complicated inner life, it comes with the price of knowing she is caught in a world that’s indifferent to her truth. It’s not until nearly halfway through the first episode of Alias Grace that she’s invited to her to tell her story. Her response is telling: “What part of it?”

What makes Alias Grace surprising, subversive, and, at moments, even delightful, is the way the show plays with Grace’s lack of agency and her attempts to claw back even the most minute amount of control. As the story unwinds and the narrative threads tangle, Grace becomes an increasingly unreliable narrator. Viewers realize she isn’t telling the whole story to Dr. Jordan, the man sent to ferret out the facts and hopefully exonerate her. “Just because you pestered me to know everything,” she thinks to herself, “was no reason for me to tell you.”

In that one transgressive moment, we know that Grace understands she isn’t in control—but unlike most women throughout TV history, we actually find out how that makes her feel. More than that, we are forced to witness it. It’s only then that we really begin to see Grace—not as others see her but as she sees herself. We finally hear her side of the story.