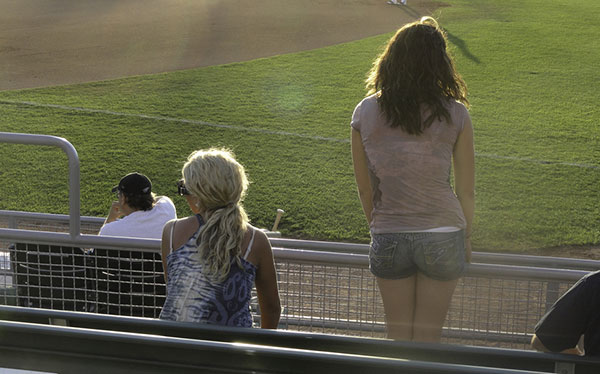 Earlier this year, I was at a Blue Jays home game when a kindly usher took it upon himself, unsolicited, to explain to me how many strikes make up an out, and how many balls are a walk. While I’m sure he had the best intentions at heart, the trouble with his instruction was that he assumed I needed it—I’ve been going to games for about thirty years.

Men tend to make these assumptions, but like most female baseball fans I know, I actually have a specialized knowledge of the game that my male counterparts may not. For example, I know what sections of the ballpark are the safest to sit in, where I am least likely to be harassed by men, or to overhear sexist, homophobic or racist remarks from the male voices around me (at the Rogers Centre, 515 and 113 are both good places, if you’re interested). I know that weekday evening games tend to be most comfortable for women, that Sunday afternoons are generally better than Saturdays, and that Friday evenings should be avoided all together. I know that the new centre field porch on the 200 level—although equipped with a beautiful view—is generally out of the question if you’re interested in avoiding aggressive, drunken masculinity. Female fans navigate the game differently by necessity, as media messaging consistently tells us this is a male space that we’re being “allowed” to enter. I am a devoted fan of the game despite and not because of the culture that surrounds it.

Men hold an overwhelming majority of the power when it comes to creating mainstream sports culture, whether it’s by being a player, a fan, or a sportswriter. Take, for example, Tom Maloney’s piece in last Friday’s Globe and Mail, titled “A new generation of baseball fans in Toronto are young, hip and cool.” The article, which breaks down results of an in-stadium survey conducted by Ipsos-Reid, reinforces the very same exclusion and hostility that I have front of mind every time I pick my seats. In it, the author attempts to explain an “astounding” jump in women’s attendance at Rogers Centre from 2010 to 2012 by lazily hypothesizing that these young women aren’t really baseball fans at all.

Through some rather biased quotation choices (“it’s the best patio in the city, the best people-watching in the city”; “we can ‘watch’ the game—in quotations”), Maloney paints a singular portrait of a woman out for a night of beer and boy watching. “Along with a number of other women interviewed for this story, she indicated the club’s eye-appealing roster has enhanced her interest,” he writes of one subject. By cherry-picking comments and manufacturing conclusions, he does his part in contributing to a long-standing image problem that many female fans rail against.

To the media at large, baseball fans of the female persuasion tend to be seen as vapid, bored, and distracted, either dragged along by boyfriends or there to party and pick up, all the while wearing their Victoria’s Secret Jays tees and drooling over Brett Lawrie. Women are there for a ladies night or a bachelorette party—certainly not for any “real love” of the game, yet they do come in handy as the occasional pretty face for Sportsnet to zoom in on.

I certainly don’t deny that these kinds of fans exist—but I cannot agree that they’re a problem. The actual problem lies in consistently putting this very limited depiction of women’s relationship to sports into the world. It does real exclusionary damage in terms of attracting new fans, a project that both makes good economic sense and goes far in improving the overall experience for everyone.

If the Blue Jays organization is in any way invested in cultivating and profiting from a new female audience, it would be wise to manage how women are marketed to, and to consider its part in the way we are treated by mainstream sports media. I mean, why would you ever want to support, with your dollars or your love, a franchise that doesn’t respect your knowledge, interest or passion for it? That assumes you are stupid, but hopes you are pretty?

This idea that women don’t really watch permeates sports. Last year, The Score Blog’s Ellen Etchingham brilliantly summed up our severely limited viewpoint of female sports fandom in her reaction to While the Men Watch, CBC’s abhorrent hockey feed for women. In it, she describes the dominant stereotype as follows: “Women don’t understand sports. Women don’t care about sports. If women watch sports, they only do so because a man pushes it on them. Women are interested in fashion, cleaning, shopping, and men.” She further articulates how offensive it is for female fans to have this heteronormative femininity constantly pushed on us by the media, as many use sports to actually escape that very thing. For Etchingham, hockey has acted as a haven, a break from strict societal norms. “For many of the so-called serious female fans, watching the game is one of the best social avenues for meeting people and hanging out in a relatively ungendered way,” she explains. “Being into sports allows us to be guys, not in the sense of men, but in the sense of participants in a laid-back, friendly, easygoing social milieu that doesn’t feel defined by gender lines. Many female fans explicitly resist the category ‘female fans,’ because for us part of what is great about being a fan is the sense that female or male doesn’t matter so much.”

On Friday, when I expressed on social media my disdain for Maloney’s limited take, I brattily retitled his piece “Why women go to baseball games, by a male sports journalist.” Several female fans got in touch to share my sentiment: women who attend games with scorecards in hand, who have encyclopedic knowledge of players, stats, and history, who have romantic ideals of the game’s meaning and the narrative it provides them. These are women who attend (and spend) with the knowledge that the system excludes and disrespects them, yet they try to carve out a space for themselves anyway. When it is so difficult for them to participate, when they have to work so much harder to be included, why would anyone ever doubt how much they love it?

The real problem with Muloney’s piece is how many male fans actually agree with his theories on why women go, and the antagonism that attitude cultivates—as if a bunch of girls chatting about wedding plans instead of paying attention is more problematic than yelling homophobic slurs and harassing women at the ballpark. It speaks to this ingrained idea that women don’t belong, which is emphasized by an appalling gender imbalance in terms of who is “allowed” to write or speak publicly about “dad’s game.” Unlike other fields, sportswriting has mysteriously remained immune to conversations about gender parity, as if we’ve collectively accepted that this is a man’s domain and men alone should speak on it. With the success of writers like Etchingham at The Score and Katie Baker at Grantland, and producers like Caitlin Kelly at newyorker.com, things are certainly changing—but it’s hard to deny women have traditionally been offered extremely limited roles in North American professional sport, most of which amount to “look pretty and say little.”

I certainly don’t deny that some people go to games simply to drink and people watch, nor do I deny that some of those people are women (or think anything is wrong with that). What is important here is the emphasis we put on female ignorance and disinterest when we talk about female baseball fandom, and the way we exclude women from the larger conversation as a result. There is vast diversity to the common fan’s personal experience of the game, regardless of gender, and like anything, any stereotypes that we reinforce only harm the overall community. It surely couldn’t have been hard for Maloney to find a quotable female fan who could talk complex stats with him, or who even had more than a passing interest in the game, but instead he chose to focus solely on expectations already supported by the status quo.

Men come to the ballpark with an assumed knowledge and interest, whereas women need to be constantly demonstrating how much they know and care. A radically different take on that Ipsos-Reid survey is that maybe, despite hostility, we’re making a bold attempt to find more space for ourselves in a culture that has omitted us. Despite what may be believed, some women deeply love what has long been considered a man’s game, and the time is overdue for the gatekeepers of fandom to accept, support, and welcome that sentiment, and for sports media to report on it in a non-biased way.

In Etchingham’s brilliant words, “Don’t tell me you respect serious female fans. If you did, you’d have found some.”