Up in the Mustafa Hotel | The Walrus
Skip to content 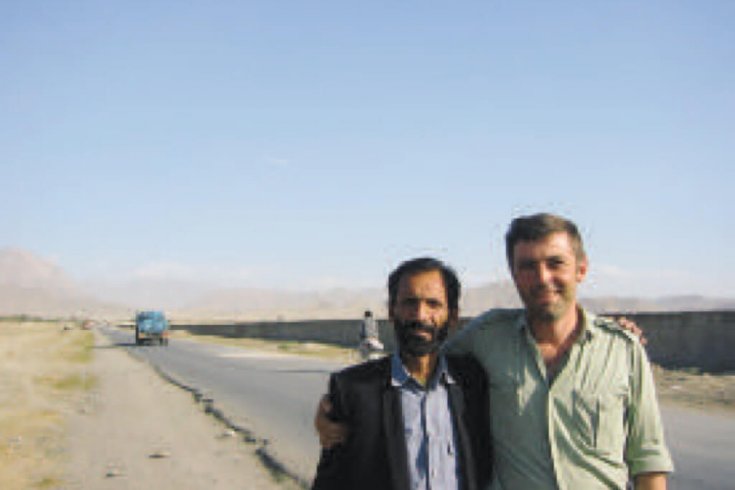 kabul — My Afghan driver, friend, and confidant, Aktar Gul, tells me that his nation today is like two pictures superimposed in the same frame: old and new, good and bad, all jostling for space in the same image. The hastily modernizing, bustling capital is at once both a sharp, colour digital picture; and an old,faded, black-and-white shot of a city and way of life that was ancient when Alexander the Great rolled through the region about 330 B.C.

Indeed, Kabul seems uncertain whether to go forward or backward. Taliban sympathizers still skulk around the halls of Kabul University, but they are careful to stay out of sight of patrols mounted by the troops of the International Security Assistance Force (isaf) and by the increasingly competent Afghan police. The down-town streets are clogged with shiny white UN Land Rovers and Afghan government Mercedes sharing the road with donkey carts and tough little Hazara workers hauling firewood to market in handcarts. In the bazaars that line the main streets in old Kabul, Persian businessmen rub shoulders with women cloaked in burqas; American special forces bodyguards brush past knots of Pashtuns in voluminous turbans haggling over the price of melons.

To illustrate his point about the layers of reality, Atkar holds his calloused hands upright and waves them one over the other. In his halting, rough-hewn English, he says, “Kabul now is very good. Before, it was very bad. But sometimes…” He pauses, lowers his voice, his piercing black eyes staring out between his fanned-out fingers. “Sometimes,” he continues, “the bad things are still there. Sometimes.”

Nowhere is the restive, ambiguous spirit of this city more evident than at the Mustafa Hotel, a white-washed building in the buffer zone between the booming downtown and the bazaars of the city’s old quarter. It was the first hotel to open after the Taliban regime fell in late 2001, and it remains one of only a handful of places in Kabul that serve liquor. From the New York Yankees logo splashed across its front to its rooftop forest of satellite dishes––some of which even work––the Mustafa is, hands down, the most colourful place to stay in Kabul.

To a reporter who’s been embedded with 1,900 Canadian soldiers in Kabul as part of the multinational isaf, a little colour is welcome. Camp Julien, the sprawling, heavily fortified Canadian fire base on the southern out-skirts of the city, exists in a bubble. The predominant shades in the camp are olive drab and grey, with a splash of silver from the barbed wire atop its looming walls. And while the soldiers quartered there have seen their share of danger and death, the place is usually insulated from most of the grim realities of daily life in Kabul by an army Canex store, where the troops can buy Canadian junk food, and a mess where Hollywood movies play almost every night on big-screen televisions.

One grimy September day, Aktar agreed to drive me into town for a day away from army life; without even asking, he headed immediately to the Mustafa. I went straight to the bar, where it’s not uncommon for patrons to swagger in slinging assault rifles or submachine guns, completely ignoring the “Leave Your Weapons Outside” sign. The “No Photography” sign is more strictly enforced. Special forces soldiers mingled with international aid workers, the occasional hippy, and a number of quiet Americans who ignored questions from neighbours but chatted amiably with the manager of the Mustafa, Wais Faizi. He’s an Afghan born in Germany and raised in the U.S., and he speaks both English and his native Dari (Afghan Persian) with the hint of a New Jersey accent.

“I started up a month after 9-11,” Wais told me later, leaning back in an overstuffed chair in his cluttered office. “The building was just about totally destroyed in the civil war after the Russians got kicked out. I spent months reconstructing the hotel, rebuilding it, and fixing it up.”

Working in the city under the Tali-ban wasn’t easy. The regime’s dreaded religious police roamed the streets beating or arresting men whose beards weren’t long enough, children who flew kites, or anyone else who violated their deranged interpretation of Islamic law. Opening a hotel for westerners was a problem-ridden venture, and a liquor licence was out of the question.

When the Taliban were brought down, and hundreds of foreign advisors, UN staff, and aid workers began flooding into Kabul, Wais found himself in the enviable position of owning the only habitable hotel in town. The Mustafa’s 180 rooms were full almost every night (some of his staff live in) and Wais didn’t turn anyone away. “We get all kinds here,” he said with a slow smile. “The majority of people coming to Kabul come to Mustafa’s sooner or later. We get a real mix here: Europeans, Canadians, Americans, journalists, soldiers, government types––all sorts.”

Wais, a soft-spoken thirty-two-year-old, is often seen brandishing his beloved automatic pistol, a gift from the muscular, heavily armed Americans who patronize his hotel almost every night. He wears it in a shoulder holster over his crisply pressed dress shirts.

The Mustafa’s Thursday night kabob parties on the rooftop patio are famous, but unruly bar patrons are given short shrift: at least once this past year Wais encouraged their departure with a few shots into the night sky. Clearly, the Mustafa is not an establishment to skip out of without paying your bill.

With other hotels and guest houses springing up around the city, the United Nations and many major aid groups operating in Kabul are now discouraging their staffs from patronizing the Mustafa. Some of the “internationals” have even opened up quarters of their own to house their staff workers. Wais is unconcerned. “The UN is really kind of snotty,” he said dismissively. “I really don’t care much for them anymore.”

He paused to observe a group of rotund American guests, automatic pistols on their hips, troop by his office door bearing bundles of antique muskets, handguns, and swords purchased in the nearby stores. “In the beginning, I was the UN’s best friend,” he said. “Now they don’t want to come here anymore.”

It’s true that the Mustafa is not exactly a five-star luxury resort. Each room is lined with steel bars, making it a sort of shark’s cage that the concierge assures guests is “for security.” The room keys fit padlocks that can be used either on the outside or the inside of the doors. The white-washed walls of the lobby and hallways are decorated with hand-painted scenes from some of Wais’s favourite movies, including Scarface, Taxi Driver and A Clockwork Orange. But the Mustafa is clean, reasonably priced, comfortable, and, above all, safe: an informal arrangement with the Afghan police keeps at least a pair of uniformed officers on duty near the hotel’s unassuming front doors.

Like many Afghans, though, Wais seems a little uncertain about the future. He clearly loves his hotel and revels in the company of the special-forces soldiers and other shadowy clientele that have helped turn Kabul into an island of stability in a country otherwise beset by uncertainty. But he also looks forward to a time when the troubles are over, the foreign troops can leave, and business returns to what passes for “normal” in Kabul. The truth is, the strain of running a small business in Kabul, no matter how colourful, is beginning to wear on him. “It’s tough, really tough,” he said wearily. “Every day the power’s going out. Every day is a struggle.”