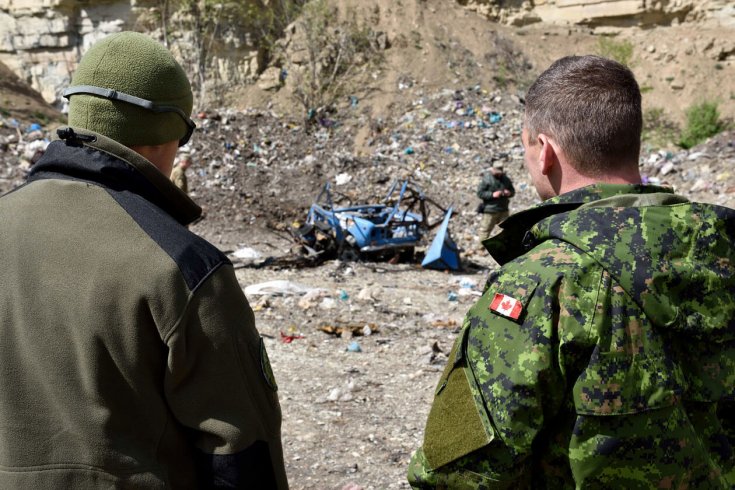 Canadian and Ukrainian solders inspect the remains of a car destroyed in a simulated attack.

Mykola Nyzhnykivskyi is like any young boy. He loves 3-D puzzles, lego, and playing video games on his iPad. He’s an enthusiastic painter, owns a pet chameleon, and recently went to his first NHL game. But that is now—nearly a year after he, his younger brother, Danylo, and three friends went scouring their hometown of Volodarske in Eastern Ukraine looking for something to do.

On that summer day, the boys stumbled upon an unexploded rocket propelled grenade.

Two years ago, Kyiv captured the world’s attention as its independence square hosted the country’s second revolution in less than a decade. A few months after, Eastern Ukraine was besieged by conflict initiated by Russian-backed separatist movements declaring their own republics in the Eastern regions of the country. The Ukrainian military was dispatched to retake cities captured by the separatists, prompting all-out war. The frontlines are now encroaching into central Ukraine, around the metropolis of Donetsk. Since April 2014, nearly 10,000 people have been killed in the conflict. In March, a United Nations High Commissioner for Human Rights report stated that the Ukrainian Government had registered 1.6 million internally displaced persons. But others lost much more than just jobs and homes. More than 21,000 are listed as “wounded.”

Mykola, now twelve years old, is one of them.

The absorption of the RPG blast by his brother’s body most likely saved Mykola’s life.

According to Tanya Bednarczyk, a Montreal native living in Kyiv who has been a key volunteer coordinating Mykola’s rehabilitation, the kids didn’t recognize the munition. “He told us that they just began playing around with it,” she says. “He said they had no idea that it could go off. When you’re that age, how could you really know what an RPG actually is, and what it’s meant for?”

The likely scenario is that the boys started roughhousing. One boy became too aggressive and pushed Danylo, who was holding the RPG. As he fell, the force detonated the explosive. RPG casing typically blasts off in irregular shaped aluminum strips, but the effects on a victim depend on range. If the victim is close enough, or in contact with the projectile, the explosion itself could be fatal.

After a blast, there is often a shadow behind a victim where the blast and shrapnel effects have been dampened. Danylo’s death and his body’s absorption of the blast most likely saved his older brother’s life. When Mykola finally regained consciousness, he immediately began asking about his brother. His mother, Alla, consumed by shock, couldn’t muster the will to tell him for months. Eventually, Mykola came to the realization on his own that his brother was gone.

Although Ukrainian surgeons managed to save Mykola’s life, it was all they could do for him. State doctors were unqualified and inadequately resourced to deal with his wounds. His family couldn’t afford private care.

“He would’ve been left in that condition if it weren’t for some woman who heard about him on the news,” says Krystina Waler, the Director of Humanitarian Initiatives for the Canada Ukraine Foundation, an NGO that has provided medical aid to Ukrainian soldiers since the war began in 2014.

The activist, Elena Kuneva, caught word of a medical mission in Kyiv that had been sponsored by the CUF, which had brought some of Canada’s top surgeons to operate on acutely wounded Ukrainian soldiers. She booked tickets for the twenty-hour train from Mariupol in Eastern Ukraine to Kyiv for Mykola and his mother. Once they arrived in the capital, Canadian surgeons took one look at the boy and decided to operate. While they worked to remove shrapnel still embedded in his face, it was clear that he needed further care. The CUF lobbied Canadian hospitals, and Shriner’s Hospital for Children in Montreal agreed to admit him if the foundation brought him to Canada.

The flight to Montreal was the first time that Mykola had ever been on a plane, says Bednarcyzk, who flew with the boy and his mother. “The looks he got when we landed in France for our layover were on different level,” she says. “Ukrainians had gotten used to seeing people wounded in the war, so sure, he would get glances. But in France people stopped what they were doing and some were holding back tears just looking at him.”

While Mykola recovers, Canadian soldiers in the picturesque town of Kamyanets Podilski in Western Ukraine, more than 1,000 kilometres away from the frontlines, are working to ensure accidents like this one never happen again. Just outside the town, Canadian combat engineers train Ukrainian soldiers as part of Operation UNIFIER. The Ukrainian government specifically asked for one of the most valuable skills Canadian soldiers have acquired from the war in Afghanistan: Improvised explosive device (IED) disposal. With the amount of explosive remnants of war (EWR), IEDs, and booby traps littering the civilian areas of Eastern Ukraine, this is perhaps the single biggest contribution Canada will make not only for Ukrainian troops, but for humanitarian relief.

“The IED threat is the number one problem Ukrainian soldiers have right now,” says Canadian Army Major Hugo Marcotte, in charge of training seventy-five of Ukraine’s most elite Explosive Ordnance Disposal (EOD) operators at the Mine Action Centre. “They’ve got booby traps all around the frontline villages they’re still fighting in, and eventually when this war is over, they’re going to have to clear those villages.”

Marcotte believes the experience is invaluable for his own troops, as well, because they are seeing scenarios which they never experienced in Afghanistan. “The other day we were working on breaking open a basement cellar and checking for booby traps, all while under sustained and accurate artillery fire,” he says. “Our guys in Afghanistan had the luxury of time when it came to disposing of explosives, but these guys might just have thirty seconds because shells are going off all around them.”

Some of the Canadian EOD operators say they’re also surprised by the complexity of the devices that the Ukrainian soldiers have to deal with. “The devices are just a lot smarter than what we saw in Afghanistan, not all of them, but some of them are really technical, and they use clever tactics,” says one operator from Alberta. “Some guys told us that the enemy will fake IED to draw in the high value specialists, then call in artillery to take them out.”

Just a few days ago, four civilians including a pregnant woman died after a 122-mm shell hit their car while they were waiting to clear a checkpoint. With the danger of ongoing conflict still a reality of life in Eastern Ukraine, the clean-up effort to rid the area of EWRs is stalled.

While it will take time for Mykola to finish his initial rehabilitation in Montreal, he will have to return to Ukraine eventually. His future will undoubtedly be difficult, in a place where people with disabilities don’t enjoy nearly the same accessibility rights and social inclusion as in Canada.

The shrapnel took both of Mycola’s legs—one amputated just above the knee and one below—and his right arm. Across his cheeks and chin weave a pattern of scars—each one a mark of a conflict that stretches well beyond the battlefield.

Christian Borys (@ItsBorys) has reported from Eastern Europe for the Guardian, VICE, and Maclean's.