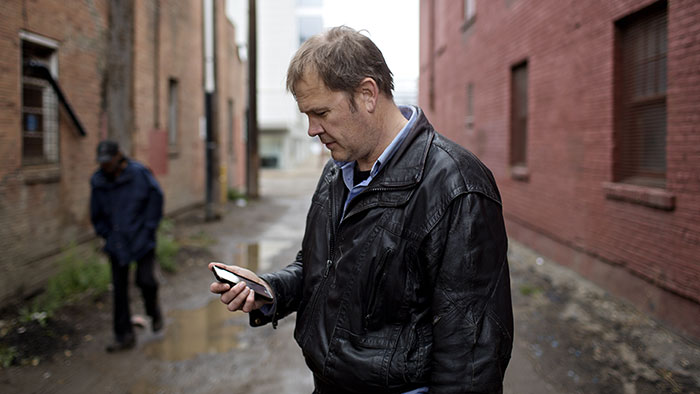 A really enjoyable morning. Took 18yr old to her grad. Dress handmade, donated shoes. Cinderella laughing with her friends in my back seat. Thu Jun 06 19:00

Edmonton youth worker Mark Cherrington finally got around to sharing this cheerful scene in a flurry of tweets written during a break between calls, his workday far from over. It is not unusual for him to be on duty well into the wee hours, nor to be using the popular social media site to document his interactions with the city’s teens, one in six of whom lives in poverty. I’m one of the 3,000-plus followers reading what he’s up to—some as far flung as England and New Zealand—perhaps because his succinct 140-character vignettes are quick and compelling, humanizing kids seen as stereotypes or statistics, if at all.

Cherrington might be especially short or tall, slender or fat. Or maybe he is completely average. All I’ve seen of him is his squished Twitter avatar. He is a background character in the drama he unfolds: the fourteen-year-old prostitute who needs a ride to school while shaking from crack withdrawal; the homeless kid who wakes up with hundreds of mosquito bites after spending the night in a ravine; the teenager charged with stealing toilet paper from a Walmart bathroom. Revelations about his personal life are restricted to the occasional brief mention of a vintage watch collection, or about his feeling too overwhelmed to take phone calls after dark.

He never had more than a half-hour at a time to chat by phone this past summer, and even those calls required him to ignore the others coming in. While his job description at Legal Aid Alberta is to show up at youth and family court from nine to five and figure out how to get minors immediate essentials such as a meal or a place to sleep, he is more like a 24-7 fixer for Edmonton’s marginalized youth. “Ninety percent of the kids I work with are getting up when 90 percent of the professionals that are supposed to help them are clocking off,” he says, his voice soft but certain. “I’d rather spend four hours at 3 a.m. than four days in court.”

He fields about sixty-five phone calls a day, nights and weekends included, while driving around Edmonton’s compact downtown and low-rise suburbs, even hitting the back roads to take kids to drug treatment centres or pick them up when their rides abandon them after a night of partying. Reviewing a recent month, he estimates that he interacted with 250 clients, not including babies; a better mediator of youth culture would be hard to find.

At forty-nine, he has been with Legal Aid for two decades already; he started tweeting a year and a half ago, in part because he knows technology is essential to staying relevant to young people. Besides, this particular technology didn’t feel like a radical departure from the daily journal he has kept throughout his career, and it was a good way to pass all of the time he spends in his car, waiting around.

His original goal was to attract 3,000 followers, a number he reached in September. Among his audience: city councillors, MPs, and MLAs, including Alberta premier Alison Redford. “It’s scary and powerful,” he says. “But my Twitter account isn’t about perfection or a clear message. It’s just about the reality of the life I’m entwined in.” He says he tries to remain apolitical and doesn’t resent followers’ privilege. “The haves can use my Twitter to just observe,” he says. “They can at least understand from an anecdotal perspective what’s really happening in our community.”

Taking 16yr girl to her social worker today. She’s been hiding her pregnancy afraid baby will get apprehended. Putting her health at risk Fri Jun 07 05:29

His clients are mostly Aboriginal and female, a population considered at high risk for addiction, sexual abuse, and poverty, so vulnerable and volatile that many social workers avoid them because they fear being accused of impropriety. “I’ve never had any allegations,” says Cherrington, whose presence on Twitter has only increased the scrutiny. In August, when he posted a close-up of a young client’s heavily made-up eyes with the caption Eyes that have seen so much…, a teacher from Ontario accused him of being “close to a line” of exploitation. He says he never posts a photo without the subject’s permission, and will engage with any reasonable feedback that comes his way. His answer to the teacher: “This is what I see. If you want fair comment, watch The National.”

At its best, Twitter allows social activists to connect with one another and an international audience, unfiltered by journalists, governments, or big non-profit brands. It happens in real time, lending a sense of urgency that can convince people to care about issues they might have ignored as a two-minute TV news story. One now-classic example is the violent aftermath of the 2009 Iranian election, when horrified Twitter users all over the world changed their location settings to Tehran, in an attempt to throw censors off the scent of local protesters. Though largely symbolic, the gesture demonstrates how the medium’s immediacy can have an intense emotional impact that makes watchers want to become involved. Or consider that when sisters Megan and Grace Phelps-Roper abandoned the vitriolic, homophobic Westboro Baptist Church in Kansas last February, Megan gave credit in part to her conversations with the Israeli blogger David Abitbol of Jewlicious.com, whom she’d met on Twitter.

Of course, the power of the medium can be risky for those who wield it. One weekend in February, Cherrington went to Edmonton’s remand centre to meet with an eighteen-year-old woman found bruised and bloodied in a motel room by the police, who then discovered an old probation warrant and arrested her. At the time, they were unaware that she had been sexually assaulted, but Cherrington assumed they were negligent, and his angry tweets quickly spread, prompting a media firestorm and the wrath of Edmonton’s chief of police, who is rumoured to have slammed his fist on a table during a private meeting to discuss the social worker’s Twitter scolding. So far, Cherrington’s bosses haven’t tugged on his reins, but he admits that his freedom is astonishing and that the moment may not last.

Laughs and cigarette smoke fill the car. #2pac is bumpin’ our ride. I wouldn’t change this moment for anything. Fri Jun 07 07:00

Cherrington’s blue 2005 Toyota Echo has a cracked windshield and 250,000 kilometres on it. The floor is littered with the detritus teens leave behind: food wrappers, knives, and bags of pot. He also stocks essentials, such as baby wipes, infant formula, condoms, and clean needles. “Twitter has shifted my work, in that I’m able to provide direct support, thanks to in-kind donations,” he says. He estimates that in the past year and a half his followers have pitched in some $30,000. “Why should I fight a principal over school fees,” he points out, “when I can mention it on Twitter and someone will donate the $149?”

Dismantling barriers faced by his clients is a fundamental goal, which is why he will occasionally strap his toddler into the car seat usually occupied by his clients’ kids. He believes it is important to expose his family to his work, to teach his three sons that disadvantaged youth are part of their community. His wife of eight years, Giselle Rosario, is used to rolling over in bed when he responds to a 2 a.m. call, though she did ask that he stop negotiating with dealers who kidnap and pimp out kids whose drug debts get out of control.

While he maintains that his clients have never “taken advantage of me emotionally,” they have stolen both his car and his bike, more than once. “Disappointment is very common,” he says. “I’ve learned to accept that it’s not a three-strike rule.” His feed stays compelling rather than depressing, because it is also full of success stories: high school diplomas earned, jobs kept, second generations off to college or university. A ride to school or a shoulder to cry on won’t immediately transform a young person’s difficult life, but it makes a difference often enough that Cherrington and his followers stick with it. “I keep trying like today is going to be the day,” he says.

My practicum student was somebody I worked with when she was a kid on the street. NOW she’s in college to be a social worker, and helping me Fri Jun 07 11:55

In advance of a rare two-week holiday in July, he handed his Twitter feed over to a few of his clients. Most of them were young mothers, who shared their own stories of the choice between keeping a roof over their heads or buying groceries. He and his clients found the endeavour so positive that they set up a new permanent Twitter feed, @MYegstrong, where youths can interact with the public. Thanks so much for the carseat someone generously gave to me, i honestly apreciate it and i feel so blesses and listened to – t., tweeted Tasha, twenty, last summer. Now a mother of two toddlers, she met Cherrington six years ago when she was released from jail into a group home for girls. He was not officially her social worker, but he still gave her rides to school, explained how to access food vouchers, and led her to an arts drop-in centre. He continues to help, even though she is no longer a minor. “Mark sticks around,” she explains.

Because that may not always be the case, he is hopeful @MYegstrong will flourish as his feed has. But Twitter advocacy is a new phenomenon, and appetites are still forming. For every courageous protester disseminating heart-stopping photos from Egypt or Bahrain, there is a histrionic North American endlessly arguing in all caps with complete strangers. I have signed out of the site more than once because a charity is clogging my feed with well-meaning but irritating hashtags. The key, I think, is to stay close to the ground, as does Cherrington, who tweets the immediate, intimate details of invisible lives. You see what he sees, and connection inevitably follows.

Put me on the street-no supports/means, uncompassionate govt. In a month I’d be in jail or dead. Wouldn’t recognize myself. Either would you Fri Jun 07 15:54

Denise Balkissoon is a freelance journalist in Toronto. She co-founded The Ethnic Aisle, a blog about race and ethnicity.
Jason Franson

Jason Franson was a runner-up for Canadian Photojournalist of the Year, awarded by the News Photographers Association of Canada.