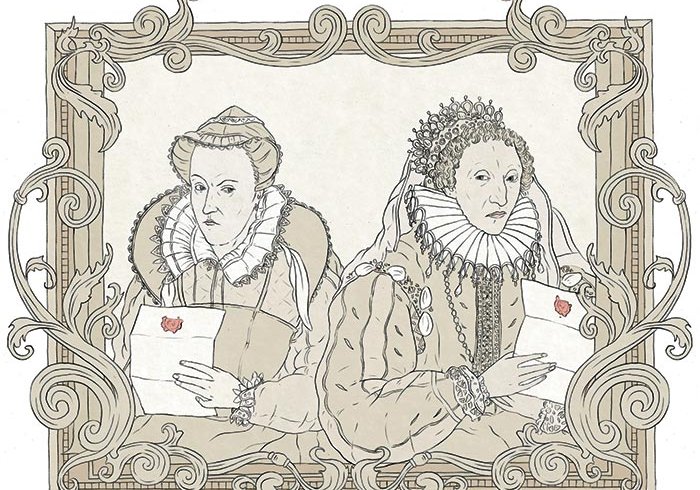 For reasons best known to her, my New Jersey–bred mother went through a Tudor phase when I was young, and I grew up reading about the royals, devouring all of Jean Plaidy’s historical novels set in the period. A somewhat macabre child, I felt drawn to beautiful, damned Mary, Queen of Scots, and would sometimes play-act the main scenes of her life—especially her execution at the behest of her rival and cousin, Elizabeth I. Later, as an adult working in London, I visited their graves at opposite ends of the Lady Chapel of Westminster Abbey and, at the National Portrait Gallery, puzzled over their likenesses in two portraits attributed to Nicholas Hilliard: Mary wears a crucifix, and Elizabeth carries the Tudor red rose, but the two cousins have the same beaky noses and red hair, and a fierce, uncompromising address to the world. Both were, after all, queens by birth.

If they looked similar outwardly, their many internal differences added fuel to their conflict—and to our fascination with them. The popular Canadian historical novelist Barbara Kyle puts it this way: “There is an Austen divide between the two,” she observes. She explores this idea in her latest addition to the Thornleigh saga, Blood Between Queens, published this spring: “Mary was all sensibility, Elizabeth all sense.”

Our collective interest in the pair tends to swing from one cousin to the other, sometimes settling on pragmatic Elizabeth, and sometimes on passionate, at times off-the-rails Mary. Currently, Mary seems to be having a moment. A new film about her is in development, which may star Irish actress Saoirse Ronan (The Host, Atonement). It is written by Michael Hirst, the man most responsible for our recent Tudor mania. He also brought us the two Hollywood films starring Cate Blanchett as Elizabeth and the hugely popular Showtime/CBC television series The Tudors.

In January, New York’s Metropolitan Opera premiered Gaetano Donizetti’s Maria Stuarda, and the Stratford Festival is showing a new translation of the play on which the opera is based, Friedrich Schiller’s Mary Stuart. The latter has enjoyed a recent resurgence, with well-reviewed productions in London and New York (after decades of ignoring the drama), and a few years ago Toronto’s Soulpepper mounted it as well. In the Stratford production, two of the finest working actors in the country take on the rivalry: Lucy Peacock as the Scottish queen, with Seana McKenna as her English nemesis. These are roles they were meant to play. As an actor, Peacock leads with her gut, as Mary did: her high-octane Lady Macbeth, in a 2004 Festival production, was indelible. McKenna, like Elizabeth, leads with her head.

“In a strange way,” says Stratford director Antoni Cimolino, “it speaks to the post-9/11 landscape, to our own religious wars. One character, Mortimer, a fanatic Catholic, is willing to sacrifice his life to help Mary—and the priests absolve him of any acts he might commit in her cause.” Rather than risk capture, he commits suicide.

In an age of schism, Mary was Catholic, and Elizabeth was born a Protestant as a result of the pope-defying wedding of her father, Henry VIII, to her mother, Anne Boleyn. A bewitchingly charming young woman, Mary followed her heart into three ill-fated marriages. The precociously bookish and scrupulously careful Elizabeth—plain as a girl but striking if not precisely beautiful as an adult—let her well-schooled head rule her, never marrying (though often coming to the verge of doing so or saying that she had). In short order, Mary lost not one but two kingdoms: France, hers by marriage until her husband the Dauphin Francis died; and Scotland, hers by birth. (To paraphrase Oscar Wilde, “To lose one kingdom may be regarded as a misfortune, to lose both looks like carelessness.”) Elizabeth, against great odds, gained one throne, and somehow hung on to it for forty-five mainly glorious years, even while France, Spain, rebels in Ireland, the papacy—and Mary—leagued against her.

Writing in 1800, in the thick of what later became known as the romantic period, Schiller takes up the story after Mary has been defeated by forces led by her half-brother and various nobles, and has fled south across the Scottish border, throwing herself on Elizabeth’s mercy. But Mary has always claimed the English throne; like her cousin, she was descended from Henry VII, but unlike Elizabeth’s claim hers was untainted by questions surrounding her parents’ marriage.

Despite Mary’s near-constant entreaties to be brought into Elizabeth’s presence, the English queen refuses, keeping her fair cousin prisoner in a series of remote castles. Plots swirl, assassination attempts are made on Elizabeth, and her spymasters gather evidence that Mary is embroiled in these conspiracies. What to do? After a show trial, Elizabeth signs Mary’s death warrant at the urging of England’s Protestant nobles. History records the doomed queen going to her execution wearing martyr’s red and, by all accounts, meeting her maker with great dignity. Nothing became her life like the leaving of it.

Lucy Peacock read Jane Dunn’s Elizabeth and Mary: Cousins, Rivals, Queens to prepare for the role. “The thing about the relationship between the two queens is that it’s personal,” she says. The letters between the pair illustrate this, how they could get under each other’s skin. Mary’s second husband, Lord Darnley, was a relative of Elizabeth’s; after his murder, and Mary’s marriage to one of the men allegedly responsible for the killing, Elizabeth responds with horror: “For how could a worse choice be made for your honor than in such haste to marry such a subject, who besides other and notorious lacks, public fame hath charged with the murder of your late husband.”

During Mary’s nineteen years—nineteen years!—held hostage by Elizabeth, when she writes to beg favours or her freedom, she often accompanies the letters with gifts, sweetmeats, jewels, and bits of her own embroidery. (In councils with her nobles in Scotland, she is said to have paid more attention to her needlework than to affairs of state.) Wheedling flattery often alternates with fits of pique: “I thought to satisfy you wholly, if I might have seen you…. I am no enchanter, but your sister and natural cousin…. I am not of the nature of the basilisk.” Elizabeth grows testy with the entreaties:

In your letter, I note a heap of confused, troubled thoughts, earnestly and curiously uttered to express your great fear and to require of me comfort…. If I had not consideration that the same did proceed from a troubled mind, I might rather take occasion to be offended with you…. Good madame, what wrong did I ever seek to you or yours in the former part of my reign, when you know what was sought against me, even to the spoil of my crown from me?

Their differences—and their twinned fates—are a gift to a dramatist, and Schiller makes full use of the contrasts. But what I have noticed on this reading is how much weight the German playwright places on their both being women, both trying to navigate in a man’s world. To punish vain Mary in her captivity, her mirror is taken away from her. Both Mary and Elizabeth take pride in their appearance, and they seek the affections of the same man. It is Schiller’s conceit that Elizabeth’s long-time favourite, the Earl of Leicester, falls for Mary, preferring her to his queen.

Neither woman enjoys the freedom that romantic writers of Schiller’s generation so valued. “What are kings and queens? ” sighs Elizabeth, as she considers a marriage of state to a French duke. “Slaves to their status. We are not permitted to follow our own wishes. My intention from the beginning was to die unmarried, and my most proud achievement would have been this epitaph: Here lies the Virgin Queen…. Should a queen… who tirelessly… performs the toughest of all duties… not be exempted from the natural law that makes one sex the servant of the other? ”

Mary’s imprisonment is more literal, but both queens feel, and are, hemmed in by their royal births. During the rare privilege of a walk, Mary grows expansive about the joys of nature. (This is Schiller, after all.) “Oh thank you friendly trees, for blotting out my walls with your green leaves. I want to dream my way to freedom and to happiness.” They each, in their time, have enjoyed immense worldly powers, but there is no exit for either.

In the end, like Leicester, the playwright vastly prefers doomed Mary, who bests Elizabeth with her tongue, in a wholly made-up meeting; he has Elizabeth’s faithful counsellor Lord Talbot blame Elizabeth for the execution and leave her service. As the years pass, my own sympathies have shifted. All I can see is Elizabeth, alone in her room with this fateful decision, one of so many in her reign: Her not doing needlework during council meetings, but paying scrupulous attention to the affairs of state. Her devoting herself, year after year, to her people’s—and, of course, her own—well-being.

Yet for all of the good governance in Elizabeth’s reign, her refusal to grant clemency to her rival remains. Schiller’s play is a sustained meditation on women in power: as Elizabeth’s high treasurer, Lord Burleigh, says to her, “Men love to see the sword of justice grasped by a man, but they can’t stand it being wielded by a woman. And if that woman is condemning another woman—no one is going to trust that process.” Puzzle over it as she might, Elizabeth could see no other way out of the situation. For the rest of her life, she bore the heavy weight of her fateful decision, and many historians continue to blame her for it, as she knew they would. This spot, this damned spot, on her reputation simply will not come out.

Ted Barker participated in the recent Papier 13 exhibit at the Laroche/Joncas gallery in Montreal.