Trouble on Turtle Island | The Walrus
Skip to content 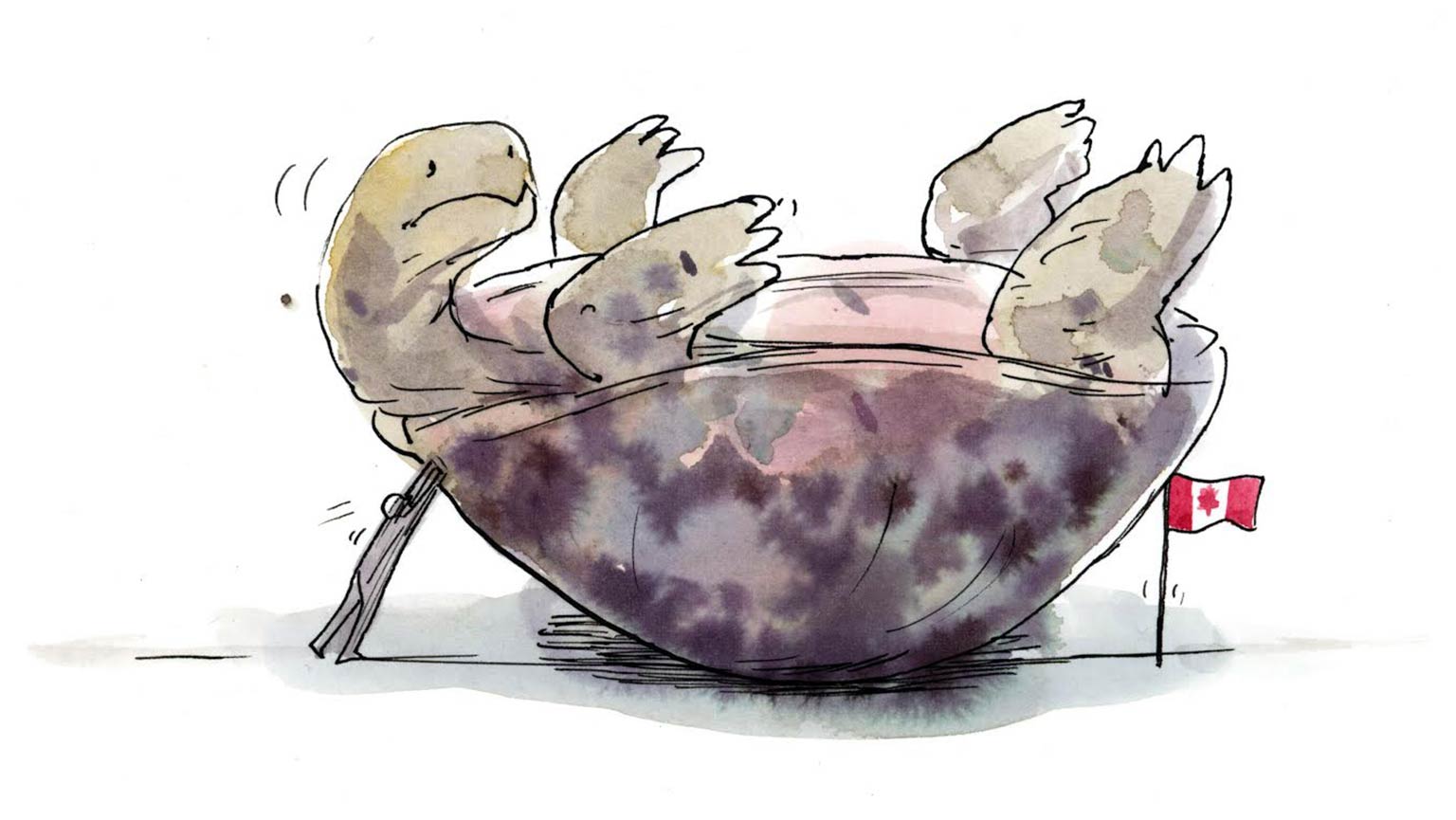 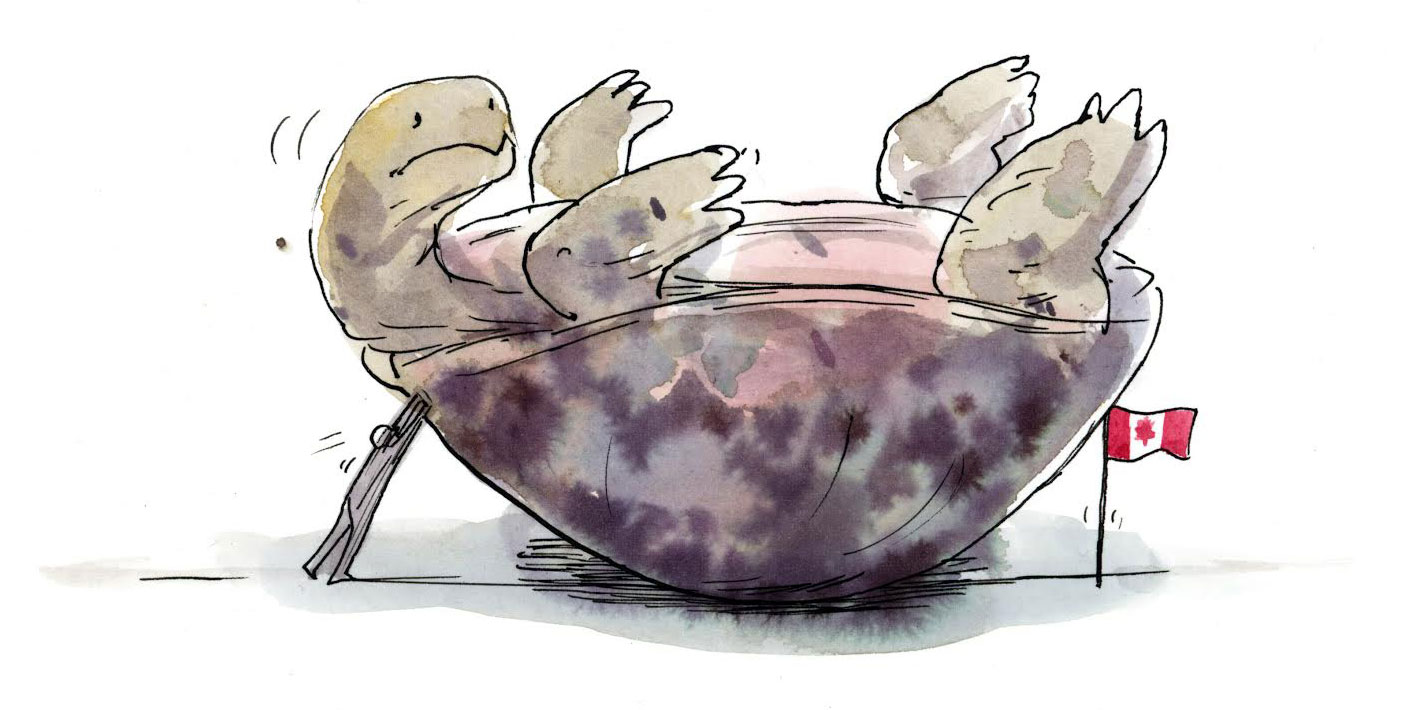 The Back of the Turtle
Thomas King

The year 2014 may go down as a turning point in Canada’s relationship with Aboriginal peoples. In March, the Truth and Reconciliation Commission held its seventh and final public event in Edmonton, capping off what the TRC describes as a “national journey for healing and reconciliation” around residential school abuse. In June, the Supreme Court of Canada unanimously affirmed the Tsilhqot’in Nation’s title to 1,750 square kilometres of unceded territory in central British Columbia, a ruling that many have hailed as a landmark decision. Coupled with the momentum of Idle No More, which began in late 2012, and First Nations opposition to (or support of) such projects as Enbridge’s Northern Gateway, Aboriginal rights are top of mind.

But not everyone thinks Canada is on a new path. In Red Skin, White Masks, Dene political scientist Glen Sean Coulthard points out that courts have handed down victories before, while the 1996 Report of the Royal Commission on Aboriginal Peoples detailed 4,000 pages’ worth of past abuses. For him, judicial rulings and the push to reconcile underscore the fundamentally “colonialist, racist, patriarchal” foundation of the Canadian state, because they focus on the “legacy of past abuse, not the abusive colonial structure itself.” Recent progress will be nothing more than a straw man unless Canada dismantles this underlying system.

Coulthard’s argument is familiar terrain for the multitalented writer and scholar Thomas King. Through books, television, and radio, he has for years critiqued the relationship between settlers and Indigenous peoples on both sides of the Canada-US border. His novels and short stories earned critical praise and commercial success in the ’90s; more recently he has scrutinized Aboriginal history and contemporary realities through a non-fiction lens, with the 2003 CBC Massey Lectures, The Truth about Stories: A Native Narrative, and 2012’s The Inconvenient Indian: A Curious Account of Native People in North America, which won the RBC Taylor Prize this past March.

King’s much-anticipated return to fiction, The Back of the Turtle, is less a history lesson on Aboriginal peoples and more a cynical indictment of twenty-first-century Canada. Nothing much happens, but this is precisely the point.

The basic plot is driven by an environmental catastrophe—a crime, really—set in the recent past. In early 2011, near Samaritan Bay, British Columbia, the agribusiness and energy conglomerate Domidion International uses an experimental defoliant, more powerful than Agent Orange, to make way for a pipeline to the coast. Known as the Kali Creek disaster, or the Ruin, the destruction is sweeping: wiping out plant and animal life on land and at sea, and devastating the neighbouring Smoke River Reserve. Those who don’t die are relocated.

The novel shifts back and forth between characters picking up the pieces three years later. It opens with Gabriel Quinn—the defoliant’s suicidal, guilt-ridden inventor—who comes to Samaritan Bay to drown himself at high tide. Mara Reid, a painter who returns to Smoke River after her family has died in the Ruin, comes across Quinn, naked on the sand. Stilted romantic tension ensues. Sonny, the delusional resident of the ramshackle Ocean Star Motel, scavenges the beach in the service of God and in pursuit of sea turtles, whose annual hatching had been one of the few things to recommend the place to outsiders. In Toronto, Domidion CEO Dorian Asher wonders where his brilliant scientist has gone, and learns that one of his tailings dams in northern Alberta has just burst. Pulling the strings on everyone is Nicholas Crisp, the eccentric owner of the Beatrice Hot Springs and a trickster with a wily dog and the diction of a pirate.

The Back of the Turtle is highly sophisticated—full of subplots, aha moments, and deep symbolism—but after 518 pages it more or less ends up where it started. Quinn hasn’t killed himself, nor has he won over Reid. Plant and animal life slowly begin to return to Samaritan Bay, including Sonny’s missing turtles; it remains to be seen whether the tourists will follow. Despite Kali Creek and the tailings spill, to say nothing of a cancer scare and an unexpected divorce, Dorian Asher continues to live in luxury, poised to weather yet another disaster with his sycophantic assistant at his side. Crisp and his own sidekick, as always, are ready for more fun.

The resolution is both abrupt and contrived, but in the circularity and carefully circumscribed character development lie the work’s true strength. King has toned down the humour and magic realism of his earlier fiction, while hammering the point (“Wham-wham, hammer-hammer!” as Sonny would say) that little changes for Aboriginal peoples, despite long struggles and headlines to the contrary.

No one illustrates this better than Dorian Asher, a litigious personification of Canada whose company name sounds more than a little like dominion. When he hears that 242 million gallons of tailings have spewed into the Athabasca River, he takes a stroll down tony Bloor Street, where he shops for silk ties at Harry Rosen and buys a watch at Royal de Versailles. He does not worry about the First Nations communities living downstream of his dam. Rather, he frets that he should have gone with the Jaeger Reverso instead of the Rolex.

Domidion’s corporate headquarters at Tecumseh Plaza resembles “a circle of Native longhouses” from the street, but the majority of it stretches underground, symbolically laying claim to mineral rights below the surface. Asher fails to recognize the living, breathing Indigenous employees within his corporate monument that purports to celebrate the nineteenth-century Shawnee leader with tired platitudes. “He doesn’t look Indian,” the shocked CEO says when he learns that Quinn, a biologist with soft features and a Ph.D. from Stanford, is Anishinabe. It’s no wonder that Asher is even more oblivious to those living in Indian Country.

When the media takes up the tailings spill and its effects on First Nations along the Athabasca River, Asher has to dodge questions about it on national television. But he knows the public is feckless:

North American Norm didn’t give a damn about the environment. Cancel a favourite television show. Slap another tax on cigarettes. Stop serving beer at baseball and hockey games. That was serious.

Spoil a river somewhere in Humdrum, Alberta? Good luck getting Norm off the sofa.

Grilled by the host of CBC’s En Garde, he prevaricates, deflecting her questions with a populist commonplace: “The modern world runs on energy, Manisha. Domidion can’t change that. The spills are unfortunate, but our first priority has to be the security of the nation and the protection of our children’s future.” Predictably, the disaster falls from the front page, consigned “to the back pages of the ‘Life and Arts’ section” or forgotten entirely.

Readers will recognize more than a little Dorian Asher in our sitting prime minister, and vice versa. In handling the tailings spill, he eschews expert opinion and diminishes the role of his board of directors—those who represent the shareholders, those who represent the public. And in the absence of any real accountability, readers may recognize themselves.

John Ralston Saul’s latest work of political criticism, The Comeback, can be read as a non-fiction companion to King’s novel. When it comes to the exploitation of Aboriginal lands—the type of exploitation Asher epitomizes—Canada has gone out of its way to avoid “addressing real, long-standing questions,” writes Saul, or “resolving real problems.” In tight, engaging chapters, he faults “deeply rooted, European-style racism” that is central to a “surprisingly colonial narrative” still very much alive, as well as a public that is “caught up in the established narrative” that Canada is not a colonial nation and simply looks the other way.

But the book is most authoritative as a call to action for non-Aboriginal Canadians. Every Canadian should read The Comeback to better understand how voter complacency and emotion have enabled successive governments to prop up the colonial system since Confederation, by dishonouring treaty obligations and circumventing court decisions that have repeatedly affirmed Aboriginal rights and title. Intentionally or not, the citizenry has accepted “deformed” policies that direct public money to fighting court orders and exploiting the Native land base without adequate consultation; rather than toward the education, housing, and clean water guaranteed in treaties going back to the seventeenth century. Saul pulls Canadians up short: “You and I pay government lawyers to fight as hard as they can to get as much Aboriginal land as possible and to give as little as possible in return. They act like rapacious divorce lawyers.”

All citizens, writes Saul, inherit “the full benefits and the full responsibilities” of the treaties signed in our name. Yet far too often, well-intended sympathy, national smugness, or a simple reluctance to get off the couch gets in the way of ensuring that the obligations outlined in those treaties—land rights, consultation, basic health care—are honoured. In shirking our responsibilities, we, the electorate, make room for the likes of Dorian Asher. Rather than continue paying lawyers to besmirch the Crown, voters need to make Aboriginal rights the defining issue at the ballot box. Doing so will have effects far beyond anything the courts can do on their own.

Saul criticizes both Liberal and Conservative policies, as well as voter apathy, but his comments about the current government’s “de-intellectualized” relationship to the governor general are especially scathing (and personal for the former resident of Rideau Hall). A prevailing “plebiscitary approach” that is both “populist and anti-democratic” has conflated the prime minister’s power with the Crown’s authority—which ultimately belongs to the Canadian people. By refusing to involve the governor general in talks with Idle No More leaders last year, for example, the prime minister effectively excluded the Canadian people from the conversation, meaning that we were not there to hold the government to account, even symbolically, for its exploitative practices toward Aboriginal peoples. We were not there to prevent the government from committing future injustices.

King and Saul seem to be asking the same questions: Is the good news from 2014 real? Will the headlines stay on the front page? Or will the drive to build pipelines and develop the oil sands, or golf courses and shopping malls, mean repeating the same old narratives? Of the two writers, Saul is perhaps the more hopeful: “Most of the problems faced by Aboriginal peoples are solvable. And our pessimism—our guilt, sympathy and dismissal—blocks these perfectly achievable resolutions.” King’s outlook is more in keeping with that of Glen Sean Coulthard. As King put it two years ago in The Inconvenient Indian, “When we look at Native–non-Native relations, there is no great difference between the past and the present.”

For far too long, the Dorian Ashers of the world have not been held accountable. Not by the media. Not by their boards of directors. Not by their caucuses. Not by us. Progress has been made, to be sure. But until the citizenry itself demands more—until a new narrative is written, read, and understood—the Domidion of Canada will continue to repeat its crimes.

The Search for Mackie Basil

Kyle Carsten Wyatt is a former managing editor of The Walrus.
X