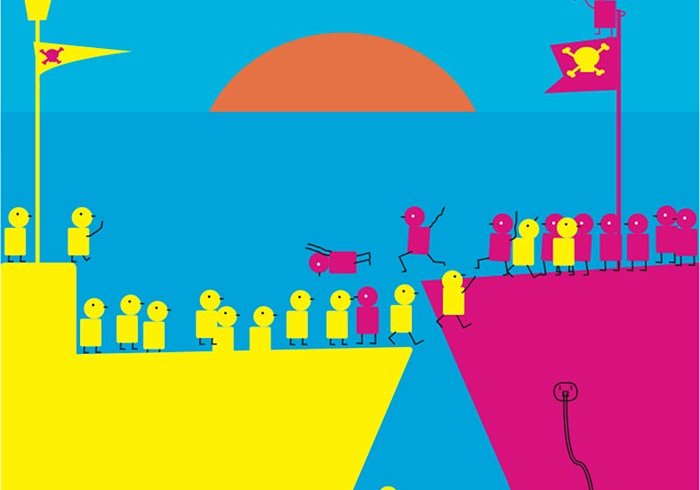 I have two televisions at home, and watch one program regularly on each. Weeknights in my kitchen, I enjoy Law & Order: svu while cooking dinner. Sunday mornings, I sit with The McLaughlin Group in my living room. On occasion I catch The Daily Show, nba Basketball, or 60 Minutes, but I’m not religious about them. Reception on both sets is hit-and-miss, limited to whatever my rabbit ears can catch.

Sometimes I love TV, but I’ve never felt the need for a cable or satellite connection. During the past year, I have seen every frame of The Office (the British version), The Sopranos, Arrested Development, South Park, Chappelle’s Show, and the bbc documentary The Power of Nightmares, along with entire seasons of Six Feet Under and Curb Your Enthusiasm. Soon I will get around to 24, Trailer Park Boys, and Deadwood.

Of the shows on that list, only 24 and Arrested Development appear on antenna TV where I live, in Toronto. (ctv’s dusty Sopranos reruns don’t count. The home team lags a full season behind hbo.) dvd collections are available for most of the other shows, though I imagine they are expensive. I wouldn’t know—I get mine for free on the Internet. I download them with BitTorrent, the latest acme of file-sharing technology, and a mortal enemy of the world’s copyright laws.

Napster, file-sharing’s original supervillain, was like Barry Bonds as a young baseball player: slick and spry. Its network was an efficient delivery tool for digitally compressed music files (i.e., mp3s), but only because they are small and relatively easy to move. Napster, to stretch the baseball analogy, scored with singles and steals. It made music free, but no more than that: the network’s architecture left it too weak to share so-called “big media objects,” such as the supersize TV files that I like to grab. (Napster’s resurrection as an online, for-profit mp3 store is as wrong as an anarchy symbol on a Starbucks cup. Pretend it never happened.)

BitTorrent is an evolution, the twenty-first-century Bonds: bulked up beyond belief, a peerless power hitter with an imperfect reputation. BitTorrent specializes in big media; it is the Internet’s top distributor of free feature films, television shows, computer software, video games, and entire music albums. Any creative work that can be copied to a cd or dvd can be—and most often is—shared planetwide via BitTorrent. Its client applications (BitTorrent is the technology; myriad programs have been built to activate it) can complete in minutes transfers that took hours on Napster, giving people who have already made their ethical peace with downloading five-megabyte mp3s the means to take 500-megabyte anthologies instead. A cynic might compare the gulf between Napster and BitTorrent to the difference between shoplifting and larceny.

The BitTorrent protocol was invented by a Washington computer programmer, Bram Cohen, in 2001. He was unemployed at the time, jaded by a string of unfulfilling jobs at uninspired dotcoms. “I decided I finally wanted to work on a project that people would actually use, would actually work, and would actually be fun,” Cohen told the New York Times last winter. More recently, Time magazine reported that he has a “Destroy Capitalism” sticker stuck to his PC.

How BitTorrent works is hard to explain. Older downloading tools such as Napster operated as one-way streets. Users wanting, say, an mp3 music file got it directly from a computer that already had it, so all transfers flowed in a straight line. BitTorrent instead creates “swarms.” Downloaders like me use a small file called a torrent to connect to dozens, even hundreds, of computers at a time. We gain access to huge media files—a full season of 24, perhaps—that have been chopped into small fragments to be easily shared among members of the swarm. My computer might download one fragment from a computer in London, another from a computer in Los Angeles, a third from Lagos. Next, it asks London and Los Angeles if it needs the fragment I took from Lagos, then sends it along if the answer is yes. BitTorrent downloads and uploads at the same time, turning file-sharing into a multi-lane highway that swaps data faster than Napster and its relatives ever could. Every computer labours for the swarm; the swarm labours for every computer.

If that still sounds complicated, well, it is. Activating your first torrent can be like alchemy. (Consider it this decade’s equivalent of programming a vcr: if stuck, ask your kids for help.) Sort it out, though, and BitTorrent grants you the ability to scan the Internet before bed, download and launch a few torrents, then wake up in the morning with a new Hollywood blockbuster, cbs drama, Xbox game, and/or the complete works of your favourite band parked on your desktop. The only cost is bandwidth, unless you count the burden on your conscience: Canada has no firm legal stance on file-sharing. The country has a long-standing levy on blank audio-recording media that theoretically allows Canadians to make private copies of copyrighted works for commercial use. But last year, the Federal Court of Appeal turned down a government attempt to impose a similar tariff on mp3 players such as Apple’s iPod. There has been talk of new, Internet-sensitive copyright legislation in Ottawa, but in the meantime, the rule is that there are no rules. But I’m straying. None of this describes what it feels like to watch torrent TV as a matter of habit. The first, best thing is that BitTorrent makes television available whenever I choose to view it. For example, I’m often out the door by the time Arrested Development airs. But thanks to BitTorrent, I can find and download the episode later on, then save and watch it at my leisure. This is “time-shifting”—moving the TV shows that I want to watch to fit my schedule. It’s all the rage in highend digital television, although companies such as Rogers expect me to pay for the privilege.

I am also forever rewinding torrent TV to hear dialogue I missed the first time through—a convenience so habit-forming that I often try to do the same with regular TV. And shows with their commercials intact are a rare find. Downloading shows without commercials means most sitcoms last twenty-two minutes, while hour-long dramas end in forty-five. Most files I download are sized to look their best in tiny windows, but the picture is passable from my couch across the room, full-size on a flat-screen computer monitor.

BitTorrent may be changing movie-viewing habits, too. Most Hollywood films are now available for download from BitTorrent networks on or before their premiere dates. Some are “cams,” low-grade videos shot inside movie theatres via concealed camcorders, à la Seinfeld. Others are “screeners,” higher-quality copies of pre-release dvds that are distributed to movie critics and industry insiders. All are anathema to the Motion Picture Association of America (mpaa), the Hollywood trade lobby leading the legal charge against BitTorrent (and funding the anti-piracy commercials that precede many current films).

In Napster’s day, the corporate fight against file-sharing was led by the Recording Industry Association of America (riaa), the music industry’s version of the mpaa. The riaa’s legal manoeuvring shut down Napster in 2001, but indirectly spurred the development of Kazaa, Limewire, and related downloading services. BitTorrent, by bringing big-media files into play, has fuelled the mpaa’s ire. The technology is a direct threat not only to box-office receipts but to dvd sales, which is where the real money is made these days. According to the mpaa’s confidential-but-leaked-online “All Media Revenue Report” for 2003, home-entertainment sales accounted for 82 percent of that year’s studio revenues. BitTorrent, I would argue, is also the reason why rental outlets such as Blockbuster are drowning—why else dismiss late fees?—and movie theatres are taking the unusual step of lowering ticket prices.

Since December 2004, the mpaa has launched international lawsuits against nearly 100 BitTorrent trackers, aiming to crush the community by staunching its hubs. The offensive worked for a while—for a few months this winter, torrent content was hard (though not impossible) to find. But now I don’t remember the last time I looked for a TV torrent and came up empty.

The reason the mpaa, riaa, and like-minded lobbies are panicked is obvious: entertainment industries, at their root, are manufacturers. They spend huge amounts of money creating content, then earn it back by selling finished products. File-sharing, the big studios and major labels argue, shortcircuits this business model. Not everyone, though, accepts their word as gospel. Even musicians, the first group of creative professionals to feel the full brunt of file-sharing, are divided over its impact: some kvetch that file-sharing keeps them from feeding their kids; others argue that the Internet turns on so many new fans that any money lost on record sales is recouped elsewhere, such as through increased tour revenues.

With the global spread of broadband modem connections likely to fuel BitTorrent’s growth, current media-distribution models—movie theatres, record stores, and commercial television—could become redundant. In that doomsday scenario, why would record labels and television and movie studios keep making content? Because blank tapes killed the music industry in the seventies, vcrs destroyed television in the eighties, and Napster ruined the early years of this decade. BitTorrent is today’s consumer crisis; tomorrow’s will carry a new and different name. In the meantime, content creators will respond in the same manner they always have: evolve or dissolve. BitTorrent is new, but the song remains the same.