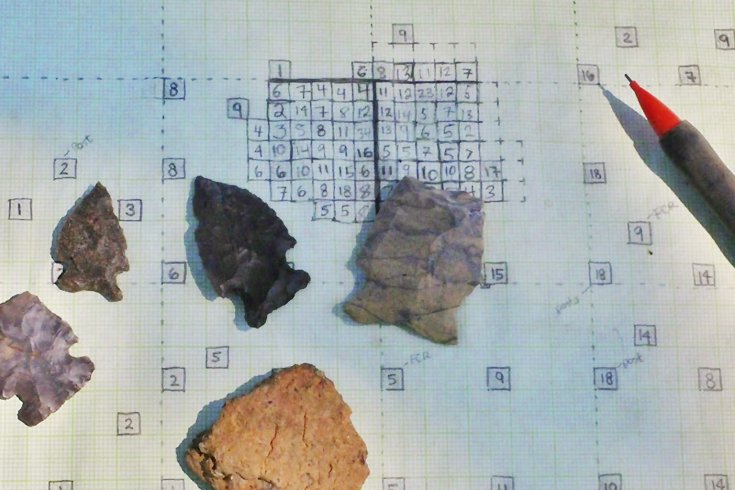 In Brant County, among the bungalows and eccentric mansions that dot the Golden Horseshoe to the west of Lake Ontario, a small laneway wends up a hill. Four of us climb the path as the landscape below opens onto quiet farmland ringed with trees. The scene looks almost timeless—and just under the surface, so close that a passing plough could spit them up—lie ancient tools, weapons, and pottery.

Rob Wojtowicz, a sun-tanned, soft-spoken field supervisor leads us to the top of the hill. With Ironman sunglasses and a baseball cap deflecting the midday sun, he wades through the knee-high grass, where a team of archaeologists is working in a small, shallow trench, shovelling dirt into clay-stained sieves and breaking up clumps of soil with trowels. The twenty-first-century technology isn’t much more advanced than the stone tools the team is hoping to uncover (a mechanical sifter lies dejected, more trouble than it’s worth).

A closer look shows that the outwardly simple process belies the complexity of the enterprise. The trench walls, for example, have perfectly shaped edges, which attest to how carefully the dig has been surveyed and mapped. Colourful flags sprout up like flowers, and indicate where artifacts have been found recently. Organization is crucial: the contextual relationships of objects are often more important than the objects themselves, because they reveal so much about the people who made and used them.

Over five years of searching, Archaeological Services Inc., out of Toronto and Burlington, has been learning as much as possible about those people before this hectare of land gives way to suburban housing development. The so-called big site has been occupied intermittently for 8,000 years—going back almost to a time when present-day Ontario’s population would have hovered around 600.

Most people think of archaeology as something that happens in sweltering jungles or sun-beaten deserts, says Ron Williamson, ASI’s founder: “Hell, twenty-five years ago, most people didn’t even know there was archaeology in Ontario.” As a young graduate student in the 1980s, he saw an opportunity to do research in the province without waiting for grants—and to make some money while doing it. Since then, ASI has uncovered some sensational finds, including skeletons in the hangman’s graveyard outside Toronto’s historic Don Jail and a nineteenth-century schooner on what was once the shore of Lake Ontario. But these represent only a fraction of its discoveries from over 5,000 projects.

In most cases, ASI’s work is a product of necessity rather than curiosity. In 2005, the City of Toronto mandated that all potential construction projects be reviewed for archaeological impact. Under pressure from the provincial government, most cities and municipalities have implemented similar plans. In fact, concern from Indigenous groups has led to some of the strongest archaeological rules in the Western world. When something that predates European contact is found, Williamson says, “it’s important to understand the wishes of its true owners. We try to involve them, and understand how they want the find managed.”

Although the Brant County site is so old that it can’t be linked to a specific nation, it lies on land claimed by the Six Nations of the Grand River. As part of ASI’s engagement policy, an Aboriginal monitor is present throughout the dig. Today that monitor is Markus Doxtater, and it’s his first day on the job. We make our way to a folding table that’s arrayed with spear tips, arrowheads, and scraping tools—each in a carefully labelled zip-lock bag. Some are dark and flaky; others are cream-coloured and veined with grey. A mysterious jasper point suggests that long ago someone made the journey from Pennsylvania. I pick up a tool about the size of thumbnail, with an edge that’s still sharp. “You’re maybe the tenth person to hold that in 8,000 years,” Williamson tells me.

Any shovelful of dirt can uncover something—a rock fragment struck off a tool, a flake of pottery—but important finds are rare. In an attempt to impress me before I drive back to Toronto, one of the archaeologists jokingly waves his trowel and shouts, “Alright, somebody find something. Paleolithic!” Twenty seconds later, Doxtater pulls a dirt-clad point from his screen. “Did you take that out of your pocket?” Williamson asks incredulously.

Doxtater smiles as the rest of the crew gathers around to congratulate him on his first find. Soon the point will be cleaned and catalogued, its composition and location noted. Then, most likely, it will go to one of ASI’s five storage facilities. Like many people, I assumed everything would be catalogued and sent to off to a museum, but while Ontario is a global leader in archaeological planning it is a laggard in dealing with uncovered artifacts. A condition of ASI’s licence reads, “By law, you are responsible for the safekeeping of all artifact collections you recover from your fieldwork.”

ASI tries to find homes for its discoveries in research centres and museums, but half of what it finds is destined to lie in storage—once again disconnected and voiceless.