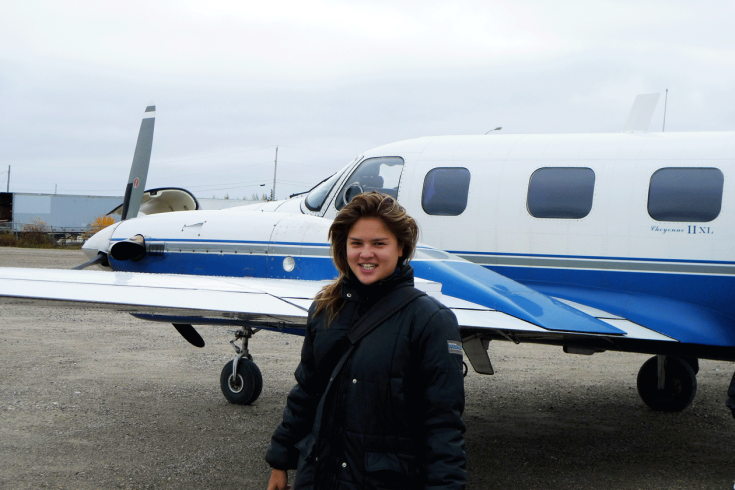 Alexandra Shimo in Kashechewan on her first visit in Sept 2010.

In 2010, author and broadcaster Alexandra Shimo travelled to the Kashechewan reserve on James Bay in northern Ontario. She was on assignment for CBC radio, investigating the story behind the 2005 water crisis. After spending four months on the reserve, the desperate conditions began to take a toll on her mental and physical health. In the following excerpt from Invisible North: The Search for Answers on a Troubled Reserve, she describes the events that led to her breakdown and PTSD.

By mid-December, I am near breaking point. When I try to examine what is wrong, unwanted images flash rapidly before my eyes: children stumbling outside the high school drugged out and in pain, teenagers’ forearms covered in the yellow craters of cigarette burns, Harold showing me scars on his skull where his father beat him. I don’t want to look any more. I don’t want to see.

It is snowing. The winds outside whip up the white flakes on this bitterly cold afternoon so walking feels like traipsing through a sandstorm. Thankfully, I am inside at twenty-nine-year-old Jared Bruce’s house. I have started interviewing people like him not because I believe that their story is related to my investigations, but simply to keep busy and avoid being alone with my thoughts. Jared is unemployed, but like nearly everyone I have met, is searching for a job. With his roommate out, he is giving me a tour of his two-bedroom bungalow, showing me the spots of black mould in his bedroom and bathroom. It’s common on the reserve because of the frequent flooding. I take a couple of photos to illustrate it as part of my reporting, but they don’t come out very well as the lighting isn’t great—just a dim bare bulb hanging from the ceiling.

We finish the interview and I sit on his couch. I begin wondering how long it will take for someone living in a house full of mould to develop lung problems.

“Do you like wine?” he asks, interrupting my thoughts.

“It depends on the type.”

He stares at me.

“You know, a Cabernet Sauvignon, a Merlot.”

He shakes his head. Why would he know these wine types? He’s living on what is supposed to be a dry reserve.

“My friend says he can get some. I was wondering if you wanted to come over on the weekend.”

“Using me for my story? So that you can become famous.”

I look at him blankly. I’m a journalist. Why else would I be here if not for his story?

I mutter something about wanting to do the right thing. No one says anything for a few moments. He starts to tell me about his niece who had set fire to the curtains and burned down her aunt’s house, but I tune out. I am distracted and confused. I don’t understand what he meant by “using me,” or why he is talking to me if he doesn’t want to be written about. A few minutes later, I leave.

Something happened between me leaving that afternoon and that night that I shall never know. Perhaps he spoke to someone who said I wasn’t to be trusted. Or maybe he was still dealing with the intergenerational legacy of the residential schools. (His parents had gone to Bishop Horden residential school, which was like St. Anne’s, a lawless and violent place, and were dealing with their own legacy of emotional and physical abuse.) Or perhaps he simply became angry at not being able to find work and living on a flood plain with a house full of mould.

That night, he sends several inappropriate messages to my Facebook account such as “races like u bitch’s don;t belong in ourrlives,we know better” [sic]. I ignore them.

The next day, there are more messages. That night, he comes to my house. Thankfully I am not home at the time, but Emma says he is looking for me.

I call the police and hear a beeping noise. The line is engaged. There are seven part-time officers, rotating on and off the reserve, and all doing shift work, which means that there’s usually only one person on duty, according to Kashechewan Senior Constable Raymond Sutherland. There is also only one phone line for the detachment so when an officer makes a call or two people dial simultaneously, the line is busy.

Waiting by the phone, I compare my situation to that of the Kashechewan Crees. I think about all the people who haven’t been able to get help when they really need it. There was Harold who hadn’t been able to find a safe place to live, and as a result, his dad had almost killed him. And Cornelius Hughie who couldn’t find a job and was worried about being able to heat his home and feed his four-year-old daughter. And Meredith White who hadn’t been able to find any help for her daughter when she tried to hang herself.

When I think of Jared, I imagine everything that might go wrong. In him, I place my biggest fears about life in Kashechewan, a story that has been repeated throughout history: that in a time of crisis, one would call out, plead with the right people, but no one would come.

I feel anxious. I need air. Leaving, I walk down the snowy streets past the sign-less video store and the wooden shack where people play poker.

The police station is at the edge of town. It’s a grey bungalow building. In the yard sits a grey GMC Safari missing most of its windows and covered in broken glass. I walk past it and try the station’s door handle. It’s locked. I walk around the building shouting out “hello!”

No one answers. I lean against the building, waiting. After ten minutes, I walk home.

That night, I try to sleep, but cannot. At 4:00 a.m., I drink a couple of glasses of my bootlegged vodka, take three sleeping pills, and drift into a fragile sleep.

Over the next few days, I don’t tell Jill or my family what is going on. They are upset that I am still living on the reserve after I explain some of the dangers, including the arson problem, lack of fire department, and overwhelmed police service. When I complain to them, and hear their worry and fear, it makes me feel worse.

Rather than speak freely, I begin tuning out. I stop leaving my house, except to go to the Northern. I cancel interviews. I drink heavily.

The situation appears to die down by the end of the week. Jared’s messages stop, and he ceases coming to my house. But I cannot let it go.

How dare he think he could bully me into dating him? And why the fuck does he dare to show up at my house?

Things come to a head after what happens with Natalie. It’s a cloudy Saturday night and one week after Jared had shown up at my house. The street lights are dimmed as usual in Kashechewan, presumably to save money on electricity. I have ventured out of the house to try to start interviewing people again. I have seen a group of five girls around the ages of twelve to fifteen, standing around outside the skating rink, smoking and laughing.

As I walk by, one of them, thirteen-year-old Natalie, a non-smoker wearing an oversized black parka, steps away from the group and towards me.

Poor thing. Me, too.

Instinctively, I step forward. My arms encircle her body. She starts to shake.

I look up at the rest of her friends. Two have their hands over their mouths. I look for sympathy and tenderness. But the creases around their eyes are turned upwards.

They are smirking. Why?

I see the scene through their eyes. It looks like a lesbian in a romantic embrace with a child.

I look down at Natalie. She’s not crying but laughing. They’re framing you.

Panic sweeps through me. My arms loosen. And then outrage. I remember the angry notes from Jared, being chased by stray dogs, watching children being stoned, kids calling out “lesbian” outside my house, and the fruitless walk to the police station.

Prickly currents of rage jolt through my arms. I grab Natalie, pinning her arms to her sides. Then I push.

She is lying in the snow with her eyes closed.

She opens her eyes and her body jolts with life. “You bitch,” she hisses.

“You cunt!” shouts out one of her friends.

“Sorry,” I say, stepping towards her. I kneel down offering my hand.

She grabs my scarf and it tightens around my neck. I begin to choke.

I grasp it with both hands and pull as hard as I can. She releases the scarf and I fall back.

I look up. Three teachers, two women and a man, all in their twenties, are standing on the other side of her group of friends. I hurry towards them. They encircle me protectively.

“I didn’t mean to; it wasn’t my fault; she was trying to trick me.” My excuses run together.

“They were playing a prank. It wasn’t your fault.”

I glance at him. From his look of surprise, I can’t tell whether he really believes what he is saying or is just trying to make me feel better.

“Am I going to be okay?” I ask. He raises one eyebrow.

“People are going to talk.”

Two days later I buy a plane ticket and leave the reserve.

Excerpted from Invisible North: The Search for Answers on a Troubled Reserve by Alexandra Shimo © 2016, Alexandra Shimo. All rights reserved. Published by Dundurn Press.

Alexandra Shimo has written for the Toronto Star, the Globe and Mail, and Maclean's.

How the UK Is Winning the Race Against Climate Change