This Thursday, the United Nations recognized Palestine as a non-member observer state. Predictably, Canada, the United States, and Israel were three of the nine countries that opposed the symbolic bid, while 138 countries voted in favour. Israel responded by announcing 3,000 new settler homes in the West Bank. And Canadian Minister of Foreign Affairs John Baird, upset at what he called the UN’s “utterly regrettable decision to abandon policy and principle,” recalled our diplomats from Israel and the West Bank.

Earlier, Palestine Liberation Organization spokeswoman Hanan Ashrawi told the Toronto Star that she was disappointed, but not surprised, by Canada’s opposition to the vote. “For the last few years the Harper administration has taken a shrill and hostile tone which is seen by the Palestinians and the Arab world as being blindly in support of the occupation,” she said. “We know the Canadian people do not think that way.”

Meanwhile, Syrian communications have been disrupted since Thursday, in a nation-wide Internet and phone blackout. Several times during the country’s current uprising, such blackouts have heralded the launch of government attacks. This time, some offshore Syrian servers have survived, and protesters are also using satellite connections to post YouTube videos of public demonstrations.

Closer to home, Canadian environmentalist Rebecca Jeanette Rubin, allegedly a member of the radical Earth Liberation Front, has surrendered to the FBI after hiding in Canada for ten years. She was wanted for arson, among other charges, in the “largest eco-terrorism case in United States history,” according to a statement by the Justice Department.

News broke on Monday that Bank of Canada governor Mark Carney has been appointed to lead the ailing British economy as the Governor of the Bank of England. George Osborne, Britain’s Chancellor of the Exchequer, praised Carney “as quite simply the best, most experienced and most qualified person in the world to do the job,” while Canadian Finance Minister Jim Flaherty said, simply, “his loss will be felt.” Carney starts work in London next July. He already has his work cut out for him: inflation in Britain is high, as are fears of another recession, and the financial district is in disarray.

Another shocker: after a private member’s bill that would have allowed generic drug manufacturers to produce cheap, life-saving medicines for poor countries went unopposed by big pharma, the Conservative Government blocked its passage. Tory MPs have been reluctant to explain why.

Meanwhile, things remain unstable for beleaguered tech giant Research In Motion, whose BlackBerry 10 is expected early next year. Recent reports from National Bank Financial and CIBC were hot on the company’s prospects, but analysts elsewhere remain skeptical. Research out of Kantar Worldpanel ComTech, for example, shows that the company’s US market share is now just a paltry 1.6 percent.

The biggest public expenditure in Newfoundland and Labrador’s history, the $7.4-billion Muskrat Falls hydroelectric complex, has secured a federal loan guarantee of up to $6.3 billon over a period of thirty-five to forty years. Protesters have accused all parties of failing to consult with the public, while Quebec’s government is: (a) upset it never got such help for its hydro projects, and (b) wary of new competition in the energy market.

Mayor Rob Ford won’t have Toronto to kick around anymore—or will he? On Monday, a judge’s ruling ordered the embattled mayor out of office, and seemingly barred him from city politics till the end of the current term (in 2014). Today, though, the same judge clarified that Ford’s term ended with his removal. If Toronto chooses to have a byelection rather than appoint a caretaker mayor, Coach Ford is eligible to get back in the running. 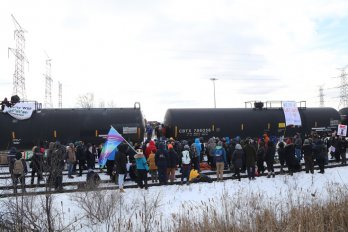